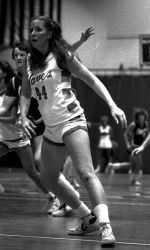 Former Pepperdine women’s basketball forward Maureen Formico-Caloiaro will be inducted to the West Coast Conference’s Hall of Honor next month.

The San Jose native, who was inducted into the Pepperdine Athletics Hall of Fame in 2011, set a program-record 2,190 points in 114 career games, while averaging a double-double for her career with 19.2 points and 10.4 rebounds.

Following a solid freshman season in 1982-83, Formico-Caloiaro was a standout sophomore who averaged a team best in points (18.7 ppg) and rebounds (10.3 rpg) en route to being named to five all-tournament teams, including the WCC Tournament.

The best offensive season for any Waves player took place during Formico-Caloiaro’s junior season in 1984-85, despite her playing through a slow start while recovering from a broken collarbone from a summer pick-up game. As she recovered, Pepperdine saw its fortunes improve, as the team won 9 of its final 14 games. Formico-Caloiaro set program single-season records for total points (713), scoring (24.6 ppg), field goals (301) and free throws made (154). She also recorded single-game records for field goals made (19), free throws made (17) and rebounds (33).

For her performance, Formico-Caloiaro was one of just three Waves to earn All-American status in her junior and senior seasons. The West Coast Conference, which began to sponsor women’s basketball in 1985-86, saw Formico-Caloiaro lead the league in scoring (22.9) and rebounding (11.6), in which she was named to the All-WCC first team. Her statistics ranked 19th and 21st in the nation, respectively.

Formico-Caloiaro graduated from Pepperdine in 1986 with a degree in physical education and was drafted into a professional league in the United States before playing overseas in Spain a year later. She has worked in the insurance industry ever since, but was still heavily involved in the basketball community by serving as an assistant basketball coach for the Archbishop Mitty High School women’s basketball team for eight years. She will be the eighth Pepperdine inductee since the inception of the Hall of Honor ceremony eight years ago, following Doug Christie, Gail Hopkins, Wayne Wright, Dana Jones, Katherine Hull, Mike Scott and Dane Suttle.

The WCC Hall of Honor Induction Ceremony, which will take place at the Orleans Arena in Las Vegas in the midst of the WCC Basketball Championships, will be held on Saturday, March 5 at 9 a.m. in the Orleans Hotel.

'You Should Never Take A Photo; You Should Create It' 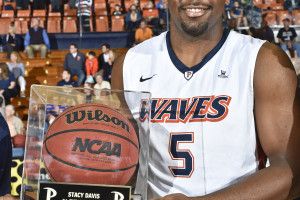 Photo courtesy of Martin A. Folb, Pepperdine Athletics All good things must come to an end, and Pepperdine men's basketball...
Copyright 2013 Jupiter Premium Magazine Theme
Back to top