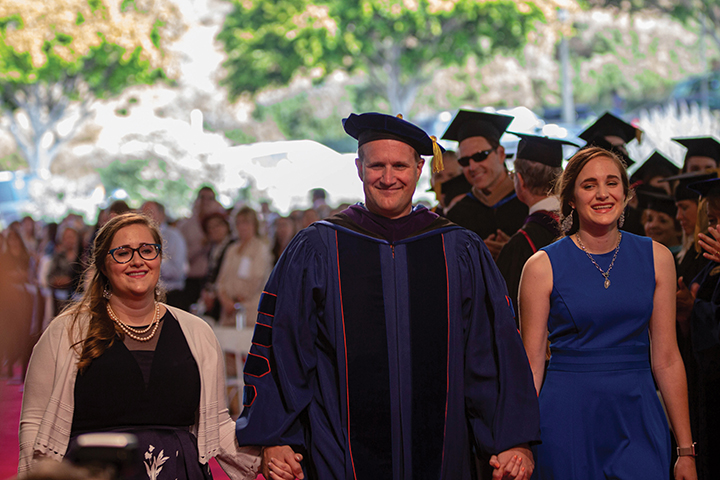 “The world needs more Pepperdine in it. Our mandate, our unique gift to the world is our students,” President James A. Gash said Wednesday morning at his inauguration ceremony to the crowd of students, alumni, faculty and distinguished guests at Alumni Park.

Gash’s inauguration is only the eighth in the university’s history.

“To my kids Jessica, Joshua and Jennifer, I could not and would not do this without you,” Gash said. “Your wit and wisdom and full encouragement energizes me daily.”

Gash took to the podium with a box of tissues, warning that during his speech he might be a bit emotional. He thanked his wife and family for supporting him and following on his journey.

“The next president of Pepperdine believes in promises,” Joline said. “He is a promise maker and a promise keeper. He is a man of deep faith and intellect and impeccable integrity.”

Gash admired the medal and joked that on the back the inscription read, “Present at any Chipotle for a free burrito.” He returned the gift by offering Davenport and Benton customized “Waves” license plates.

Gash’s speech took on a more serious note as he described a vision of Pepperdine as a training ground for future leaders and asked the audience to follow him in this dream.

“Today isn’t even remotely about me,” Gash said. “It’s about our students.”

He reminded the audience that the students remain the primary focus of Pepperdine and he promised that he would help students through whatever obstacles they face. One challenge Gash addressed was mental illness. He described a resilience and strength program which would enable Pepperdine to deal with anxiety and depression.

“If [mental illness] is what our students are facing, we need to respond with deliberate speed and decisive force,” Gash said. “Our students need the kind of strength that can produce sustainable health in thinking, believing and relating. Therefore, we must strengthen our students in three important ways. They must be strengthened intellectually, spiritually and relationally.”

Gash also outlined goals in promoting and accelerating diversity in faculty and the student body, as well as expanding international programs to developing nations such as Uganda.

Chief Justice of Uganda Bart Katureebe and the Ugandan delegation travelled the greatest distance to attend the event. Katureebe expressed his hopefulness that the partnership between Pepperdine and his colleagues will continue to correct the injustices in the Ugandan legal system.

“The Ugandan Judiciary and Pepperdine have long had a close working relationship which has grown over time with the help of now president, Jim Gash,” Katureebe said.

Video by Savannah Welch for NewsWaves 32

“A presidential inauguration at Pepperdine is a rare and significant event,” Feltner said. “Since Pepperdine was dedicated on September 21, 1937, the United States has inaugurated 23 presidents, but today’s inauguration of James A. Gash is only the eighth such ceremony for a new president in the history of Pepperdine University.”

Feltner emphasized that this day was more meaningful than the commencement of a new presidential term — it was the beginning of a new vision for Pepperdine inspired by Gash.

Representatives from a number of different groups made addresses directly to Gash.

California Sen. Henry Stern, of District 27, shared his affirmation of the university’s mission as well as his respect for the character of the new president.

Phil Schubert, president of Abilene Christian University, spoke for the academic delegates. Schubert expressed his wishes for Gash and the university.

Dean of the School of Law Paul Caron revisited Gash’s time at Pepperdine’s law school, commending him for his accomplishments as associate dean.

“Jim’s greatest legacy at the School of Law is in the lives of his students,” Caron said.

Daniel Rodriguez, divisional dean of religion and philosophy, spoke on behalf of the Pepperdine faculty. Rodriguez pledged support to Gash on behalf of all of the faculty.

“It’s my privilege to pledge our support to your presidency,” Rodriguez said. “As well as our best efforts as mentors, educators and scholars.”

“I speak for many of my peers when I say that we are extremely confident and excited to see what change President Gash brings to Pepperdine,” McCune said.

Benton offered Gash the gift of a Bible which belonged to George Pepperdine.

“I wish I could say, President Gash, that [this Bible] contains the secret to what Pepperdine could become, and especially how,” Benton said. “But that is for you and for our faculty to discern through humble leadership and service.” 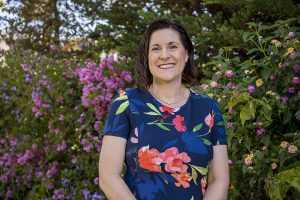 Photos courtesy of Pepperdine UniversityJoline Gash began her role as the first lady of Pepperdine in August and has since...
Copyright 2013 Jupiter Premium Magazine Theme
Back to top