I’m Ready For This Election To Be Over 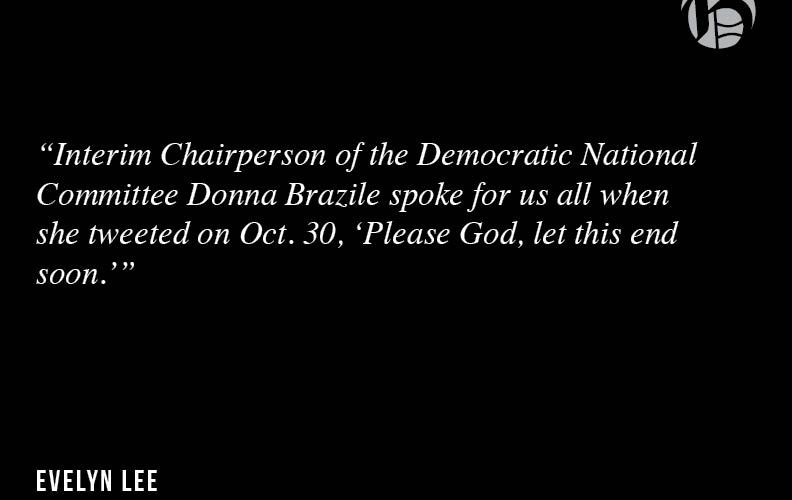 When this article is published, there will still be several days left until the election. But soon, (Tuesday to be exact) the day will arrive where the United States will finally determine who will sit on the Iron Throne — I mean, in the Oval Office. Excuse the Freudian slip, but sometimes this election has felt about as bloody as “Game of Thrones.”

To sum that data up: this election is a mess, people hate each other more so than usual and the end is so near we can taste it but somehow still too far away to handle.

Interim Chairperson of the Democratic National Committee Donna Brazile spoke for us all when she tweeted on Oct. 30, “Please God, let this end soon.” All that said, here’s a non-comprehensive list of what I’m most looking forward to post-this-election-cycle-from-hell-2K16.

Family dinners. The big one, Thanksgiving, is right around the corner, and as always, it promises tons of loaded questions and debates (about the election and not). Although I’m not excited about the series of “What will you do with your degree?” or “Do you have a boyfriend yet?” questions I’m bound to receive, at least discussions about the election can all be ended with a resounding, “Yeah, but ___ won so it doesn’t matter anyway.”

I’m really excited not to hear Trump’s name, voice or see his face on TV all the time. With every major news network currently sounding more like a series of Trump roasts rather than actual news, we’ve missed out on a lot of news unrelated to whose genitals Trump has reportedly grabbed. For example, did you know Venezuela is currently in chaos, that South Korean protestors are demanding their president’s resignation, or that ISIS has recently executed 232 people? If you did, I’m proud of you, but if you didn’t, I really can’t really fault you.

I’m also really pumped not to be as terrified of Facebook comment threads. As vitriolic as they usually are, they’ve gotten especially bad this election season, since people continue to believe that they can either change someone’s opinion on the election via the Internet or if they can’t, at least they can get really riled up and angry about the world in the process.

Lastly (for the sake of this article anyway), I’m excited to see what “SNL” and late night talk shows can come up with, now that one of their main sources of content fodder is quickly disappearing. (Although, with the rumored creation of Trump TV, this election might just be the gift that keeps on giving.)

But regardless of what side of the aisle you’re on, I think many of us can agree that come Nov. 8, win or lose, at least we can say we’ve survived this mess of a year and this bigger mess of an election — so let’s drink (apple cider?) to that. 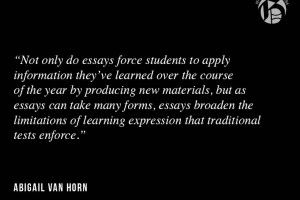 Graphic by Nate BartonIn college (and in high school) many of us expect that our grades will be the product of a representative...
Copyright 2013 Jupiter Premium Magazine Theme
Back to top