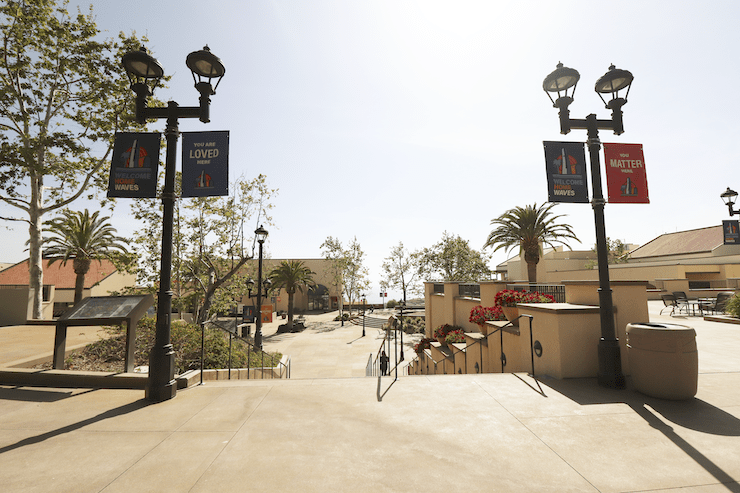 Drescher has housed students who qualified for hardship housing for the 2021 academic year — two students lived in each apartment, allowing students to have their own bedrooms. Due to the outbreak, Housing and Residence Life moved randomly selected residents to first-year residence halls in an attempt to reduce capacity and allow for single-occupancy apartments and suites.

“Out of an abundance of caution, and because of this uptick in positive cases in students living in this residential area, we are moving students to one per apartment or suite proactively as an additional infection control measure,” according to the April 11 email sent to students living in Drescher. “We anticipate this relocation to last for a duration of approximately 2 weeks. However, this could continue for a longer period of time dependent upon additional cases.”

Between March 25 and April 7, 36 Pepperdine community members tested positive, including several student-athletes — the first epidemiologically linked outbreaks to date, according to an April 7 Public Relations email. The three campus outbreaks linked student-athletes, Lovernich Residential Complex residents and Drescher residents. The University has recorded 118 COVID-19 cases for spring 2021 as of April 13, 92 of which were on campus.

In an April 7 President’s Briefing recap provided by Public Relations, the University provided control measures to further reduce COVID-19 risk on the Malibu campus including reducing the capacity of Lovernich to one student per room. Randomly selected Lovernich students moved into Seaside over Pepperdine’s four-day weekend April 2-5, following a visit by LA County Department of Health on April 2.

“The decisions we’ve made this week are due to what the county health has asked of us,” wrote Drescher Resident Director Katy Flinn in the Drescher residents “New Drescher Spring 2021” GroupMe chat on April 11. “They required we get the testing and then when a certain number of people can back positive they said we needed to go to single occupancy.”

The decision to move students was not based on LA County Department of Public Health regulations but rather preventative guidance and proactive measures on the part of the University, Taylor said.

The Drescher residents received an email around 8:15 a.m., informing them of the potential move and 65 randomly selected students received new housing assignment around noon and instructions to relocate that same day.

“Failure to comply may result in referral to Community Standards,” according to the April 11 email sent to relocated students. “Additionally, failure to comply may impact the ability for Pepperdine to continue housing residential students on our campus.”

Miller’s roommate was selected to move out of their apartment, but because she was out of town, unable to make the move on Sunday or Monday and was not granted extra time to complete the move later, Miller volunteered to move in her place.

“I don’t know what would have happened if they hadn’t let me move instead,” Miller said. “I don’t know if they would have just locked Courtney out of the room and kept her stuff hostage until there could be a disciplinary hearing or what.”

Students had access to their old room and new room from 10 a.m. to 10 p.m., and lost access to their old apartment after 10 p.m., HRL encouraged students to maintain social distancing and wear a mask while moving and did not allow visitors to help. HRL did not provide students with resources to assist them in the move, Drescher resident and senior Alexa Ray said.

“Everyone was left on their own,” Ray said. “The RDs and RAs were like ‘sorry! We can’t really do much, if you need help, email Housing or leave them a voice mail.'”

Having to move again after moving to Malibu on March 30 and completing a 10-day quarantine in their apartment on April 9 put Miller in an awkward situation as a student receiving a hardship housing exemption.

“They seem to make it out like when you complain about this whole process that you’re being ungrateful,” Miller said. “They really emphasized how they’re making an exception for us, but people asked for these exceptions for a reason.”

Miller said students living on campus understood their situation with hardship housing exemption made it necessary for them to follow certain standards regarding COVID-19 protocols, but the timing felt rushed and stressful.

Seaside and the first-year residence halls are suite-style housing with a shared bathroom and common space in the suite. The suites normally house up to eight students, but for the next two weeks — or permanently if the student chooses to remain in their new assignment — the suite will house one student.

The suite-style residence halls also lack kitchens for student use; none of the first-year halls have kitchens and Seaside’s communal kitchen is closed per county public health regulations.

Relocated students received a 300 meal point credit to their student account to be used at the Waves Café, which will only become available to them after exceeding their current meal point balance.

HRL wrote if students chose to remain in the suite for the remainder of the school year, their housing rate would be prorated at a lower cost. The email did not indicate if students would receive a discounted rate for living in suite-style housing for the next two weeks.

Miller said they don’t mind living in E. Pengilly House because of its proximity to main campus, as being without a car and living in Drescher presented them with challenges getting around campus. However, Miller said they are unsure if they will make the move permanent for the rest of the semester.

While Pepperdine strives to prioritize students in all things, the health of the community remains a priority, Taylor said.

“The truth is, a small amount of inconvenience in the short run will be so much better for all of us in the long run,” Taylor said.