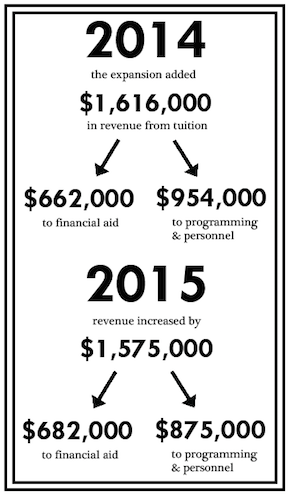 What started two years ago as a proposal by Provost Rick Marrs, then the dean of Seaver College, is now an active initiative to expand Seaver’s student population.

As of fall 2015, the Seaver enrollment population was approximately 3,200 students; over the next 10 years the initiative hopes to reach 3,664, which is the maximum number of students allowed at Seaver.

The cap on number of students is determined by the County of Los Angeles and the California Coastal Commission and is based on the impact of a growing population on the surrounding area. Issues such as traffic and water reclamation come into play, Marrs said. The initiative started adding increments of students, which are around 18 per year, in the fall of 2014. To determine the ongoing success of the initiative, a number of different factors are looked at after each year of the ongoing expansion.

“It’s really set up in such a way that every year things are analyzed … you’re kind of looking at 10 to 12 one-year growth plans, because if at any point we think that it’s not improving the experience at Seaver, then we would either shut it down or put it on hold until we’ve fixed what we think the issues were,” Marrs said.

Mike Feltner, dean of Seaver College, agreed with Provost Marrs’ view of the program in regards to looking at it as a collection of yearly programs that require annual assessment.

“It is something that has to be monitored and assessed and reviewed annually, and will continue to be tweaked along the way,” Feltner said. “We are collecting a number of metrics to assess how the program is going. How is it influencing the quality of the incoming classes? How is affecting the student-to-faculty ratio? How is it affecting class size? There’s a number of metrics we’re monitoring during the course of the program as well.”

The initiative was first proposed because the number of Seaver applicants was consistently increasing from year to year. The question was raised: How many quality students is the university turning away because of its limited size? According to Marrs, he was tasked with looking into the issue of a proposed expansion.

“Eventually, I pulled together a task force that had faculty on it. It had administrators, it had staff from key areas that might be impacted, and we began to work on it and look at every possible angle we could think of,” Marrs said.

Cyndia Clegg, former president of the Seaver Faculty Association, was one of the “task force” members Marrs approached to help draft the proposal. She ended up being the only faculty representative, but was ultimately joined by Mark Davis, the vice president for student life and dean of Student Affairs, several department chairs and members of University Advancement, according to Clegg.

Clegg also said one of the biggest underlying issues to be addressed by the group was the fact that, due to the growing popularity of the university, Seaver was expanding regardless, with or without regulation from the administration.

“Probably for the last 10 years Seaver has been growing anyway, but not with any kind of a plan,” Clegg said.

When asked about the growing Seaver population, President Andrew K. Benton said, “I think the growth of Seaver College, if it’s done carefully, with faculty engagement and with good planning ahead of the actual growth, is a wonderful opportunity.”

From a logistical standpoint, one of the goals of the initiative is to have incoming and outgoing classes be of equal size, ideally around 900. Being able to determine the number of students coming in with a high degree of accuracy will make preparing, in regard to faculty and number of classes, much easier and more efficient, according to Marrs.

Clegg said she agreed the benefits of the planned expansion should minimize some of the issues that have come with past unregulated growth.

The expansion has already brought in additional funds that have been allocated to the advancement of the Seaver experience. Additional faculty have already been hired, first focusing on major courses with larger-than-average class sizes, according to Marrs.

Marrs added that the initiative is not solely about increasing revenue but, “on the other hand, overwhelmingly where Seaver College gets money to improve things academically is from revenue — from tuition,” he said.

Feltner said they have already added additional faculty to several departments. And this year, using Growing Seaver money, they will be searching to fill new faculty positions in sports medicine, business and economics in addition to adding staff to the offices of Admissions, Financial Aid and International Student Services.

If there is one thing that the faculty, Dean Feltner and Provost Marrs all agree on, it is that “it is absolutely unethical to increase Seaver without making Seaver better,” Clegg said.

At the end of the expansion Benton said he also expects to see new faculty, stronger programs and a significant reinvestment of revenue, which will ultimately benefit current students, graduates and future students.

“I think that when it’s done we’ll say that wasn’t a big deal, that was a really good deal. That’s what I think,” he said.

In regards to the overall intention of the initiative, Feltner said, “It wasn’t to control out-of-control growth. It was really an intentional decision to say that there is a huge demand for a Seaver College education, in part because of the excellence and quality of the education and part because of the very distinctive Christian higher education we can deliver at Seaver College.”

Another program that is being developed as a result of the expansion is the Student Success Center, which will offer tutoring and educational services geared toward those who are already excelling in academics but want to bring a specific project or skill “to the next level,” according to Marrs.

The project will be fully funded by the expansion initiative, and a director to oversee the Student Success Center project has already been hired, said Feltner.

Given that Seaver has never advertised or marketed very aggressively, part of the expansion initiative has included a conversation about integrated marketing, according to Marrs.

When asked about the idea of developing an advertising strategy for Seaver in the hopes of drawing in more applicants, Clegg said she wasn’t opposed to the idea, but it would have to be done skillfully and strategically.

Benton was hesitant about the need to advertise for Seaver at all. He said he thinks programs like Waves of Innovation, winning national championships in sports and achievements like Steve Davis winning the Robert Foster Cherry Award for Great Teaching are what bring the best kind of attention to the university.

“That’s the kind of advertising that I like,” he said.