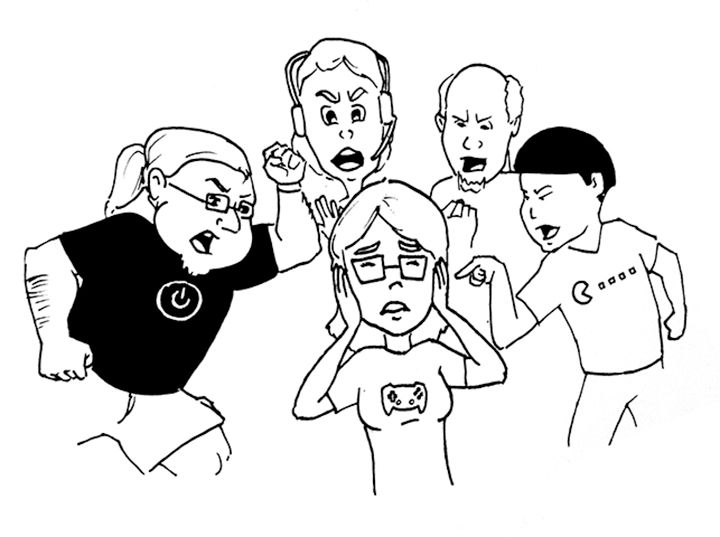 Gamergate is a movement that was supposedly against the increasing gender complexity forming in the gaming medium. I previously, in an article I wrote last semester, called those who followed it misogynists who were resistant to the idea of games being more than just entertainment.

However, since then, most news sources, even those dedicated to video games like the blog Kotaku, have dropped the subject. Since that time, I have been able to re-evaluate the subject matter.

What I found was not simply a loose organization of anti-progressive misogynists but rather a group that suspects corruption in the gaming press.

It just so happened that those who were spewing out threats and misogynistic comments were those who gained most of the media attention. Consequently, these articles were the ones I was exposed to first.

The first article on Gamergate I read was in the Los Angeles Times, “Online harassment remains major problem, report finds” by Michael Muskal, published Oct. 23, 2014. Gamergate was simply one of the many examples used to demonstrate the problem of harassment online.

As it turned out, though, Gamergate was trying to be far more than an excuse to attack women in the video game industry. Gamergate’s stint in the news shows how a few negative members can almost destroy the reputation of a movement that may even have some reasonable ideas behind it.

Though I still have misgivings regarding how Gamergate has been handling female gamers, I have learned that Gamergate’s infamy is a result of those who abuse its lack of organization.

The most notable aspect of the movement is its stance against the supposed corruption in video game journalism. Though the members can be hyperbolic in their accusations, discussions of possible corruption in gaming journalism are nothing new either.

Three years ago, respected YouTube gaming personality John “TotalBiscuit” Bain, who has views in the millions, criticized the corruption of gaming journalism in his Oct. 26, 2012 Mailbox video.

In the video, he discussed Eurogamer magazine writer Rob Florence, who lost his job after outing several journalists who were bribed by publishers to spread publicity for their games.

Today, there is a debate over whether or not gaming media as a whole is corrupt. Videos and print media seem to be mixed on whether or not there is some grand conspiracy in the realm of gaming journalism.

On one hand, there are many small videos that support Gamergate’s stance against corruption. In an interview on Oct. 23, 2014, Bain even admitted that he was offered “free stuff” in exchange for creating publicity for certain games.

On the other hand, there are other people who state that there is no conspiracy in gaming media. On Aug. 28, 2014, Paul Tassi, a contributing writer to Forbes magazine, wrote the article “The Truth About Video Game Journalism.” He wrote that while gaming press is flawed, it is not a corrupt cesspool.

It is possible that Gamergate is guilty of being closed-minded when it comes to the state of gaming journalism. However, we don’t know for sure.

I no longer completely oppose Gamergate, regardless of how inflammatory some of its members get. The problem is that the opposing side has proved to be just as unreasonable.

Anyone who has partnered with Gamergate for any project has earned the ire of the opposition, regardless of the reasoning behind it. Probably one of the most talked-about instances is Gamergate’s partnership with The Fine Young Capitalists (TFYC), self-described “radical feminists,” organizing a crowd-funding contest to get more women involved in the video game industry. Though the production of the contest is still in progress, TFYC came under fire by those opposing Gamergate in spite of their goals.

Incidents such as what occurred with TFYC show just how equally reactionary and irrational the opposition is.

Ultimately, I am neither opposed to nor supportive of either side of the conflict. I admit I made a rash judgment when I first wrote about Gamergate, seeing it only from a black and white perspective. The movement is not completely redeemed in my eyes, but it is far from a common enemy.