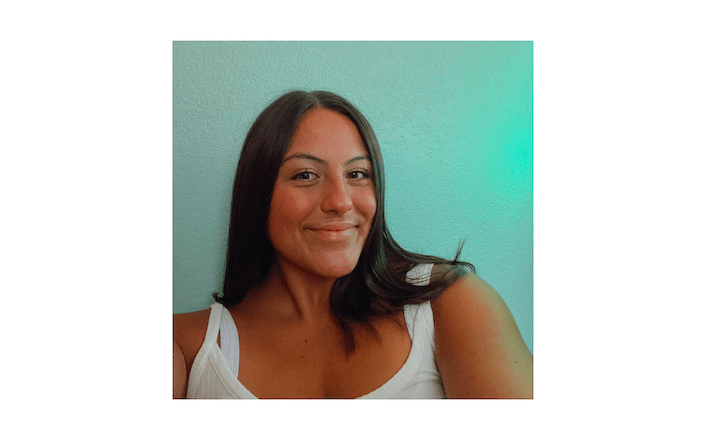 People lover Alejandra Hurtado beams with joy during a photoshoot at her house in Lake Elsinore, California. After completing her first year of college at Point Loma Nazarene University (PLNU), she decided to transfer to Pepperdine.

Sophomore transfer student Alejandra Hurtado said she found comfort in watching TV shows and movies when she was young. Once she was older, she realized those forms of entertainment helped her, and she wanted to give people the same opportunity.

“I’ve always loved helping other people,” Hurtado said. “I want to go out there and just be as helpful to as many people as I can, and I feel like I found that in the media industry with entertainment.”

Even though she loves many movies and TV shows, Hurtado said some of her favorite movies are “Clueless” and “Little Women.”

Hurtado, who is from south of Los Angeles in Lake Elsinore, California, said she began scheduling weekly time for relaxing and watching TV shows and movies in high school. Designating this time further emphasized how important forms of entertainment were to her.

“I feel like films and TV shows are such a great escape for people,” Hurtado said. “You can just enter a whole other world.”

Before transferring to Pepperdine, Hurtado said she was a Media Communication major at Point Loma Nazarene University (PLNU), where she had the opportunity to direct a live talk show. Hurtado enrolled at Pepperdine as a Screen Arts major.

“I kind of just saw my future a little bit,” Hurtado said. “I had a little glimpse of it, and I realized that this is what I really want to do with my life.”

With that experience, Hurtado said she decided she wanted to spread kindness while being in a director or producer position.

“I saw [that] the approach of offering my help and allowing them to know that I was there for them allowed the process of filming and everything to go way smoother,” Hurtado said.

Even though Pepperdine had been her dream school since she was very young, Hurtado said it took her a couple of weeks to make a decision once her transfer application was accepted. She ended up choosing Pepperdine because she was drawn to the mission statement, the location and the strong Screen Arts program.

“It was just an opportunity I didn’t want to pass up,” Hurtado said.

While at Pepperdine, Hurtado said she wants to forge bonds with her professors and use them as resources, which is another reason she decided to transfer.

“I really just want to make connections with professors and then ask them questions about my future,” Hurtado said.

Hurtado said she also hopes to intern for ABC or another news network because she knows the media industry is considered intense.

“I’d like to see it for myself just because I know you can hear a lot from other people, but I feel like unless you experience it yourself, you can’t make your own judgments on anything,” Hurtado said.

Hurtado said she is interested in studying abroad with Pepperdine’s International Program and traveling throughout the United States, if possible.

Although Hurtado said she was excited to move to Malibu to start her first semester at Pepperdine, she understands why Pepperdine made the decision to go online.

Hurtado said she thinks everything happens for a reason, and once she is on campus, she will make the most out of her time there.

After graduating from Pepperdine, Hurtado said she hopes to work as a director or producer for ABC, a sports broadcaster for ESPN or a media producer for New York Fashion Week. In any of these positions, she would bring entertainment and happiness to viewers.

“As I’ve gotten older, I realize how important it is in the world just to be helpful toward others,” Hurtado said. “I felt like I found a place to be helpful and to just give others a place to escape in the media industry, and that’s really what I want to do.”