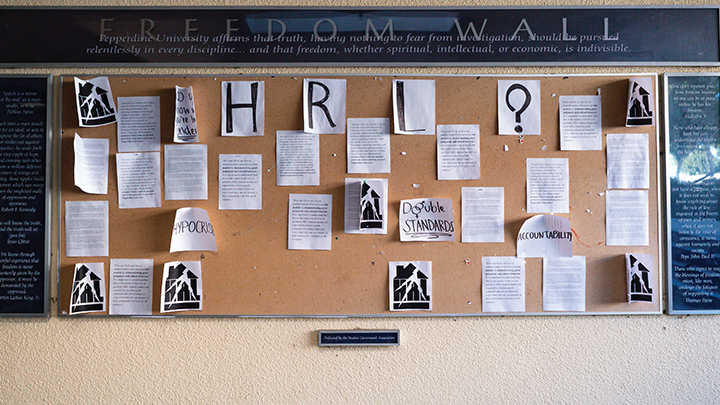 Disgruntled Housing and Residence Life student leaders voiced concerns over HRL hiring decisions for the 2019-2020 school year. From Monday, March 11 to Saturday, March 17, papers hung on the Freedom Wall quoting the RA/SLA standard contract, including an anonymous letter written to HRL about their decision to rehire student leaders who “knowingly participated in deceit and unsavory actions.”

HRL released hiring decisions for the upcoming academic year Feb. 15, angering several students who created the display on the Freedom Wall to highlight “hypocrisy” and “double standards” in the ethical behavior of RAs and SLAs. The individual(s) in question are not named, and it is unclear if they have either been offered or accepted student leadership positions for the coming year. 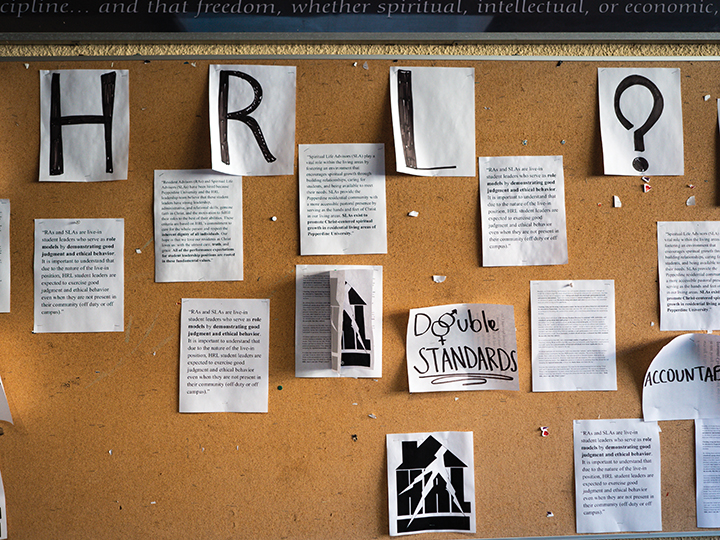 According to the flyers, “Although we [anonymous authors] would like to believe that HRL made airtight decisions through the entire process, unfortunately, there has been an obvious case of negligence upon rehiring individuals who knowingly participated in deceit and unsavory interactions.”

Maura Page, director of HRL, did not speak about the Freedom Wall or the individual(s) being called into question but said the general rehiring process is different than the process for new applicants. Returning student leaders submit an application, a cover letter and a resume. They are also evaluated mid-year by their resident director and go through an interview with professional staff members. New applicants are required to complete an application, provide two letters of recommendation and go through two rounds of interviews.

Freshman Tirzah Girardan, future Crocker SLA, said she also had to create and share a short devotional as part of her interview process.

Returning student leaders are not given priority over new applicants, Page said.

“If anything, it’s a higher standard for returning RAs and SLAs,” Page said. “To return to a leadership position, they become more of a role model.”

Page said, in the hiring process, HRL is looking for students with good judgment and ethical behavior.

“RAs and SLAs should be role models,” Page said. “We also look for student leaders that are going to exemplify servant leadership attributes such as loving others, empowering others, caring for others, [and] altruistic [behavior], those sorts of things.”

The main issue raised by the Freedom Wall seemed to be the rehiring of HRL student leadership who participate in what the author(s) consider immoral behavior.

“Cheating, lying and throwing team members under the bus are not ethical behaviors and should not be tolerated by Pepperdine,” according to the flyers. “There have been many previous HRL staff members who were fired or put on probation for breaching this section of the contract, yet it is not being upheld through this recent hiring decision.”

Girardan said, in general, she thought it fair that RAs and SLAs are held to higher standards but that students should not expect HRL student leaders never to make mistakes.

“Even as Christians, people mess up and make mistakes and do stuff that they might now regret,” Girardan said. “I think being a role model is more showing not only how to handle situations like that but also how to move forward in a really healthy way that focuses on Christ, especially at Pepperdine.”

One of the organizers of the display, who remained anonymous, said they were motivated to create the display after failed attempts to raise their concerns with resident directors about the behaviors of a specific individual.

“We decided that we were going to post something because we weren’t being heard, despite the multiple conversations we had with several different RDs about the topic,” the anonymous source said. “The topic was pushed under the rug and … we were completely ignored, or we were talked to like children, which was a big deal to us because we were told at the beginning of the year that we could come to our RDs with anything. And the one problem we bring to our RDs, it is completely ignored.”

Page said the typical disciplinary process for RAs and SLAs can go one of two routes. If the offense is a breach of policy (like alcohol possession or theft), HRL refers to Community Standards for review. However, if the offense is “sent back” to HRL or not on the level of Community Standards, it is reviewed by the professional Residence Life team.

“Within Residence Life, [consequences are] typically probation or loss of leadership position,” Page said. “There may be other [consequences]. A lower threshold is something that is not as clear-cut as policy violation but maybe a questionable judgement that someone has made or a piece of development where we would then have them work with a mentor or work with a staff member more closely. We would give them some support in responding to whatever the questionable decision was.”

Page said all cases handled by HRL are kept private from other students.

“Students who go through a process of any kind, whether it’s Community Standards or with their supervisor, that information is not public,” Page said. “And so when students perceive that there is hypocrisy or double standards, they may or may not know what outcomes have occurred with other student leaders or students.”

Senior Josie Utz, RA of DeBell Hall, said in her experience, HRL has been flexible and reasonable with how they’ve handled Community Standards concerns with residents.

“Individual cases are solved somehow,” Utz said. “It’s not as public typically, because we try to keep everything confidential for a resident. So a lot of people don’t hear about what actually happens with things; they’ll only hear the bad things that happen afterwards.”

Page said she would invite the students who put the display up on the Freedom Wall to speak with their resident director or one of the associate directors of Residence Life.

“Our goal is to care well for students and it’s difficult to care well for whoever is posting this because we don’t know who they are or what their concern is,” Page said. “Clearly somebody has experienced a negative interaction of some kind and we would like to support that student as well.”

As an incoming member of HRL, Girardan, who is unfamiliar with the particular case and SLA in question, said the display on the Freedom Wall did not change her opinion of HRL.

“I’m not really that bothered by it,” Griradan said. “I think it’s just someone who’s hiding behind not having to put a name on something and they can say whatever they want because it’s anonymous.”

The organizers of the Freedom Wall said students should ask questions of their RDs and continue the conversation.

“I would definitely say that the Wall is a call to the community to not just take things lying down,” the anonymous source said. “We’re allowed to ask questions. Whether or not that dialogue is well received, I think that’s important that it’s attempted.” 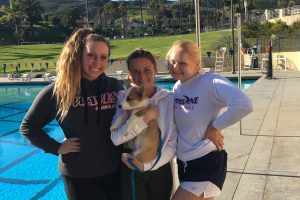 Photos by Judith BristerPepperdine Women’s Swim and Dive team took second at this year’s conference after a season...
Copyright 2013 Jupiter Premium Magazine Theme
Back to top