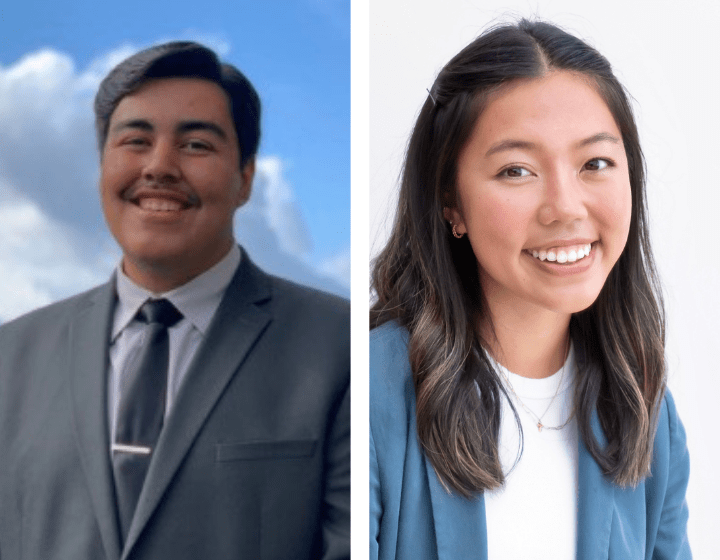 Jerry Calderon (left) and Katelin Goño (right) prepare to carry out projects that promote diversity on-campus. Pepperdine awarded the two seniors the Fellowship for Equity and Social Justice in April 2021, and they work with faculty mentors to cultivate a deeper sense of inclusion and belonging at Pepperdine. Photos courtesy of Jerry Calderon and Katelin Goño

On April 30, Pepperdine awarded two students with the Fellowship for Equity and Social Justice for the 2021-22 academic year.

Fellowship recipients Katelin Goño and Jerry Calderon — both in their senior year — oversee projects that strengthen inclusion and belonging on campus. Goño will hold focus groups where identity-based student organizations will share their experiences with one another and administration, and Calderon campaigns to expand Native recognition on campus.

After months of writing proposals with their faculty mentors, Goño and Calderon said they are ready to make foundational and enduring changes within the Pepperdine community.

“Diversity, equity and inclusion has always meant feeling safe to bring your whole self to that space,” Goño said. “Whether that’s race, religion, sexual orientation or gender, it’s choosing empathy and compassion to allowing others to not have to hide those parts.”

Goño is an International Studies major with a double minor in Nonprofit Management and English. Because she will graduate this year, Goño wants to take advantage of the time she has left at Pepperdine through the fellowship program, she said.

“I left as a freshman, and then I came back as a senior,” Goño said. “So I felt I barely had any time on campus, and I was really looking for any way to get involved that would have a lasting impact.”

For her project, Goño said she will create focus groups for students to share their perspectives on diversity and how their identities can be better recognized at Pepperdine.

“The goal is to compare what administration thinks diversity is versus what the actual student experience is,” Goño said.

With this information, Goño said she will organize discussions during the second semester with students who have differing views to try to help them find a deeper understanding of one another — especially coming out of isolation.

“Pepperdine is not the same school that we left it as,” Goño said. “I didn’t want to return to school pretending like nothing happened. I wanted to engage in some sort of initiative that was actively working toward changing the culture and providing students with more inclusive spaces.”

Goño said after social justice movements became more visible in 2020, she became more passionate about the importance of diversity and equity in her own life as well as within the Pepperdine community.

“I learned I personally have so much I need to learn when it comes to unpacking my own unconscious or subconscious biases and understanding the privilege I’ve had growing up,” Goño said. “It can be very intimidating going into that topic.”

As she has become older, Goño said she has come to realize no two people — even with similar backgrounds — have the same stories, and her project ties into spreading awareness of that idea.

“Their [her parents’] identities as immigrants definitely shaped my perception and understanding of what it means to be an American,” Goño said. “It wasn’t until more recently I realized that understanding is different from a lot of other peoples’ and that everyone has their own background that shapes that identity.”

After seeing division among student groups and administrators, Goño said she hopes everyone can better listen to one another to learn how they can foster a more inclusive community. For instance, the University can take steps to welcome those who identify as LGBTQ+ in addition to initiating more concrete action-based stances on social justice issues and in response to on-campus controversies.

Goño said her five years of volunteer work at Hope Worldwide served as a window into the lives of those less fortunate, whose minority status silences their voice in society.

“Something that sparked me to understand social justice and equity more is my involvement with nonprofit organizations,” Goño said. “We should be utilizing the resources and privilege that we have here at Pepperdine for the benefit of other people who are disenfranchised by these broken systems.”

Calderon is a Psychology and Political Science double major with a minor in English, and he said he has been involved in advocating for the Native American community on campus, especially through his position as senior class senator in SGA.

Growing up in an Indigenous and Latinx home, Calderon said his passion for drawing attention to Indigenous voices always existed but intensified as a first-year student when he learned the University occupies Chumash — his ancestors’ — land.

Calderon said his family taught him about his ancestors, and this made him want to take on a leadership role in Indigenous change-making.

“I’ve immersed myself in doing a lot of Indigenous activism by learning about great great uncles who had positions on tribal councils,” Calderon said. “They were fighting for things like the water to be on a reservation, and hearing that now — it’s inspired me to bring that here. Obviously we’re not fighting for water, but we’re fighting for their perspective to be understood and recognized.”

The title of Calderon’s project is “Tisik,” which is a Chumash term meaning “to recognize.”

“I am using that term strategically because I want not only students to recognize the land we are occupying but the administration to recognize it in everything that we do,” Calderon said.

The mission of the project, Calderon said, is split into three parts. He wants to set up a bookshelf of Native literature in Payson Library with Indigenous stories that can be implemented into courses. Calderon also hopes to promote conversations between the University and various tribal leaders about diversifying the Native community on campus in an honorable way.

Calderon said he also wants to see an increase in admission of Indigenous students from Southern California to Pepperdine.

“It’s one thing to make sure that we’re bringing in Native students, but it’s another to respect their perspective and respect that history and that culture,” Calderon said.

Calderon’s SGA position provided him with his first opportunity to take action within Pepperdine to recognize Indigenous people, he said. SGA passed two of his resolutions, Calderon said — one asking the University to release an official land acknowledgment and the other commissioning a Chumash artist to paint a mural.

When he learned about the new Fellowship for Equity and Social Justice, Calderon said he saw it as a chance to continue his activism through a larger platform at Pepperdine. He said he is grateful Seaver created the fellowship because it allows him to work closely with the dean’s office to gauge how they can implement his ideas.

Biology Professor Donna Nofziger is Goño’s faculty mentor and has been part of the fellowship process since they began drafting the proposal in spring 2021. Goño said she chose Nofziger as her mentor after researching Nofziger’s involvement in the SEED program.

“She’s such an advocate for minority groups and wants to educate herself,” Goño said. “Even when I can get caught up in all the technical aspects of doing this project — like getting past administration and working on all of the different aspects of the research — her zeal and her heart for it always motivate me.”

Nofziger said Goño’s ambition and drive is inspiring. With a student-professor partnership, Nofziger said, the project is able to reach not only students but also the administration in a way that has not been seen before.

“Katelin has worked very hard,” Nofziger said. “She’s leading from her heart and her head, and she’s done everything we would want a Pepperdine student to do — which is to find something you’re passionate about and figure out ways to do it.”

Calderon said his faculty mentor, Psychology Professor Tomas Martinez, has been his role model and support system since Calderon was a first-year.

Martinez has taught at Pepperdine for 43 years and said he has advocated for more diversity and inclusion of minority groups through his work to help high-risk youth, change the GE curriculum at Pepperdine and bring awareness to cross-cultural mental health challenges.

The University has a lot to improve upon administratively, Martinez said, and he hopes Calderon’s project will have an effect on both the students and faculty permanently.

“The impact [of Calderon’s project] will be hopefully long lasting at Pepperdine rather than simply an event that occurs,” Martinez said. “That’s part of what I would call dealing with the concept of historical, generational prejudice and racism that unintentionally or unconsciously may be represented in this history at Pepperdine.”

Ultimately, Calderon and Martinez said the fellowship has opened doors and given them hope for the future of Pepperdine — all people have to do, they said, is listen.