Campus-wide television access has changed drastically in the past few years. As more and more students choose to watch television on their laptops, differing wishes of what students should be provided arose. Within that, students called for a more evolved access to television. Housing had to experiment with different providers as the previous cable package became quickly outdated. One of these providers holds the potential to rule campus airwaves.

In early 2013, Housing and Residence Life helped launch a new on-campus television provider called Philo due to complications with extending a previous cable provider. In a 2013 Graphic article covering the startup of the program, Brian Dawson, the Associate Dean of Students at the time, along with Chief Information Officer Jonathan See, spoke on the reasons why they helped bring in the program. “Charter Cable Services couldn’t upgrade the systems we have here, asking for more channel lineup and a DVR service. We were looking to improve,” Dawson said.

Philo, according to the article, was set in place for two key reasons: 1) Charter Cable, the previous provider for on-campus housing, could not expand to greater channel packages or a DVR feature, as stated above, and 2) a student survey confirmed that residents of on-campus housing wanted to be able to access shows on-the-run and record them when busy with various extra-curricular activities, even after the school day had ended.

Philo is specifically designed to provide both, and unlike Hulu or Netflix, it covers all the student-produced programming like “The Randumb Show”, “Newswaves”, “Good Morning Malibu”, “The Meghan & Reagan Show”, and “The Sports Report”.

“What’s different about Philo compared to Hulu and Netflix is that it allows us to broadcast student-produced work online, and it also allows students and staff/faculty to stream live television,” Media Facility Manager Matthew Robinson said.

The student-produced programs often take as much as a month to work for one episode. Another good feature of Philo is that it can record those shows for later viewing, although the campus cable channel disappeared when the previous package was cut.

“Running ‘The Randumb Show’ is really fun; it’s a big part of my life,” sophomore Randumb Show producer Leah Beck said. “It’s hard sometimes because premieres are on Friday nights, so many people miss them. We only show them once. However, as far as having them more easily accessible to digitally record on an actual TV, I think that might better get our work out. The thing about other programs is they don’t offer the on-campus channel. A lot of kids don’t have personal cable TV. I feel like if people realized Philo also records the campus channel, they might use it more.”

To access Philo, students must visit pepperdine.philo.com and login with school credentials to begin the process of signing up to be one of Pepperdine’s registered users. The full channel lineup is then available for instant streaming. Channels include CBS, NBC, FOX, HGTV and KCAL. Users can then search for live programming, set a DVR recording and access their profile. It also comes with a “Make a Wish” feature that enables users to submit programming they would like to see from Philo.

Trained on the campus televisions, RAs must have an understanding of all these programs so they can tell their residents how to operate each of them.

“I pretty much only use Philo for sporting events,” Resident Advisor Henry Byoun said. “Philo provides channels like ABC, TBS and CBS, which often show important live games. I don’t use [Philo] too often though. Sometimes I will stream games on my phone through Philo during class when I don’t feel like paying attention or while I am studying in the library. I don’t use it very often, but it is very convenient to have when I want to watch a game.”

In a phone interview, Philo co-founder Tuan Ho said Philo started out in a dorm room at Harvard.

“Since we didn’t have a good on-campus TV provider, we decided to jerry-rig the TV in our dorm to get the programs we wanted on our laptops,” Ho said.

“We made it a business. After perfecting the system, our very own school, Harvard, became our first customer. Through that, this program broadcasted the death of Osama Bin Ladin to more than one-fourth of Harvard students: a very historical moment. We turned Philo from a toy into a product on our very own college campus, and we want to share that with other campuses.”

Some students, despite the history of the program and its collegiate roots, still find its usefulness very limited.

“For my apartment, Philo was helpful to watch live TV, but we only had to use Philo because of the effort it took to get our [broken] TV fixed,” said junior Amy Kahng. “For everyone else, I can only see it being useful for the recording feature, but shows not offered on Hulu can still be found online elsewhere. Plus, I don’t feel like most students watch enough currently airing TV for Philo to be really useful.”

In any case, it could be that students just don’t understand it as well as the familiar names of Netflix and Hulu, which provides television that the student wishes to view, or that viewership of television in general at Pepperdine isn’t very strong to begin with, what with the beach right outside. It is clear in any case that Philo could be doing more. 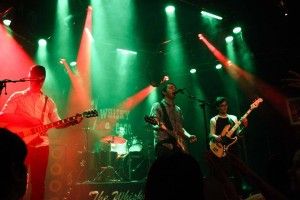 Photo courtesy of Timsh'l/FacebookIf U2's guitar parts, Pink Floyd's bass lines and The Killers' lyrics were to have a musical...
Copyright 2013 Jupiter Premium Magazine Theme
Back to top