After the Dean of Pepperdine’s School of Public Policy Pete Peterson sent out a controversial email to a list of conservative news subscribers, the community responded, both in criticism and defense of the email’s statements.

In this episode, we talk to news editor Ashley Mowreader, who published an article detailing the email and its controversy Oct. 15.

We also hear from several Pepperdine students (current and alum) on their response to the email and its contents, including a call to remove the NY Times’ 1619 Project from school curriculum, the shock of the email being sent without prior university approval, and the email’s sentiments about another issue within American academia: viewpoint diversity.

“The Graph” is hosted and produced by Lindsey Sullivan and Ivy Moore. This episode was recorded remotely and edited by Lindsey Sullivan. Featured music: “What Was That” by Spectacular Sound Productions, “Adventure” by Chad Crouch, “Chalet” by Meydän, “Running Waters” by Jason Shaw, “Dakota” by Unheard Music Concepts, and “Action” by Monsplaisir. “The Graph” is a Pepperdine Graphic Media production. 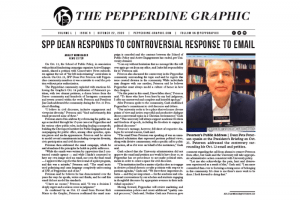