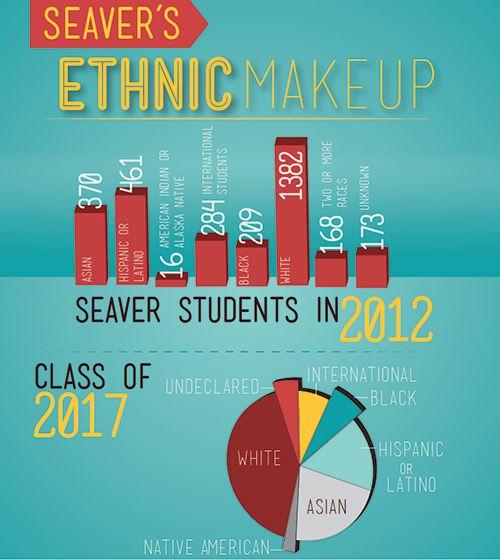 Diversity. It’s a common word with heavy implications. In recent years diversity has been a prominent area of interest for the administration, especially considering Pepperdine has been a predominantly white institution since its founding in 1937, according to Director of Admission Laura Kalinkewicz.

In his strategic plan for the university “Boundless Horizons,” President Andrew K. Benton declared in 2010 that an increase in diversity was one of his goals. This year, Seaver has reached 50 percent ethnic diversity for the first time ever.

This means that traditionally underrepresented ethnic groups, including Hispanics, African Americans and Asians, now comprise half of the student population.

Four or five years ago, the percentage of minorities made up approximately 25 percent of the student population. “We probably thought in terms of doubling that,” Marrs said. “So we’re close. We don’t have a specific target or anything, but we’ll be trying to make sure that classes we bring in are diverse.”

There are several motivations in making Pepperdine more ethnically diverse, Kalinkewicz said, including accurate representation of national averages and the population of Southern California, a fulfillment of the Christian mission and the opportunity to engage in and understand other cultures.

In terms of geography, Kalinkewicz said that Seaver’s top feeder states were different this year since Arizona tied with Illinois and New Jersey tied with Oregon.

“The other thing that we’ll try to pay attention to is our gender balance,” Kalinkewicz said. “We need to make sure that we’re still an attractive institution for male applicants since we’ve become a little female heavy, though it’s nothing unusual nationally.”

She said the Office of Admissions is seeing the national and California trends reflected in the applicant pool as the populations of American students who are going to college are students of color, first-generation students, diverse learners, adult learners and veterans. Diversity is also central to the mission of Pepperdine as a Christian university, according to Kalinkewicz.

“Diversity is a really beautiful thing because as a Christian university I really think that we should mirror what the kingdom looks like,” she said. “It’s very clear that diversity is celebrated in the gospels, so that’s something we’re proud of. To me, diversity is all about people bringing their individual stories to bear upon the identity of this institution.”

Another important aspect of diversity is the advantage it gives all students, regardless of ethnicity, Kalinkewicz said. “I think it serves all our students better when they are surrounded by peers who come from different backgrounds and have different experiences, and I think that’s at the heart of a liberal arts education and critical thinking being able to see a different perspective.” She said diversity is vital to the educational experience, “especially when it comes to learning how to interact with people who are going to be in the work place, in the world and who share in that faith tradition.”

Kalinkewicz said Pepperdine does not follow a quota system since quotas are illegal but that the Office of Admission focuses more on the recruitment process as opposed to the acceptance process to increase diversity.

The Office of Admissions started actively incorporating diversity into recruitment strategies about four years ago, according to Kalinkewicz.

“We visit high schools where we know we’re going to attract students of color and first generation college students,” she said. “We try to attract a really diverse geographic range, we do quite a bit of international recruitment and we partner with a lot of community-based organizations.”

Programs such as Posse and organizations such as the Center for Student Opportunity have played a vital role in the recruitment of a more diverse student group, Kalinkewicz said.

Another initiative is articulation agreements, Marrs said, which pertain to transfer students. “We took the Ventura community colleges and Pierce College, and we sat down with a number of representatives from there and told them that if they have diverse students that are outstanding academically, we will guarantee them transfer to Pepperdine. So we’re trying to be much more proactive and intentional about that.”

Marrs said another initiative is to increase the amount of diversity among faculty and staff so that they reflect the student population. He said there are difficulties with this, though.

“We’re trying to hire the same kind of faculty as big schools,” he said. “It’s a challenge, but we’re making progress. We’re probably pretty close to the ultimate goal, but we never had a percentage target.”

As for other areas of diversity such as faith or socioeconomic background, Marrs said Pepperdine is fairly diverse already.

“Diversity means so much more than the percentage of students of color that we have in our class,” Kalinkewicz said. She said she sees no stalling in continuing the diversification process of the Seaver population.