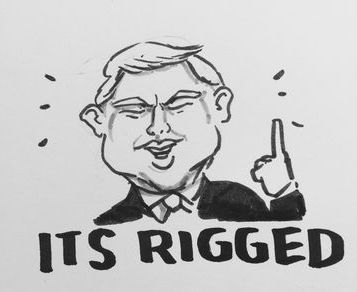 During the third and last presidential debate, presidential candidate Donald Trump told the moderator that once the votes had been tallied, on the night of Nov 8, that

“[He] will look at it at the time…[that he would] keep you in suspense.”

On a completely unrelated note, when the founders of our nations established the country, they decided that it would be a representative democracy. This means that after a vote by the citizens, a representative is elected and chosen as their leader –– bloodless as possible. In fact, this is a general point of pride for the United States, as Chris Wallace said during the debate, “There is a tradition in this country, in fact, one of the prides of this country is the peaceful transition of power, and no matter how hard fought a campaign is that at the end of the campaign, that the loser concedes to the winner.” But moving on.

Trump later stated that he meant he would only contest the vote if he thought it to be rigged and due to cases of mass voter fraud, which is a theme he’s kept up for several weeks now in both rallies and Twitter rants.

If there were as much voter fraud as he claimed, his statements would be valid. The problem is, those allegations are simply not true.

Although claims of voter fraud have always been popular, one study by Lorraine C. Minnite called “The Misleading Myth of Voter Fraud in American Elections” on Jan 14 from Scholars Strategy Network showed that the worries of widespread voter fraud caused by individuals voting multiple times under different names are entirely unfounded. Under President George W. Bush, the U.S. Justice Department launched a campaign to discover voter fraud and found that “out of 197,056,035 votes cast in the two federal elections held during that period, the rate of voter fraud was a miniscule 0.00000132 percent.”

Unless Democratic nominee Hillary Clinton somehow pulls a move akin to what the Warriors pulled in last season’s finals, or if there’s a secret October surprise nobody expected, Trump won’t win in the election, according to the ABC News Tracking Poll. He will lose, and this time next month we’ll have the second Clinton presidency. Whether he willingly concedes or not is up for debate, but if Mike Pence or Ivanka Trump have anything to say about it, he’ll have to concede.

However, the seeds he has sown will last far beyond November. This distrust of the democratic electoral system is something we will see the effects of in the days, weeks and years to come. Even after the vote on Nov. 8, America won’t be done with this election.

With his statements, Trump has sown seeds of doubt into the basic tenets and fairness of the U.S.’s democratic election system, with his rallies filled with angry supporters convinced that the election is rigged, and even openly speaking of assassinations if Clinton wins. To a lesser extent, there’s this all around. It seems to be that no matter who wins Nov. 8, there will be a large proportion of the population that will be angry and will want to resist supporting the president.

More so than any other election in memory, the winner of this one will face nationwide opposition. There are Trump supporters who claim if Clinton wins then there will be some sort of violence, and there are Clinton and non-Clinton supporters who say that if Trump wins, then they will move to Canada. [Given, that argument has been used often enough in other elections as well.]

Representative democracies such as the U.S. rely on losers conceding to and accepting their defeat without calling foul play when there isn’t evidence of such. That’s what keeps it from becoming a dictatorship. How a candidate feels about the results isn’t as important as the results themselves. As Dick Tuck said in his concession speech after losing the race to a California Senate seat, “The people have spoken –– the bastards.”

Don't Lose Hope for the Future 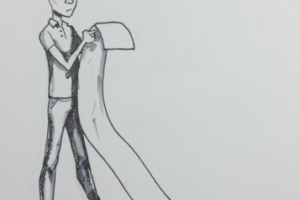 Art by Peau Porotesano The presidential election has escalated to a point of insanity. Statements and revelations that...
Copyright 2013 Jupiter Premium Magazine Theme
Back to top