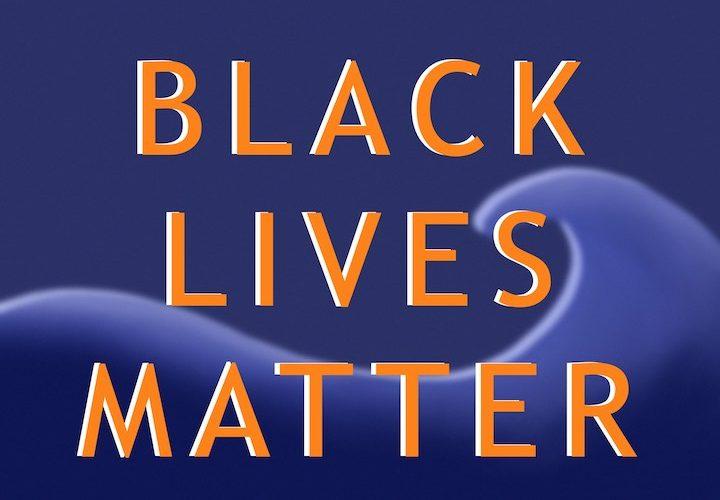 Racial injustice is at the forefront of many people’s minds this week in light of yet another Black life lost at the hands of police brutality.

On May 25, a white police officer brutally murdered George Floyd as other officers watched and civilians recorded. This event inspired days of protests in the Los Angeles area and around the world.

Some students took to Twitter to condemn Pepperdine for its silence on the issue. 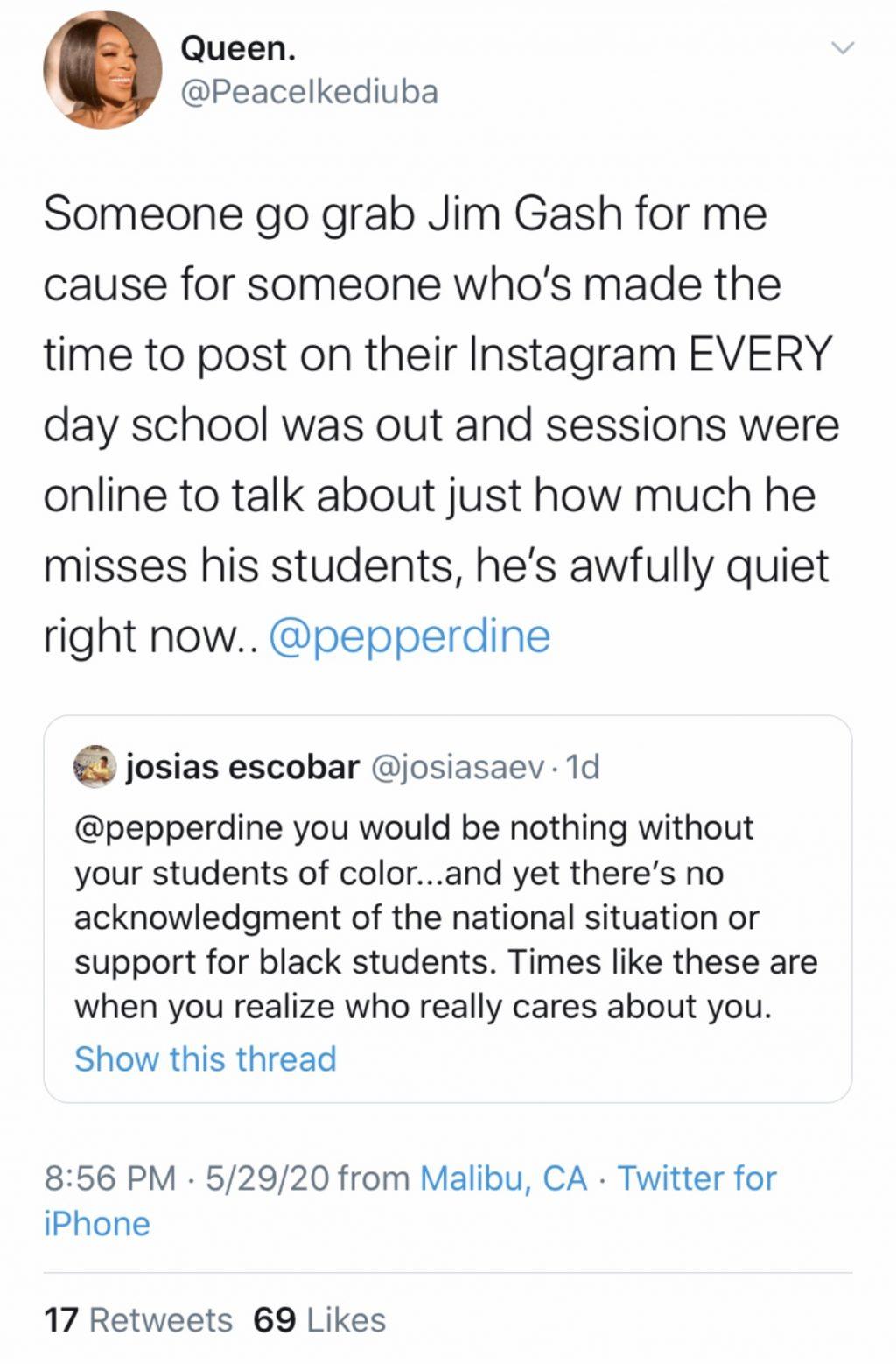 Screenshot of one of the many tweets posted May 29 on Twitter urging Pepperdine and President Jim Gash to speak out about the murder of George Floyd. 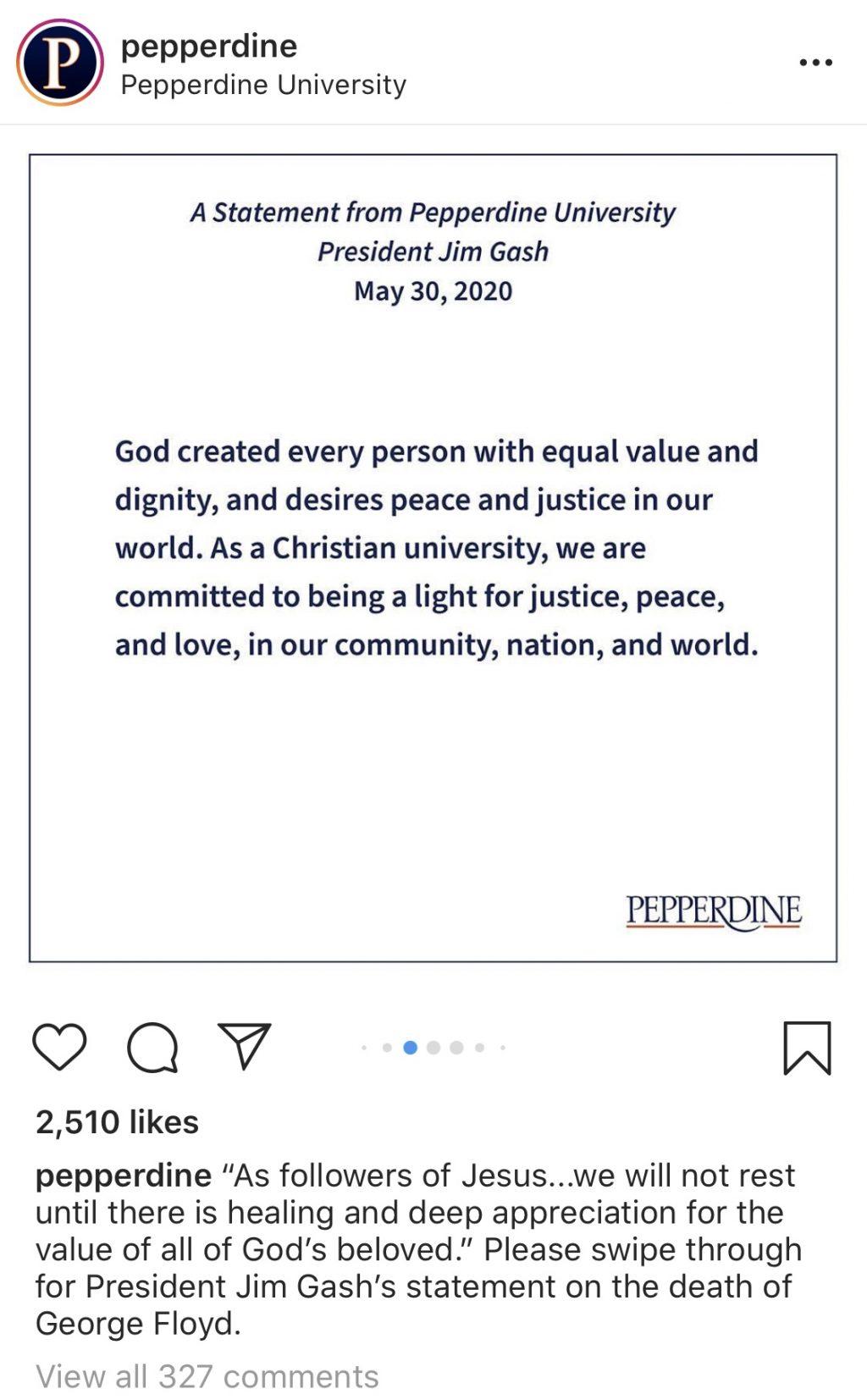 In fewer than 24 hours, the Instagram post received over 300 comments. The majority of these comments were from students and alumni voicing their dissatisfaction with the University’s handling of the situation. Some wrote that the post neglected to relay the message that Black lives matter and instead uplifted the problematic rhetoric of the #AllLivesMatter campaign. Since the post failed to mention the word “Black” at all, these concerns are valid. 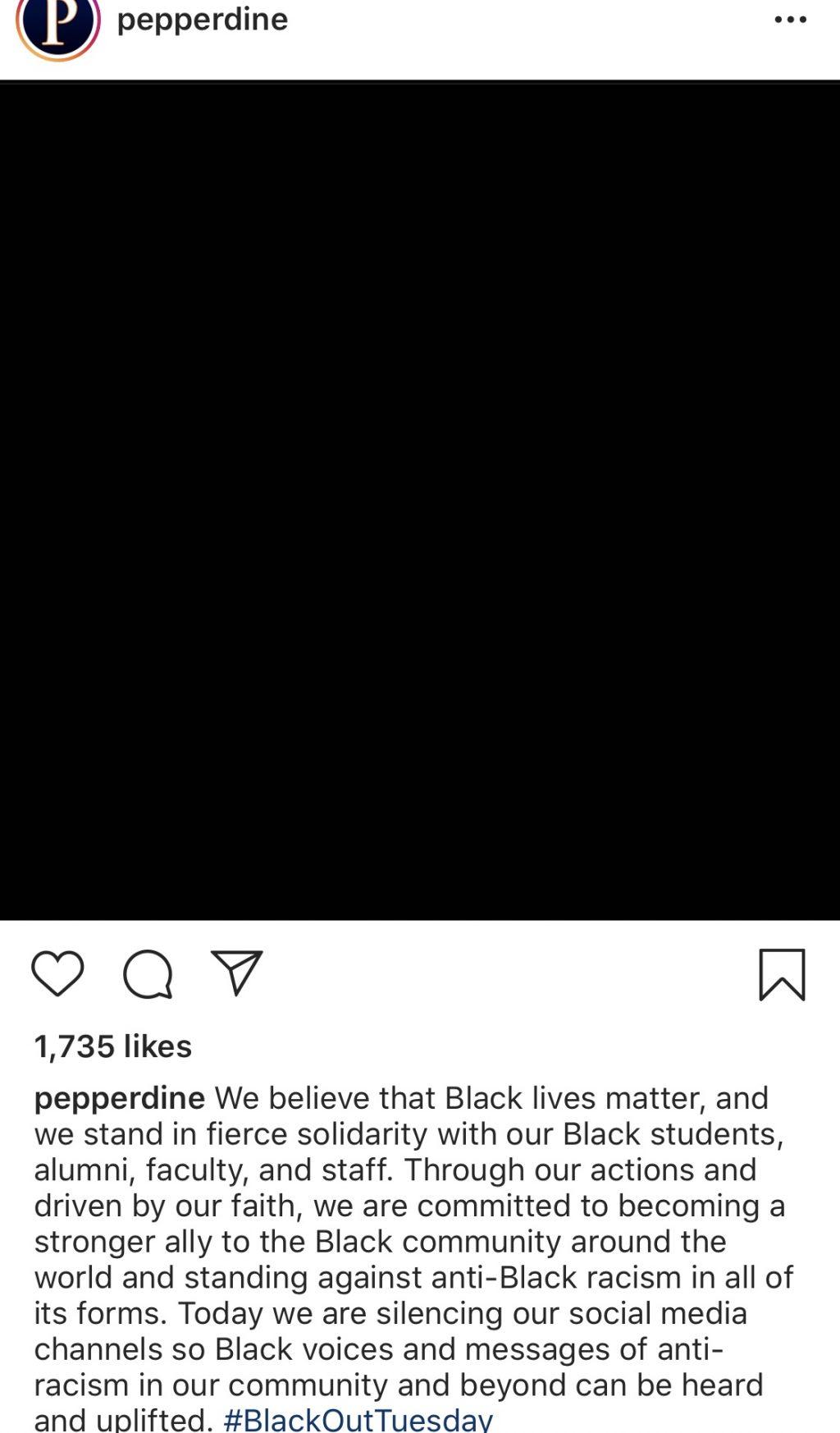 I urge you to hear the cries from Black members of the Pepperdine community.

They are not OK. They want change. They deserve it.

Hear their pain and anger as they draw attention to Pepperdine’s history of discrimination and lack of diverse faculty. Read their own personal encounters with racism on campus. Listen to their demands for action.

The Graphic has covered events related to racism at Pepperdine in the past:

“As an alumnus I would like to know how Pepperdine will act on these statements TANGIBLY and not just in sentiment. Will you create and hold space for faculty and students to listen and learn from current Black students and Black alumni? Will you hold prayer vigils and challenge the Pepperdine family to genuinely repent and lament? Will you start conversations about privilege and white supremacy? Will you take initiative to do all this not when it’s ‘safe’ to do so but immediately, starting right now, virtually, with all the technology at your fingertips?” @nikkihayne

“What are YOU (Jim Gash, [Deans], Faculty, Staff, etc.) going to do in order to ensure that your Black students feel supported, protected, and valued? Are there policies in place that will protect us from further racial profiling and discrimination on campus? What are you going to do for us? Pepperdine graciously proclaims that it is a place of diversity and inclusion, so in a time like this especially, I want to see this proclamation play out. I want to see Pepperdine on the front lines — not necessarily in protests, but fighting for our rights and freedoms and justice just like the rest of us. I want to see Pepperdine challenging those in the community that are being silent right now. I want to see Pepperdine spreading resources to educate those who choose to go out and protest, donation links, case updates. I want to see Pepperdine actively uplifting, supporting, and fighting alongside the efforts of its Black students and organizations. These are the kinds of statements we want to [see]. We don’t need administrative acknowledgment of what is going on. We already know what is happening. We want to see action plans. And if you can’t give that to us, then maybe we aren’t as valued as claimed. And that’s that. I will continue to ask these same questions until I am presented with an answer that I deem satisfactory for my standards and expectations. So Pepperdine, please don’t think I will sit in silence. I was born to make noise.” @queen.launnie

“Do you know how many times I had to prove I was a student to DPS? To Malibu PD [Lost Hills Sheriff’s Dept.]? How many racist comments I had to endure by my faux-intellectual peers for the sake of a grade? I appreciate your weak attempt at addressing the current state of the nation, but I know the real change starts with YOU. YOU have to create and implement anti-racism policies on campus. You need to start having the hard talks with students and faculty of color, and find out what it’s really like to be Black at Pepperdine (hint: it sucks). It’s time to denounce racism, and stop letting it be the norm, etched into the entire college experience of students, like it was for me. Enough words. It’s time to jump into action.” @kaelyngenea

“Oh honey. Try again please. As a white person, I’ve never been ‘unappreciated’ and the healing needs to come from ~us~… the ones who historically and to this day are the oppressors!!!! I would appreciate it if you would acknowledge the struggles of your black students and alumni who you are gravely letting down right now with all this ‘all lives matter’ nonsense. Call it out or it shows you only want them on campus because diversity looks good.” @kearci

“How about a reparations scholarship for Black students considering Pepp exists in Malibu because of racist violence?” @burrti0b0y

“This isn’t good enough. I’m getting flashbacks of my time at Pepperdine where I was bullied because of the color of my skin. Where I was profiled in the Pepperdine theater department and my skin color often a factor in casting decisions. Where the students on campus spewed incredibly hateful speech about black people on the infamous app YikYak. Pepperdine did nothing then and is still doing nothing. Sure, meetings were hosted to have a dialogue about the situation but they were only met with empty promises and it’s not good enough. Pepperdine is big on saying the school is like a ‘family.’ Well, love and defend and protect your family then. Pepperdine boasts of having diverse student life and leaves those very students hanging. It’s disappointing and we’re tired of empty promises of change. Hire more black faculty and other POC. Figure out how to better serve your students. And most importantly, right now, tell your BLACK student body how you will change campus culture to better serve them.” @paigeelson

“That statement will absolutely not suffice as support for justice, love, and the destruction of racism. Especially not from an institution that proclaims the name of Jesus. The same Jesus who put every ounce of his being on the line to run toward the oppressed. We will not accept your kind, misleading, pretty words without action. How will one of the wealthiest Christian institutions in the nation put their title, their money, their donor relationships, and everything else they cling so tightly to on the line for the oppressed like out Jesus. Our Jesus who put his very body, blood and being on the line. Who was unconcerned of his reputation, but was concerned about the work of His Father. Where do your concerns lie? The answer is in your action. Your students, faculty, staff and the world is watching. Take action.” @elite_16

“@jim_gash I’m so disappointed in this response. It seems like you’re trying to please everyone instead of standing up for what is right. Pathetic, do better.” @g.hef

“We know Pepperdine’s history. We know the University fled to Malibu. @jim_gash you have a duty to acknowledge how your black students have felt on campus. How the culture on campus contributes to making black students, faculty, and admin feel excluded. Acknowledge how Pepperdine DPS officer Charlie Lane on March 12, 1969 shot and killed 15 year old Larry Donnell Kimmons. This university’s hands are not clean. If my alma mater wants to continue promoting its commitment and service to others, Pepperdine can start by acknowledging that #blacklivesmatter Beyond that: what are your action plans to ensure that Pepperdine will continue to support its black community?” @caitogreat

“This statement is unacceptable and just empty words. Where in your address did you speak to the black community SPECIFICALLY! We are here and we are part of YOUR community, yet when we are once again faced with the detriments of systematic racism you can’t speak to us specifically. Also what are you going to do to fix the racism that spreads through the DPS office that is supposed to protect us? I’m disappointed. Address US directly, acknowledge OUR suffering, then act and stand with US.” @hope_horn

“My freshman year I walked out of the shower to a confederate flag being held in my face by my suite mate (who worked for DPS). As he laughed, holding this flag, I felt incredibly unsafe, violated. I told my RA and nothing was done. NOTHING. In my own home away from home I was unheard, unseen, manipulated into silence, and broken. Pepperdine please do better. There are things you don’t see, things you don’t do, and things you cover up. We shouldn’t have to beg you to say black lives matter.” @jalonmatthews

Hear these voices. Demand change with them. End Black discrimination at Pepperdine.

On June 3, Pepperdine Public Relations sent another email to students and faculty acknowledging these cries and promising change. While this message — signed by Gash — is a vast improvement from the first statement, it should not have taken this many tries to get the message right. Pepperdine’s Black community deserves better. Hold the University accountable to its new vow of action.

How can you do that? Support the Pepperdine Black Student Association (BSA) both on social media and on campus to become more educated on how to stand united with Pepperdine’s Black community. Sign this petition aimed to improve racial diversity at Pepperdine. Email Pepperdine administrators; urge them to hire more Black faculty, refine their discrimination policies and implement a Black history curriculum. Our Black community does not deserve silence any longer. 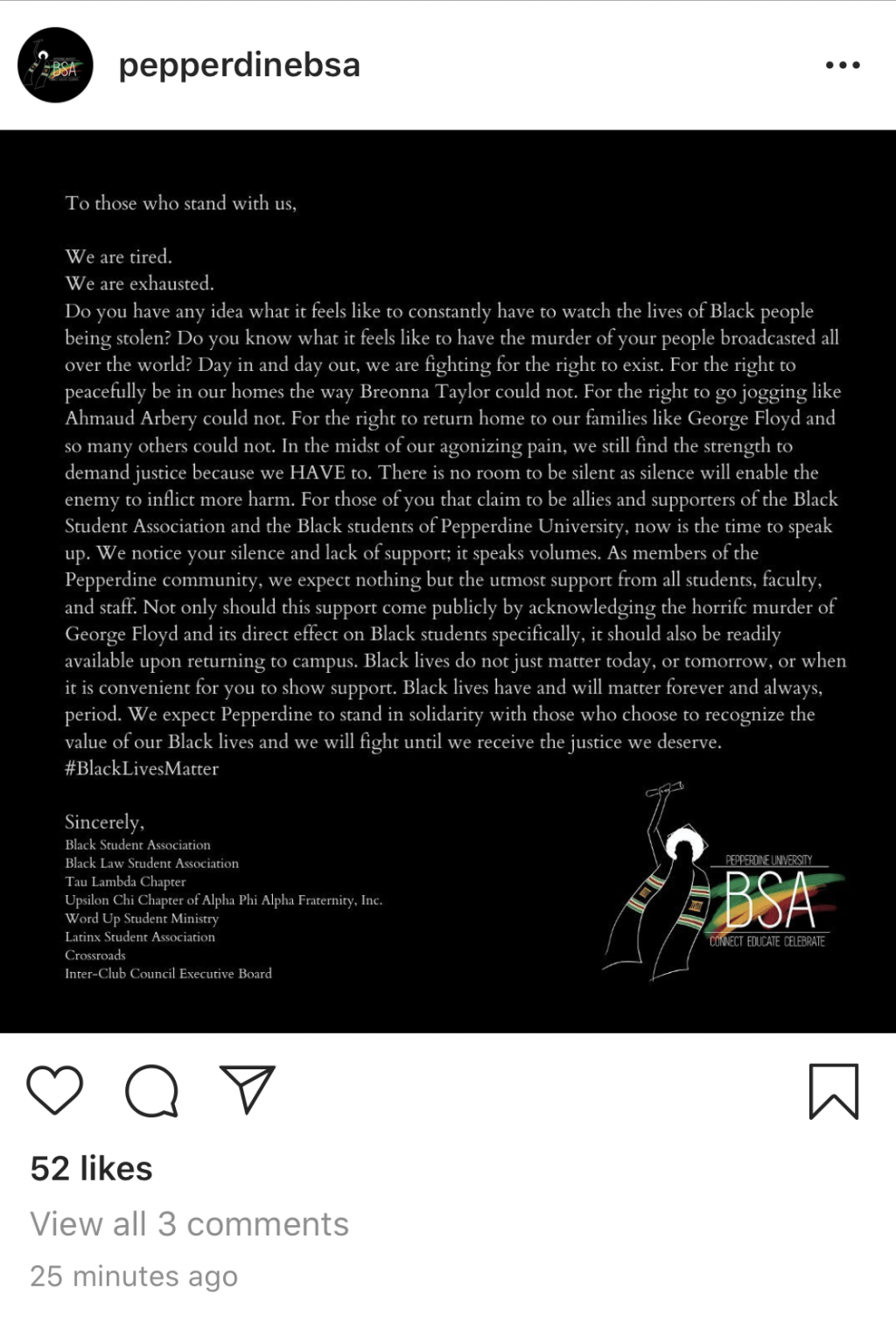 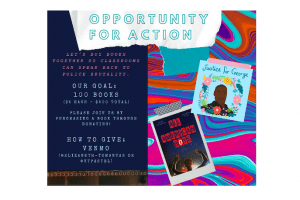 Graphic courtesy of Kara Tyler A Pepperdine professor-student duo raised more than $3,000 over the weekend to purchase...
Copyright 2013 Jupiter Premium Magazine Theme
Back to top