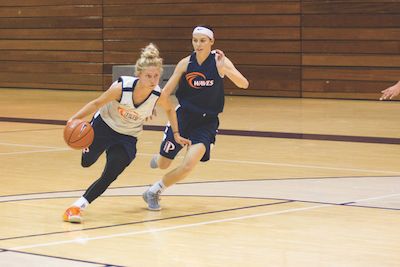 The motto is a strong representation of the youth and excitement Pepperdine Women’s Basketball team has brought entering the 2016-17 college basketball season. After finishing last season with an overall record of 7-24, going 2-16 in West Coast Conference play, Head Coach Ryan Weisenberg remains optimistic about developing a team culture while seeing continued growth and improvement

“We really focused on our culture with the start of this season,” Weisenberg said. “Yes, we’re young and that will show in some big games, but we want to create that positive atmosphere, be more communicative, be ready to learn and most importantly, be ready to be a team player.”

“We have a lot of young talent this upcoming season especially with eleven underclassmen,” Head Coach Ryan Weisenberg said. “I see us using that as an advantage to develop our skills and chemistry to help us grow as a team.”

Out of all the returning players on the roster, Yasmine Robinson-Bacote made the biggest strides over the summer to improve her game both offensively and defensively.

“It was an easy decision to put in work all summer long,” Robinson-Bacote said. “With one full season under my belt, I knew what to expect in terms of preparing for games, staying in shape and eating right so over the summer I continued to follow that pattern and just continue improving.”

With Robinson-Bacote on the rise, Head Coach Ryan Weisenberg hopes to pair her up with the senior leader of the team Allie Green to create a dynamic duo. For Green, who will be playing her fourth and final season in a Waves uniform, she took some time to reflect on how her past three years have helped her become the person and the player she is for Pepperdine.

“I have definitely developed more leadership skills and build upon my weaknesses as both a player and a person,” Green said. “Through those growing pains, they were a bit of a struggle, but they did help me become a more complete and all-around player.”

Weisenberg praised the senior guard’s efforts to put in work on her game over the offseason and how he expects her to finish her final season at Pepperdine with a bang.

“Allie’s the one everyone needs to come out, watch and be excited about,” Weisenberg said. “She’s going to be a scoring monster because she’ll be having the ball in her hands and she has definitely come back faster, stronger and healthier after a lot of offseason training.”

The Waves will play 29 regular-season games, 11 of which will be non-conference before opening up WCC play on Dec. 29 at home against Gonzaga. Pepperdine will play five non-conference home games and six on the road, with a home matchup against Duke on Nov. 27 highlighting the Waves non-conference schedule.

“Our team has already come out and circled the Nov. 27th game against Duke,” sophomore guard Paige Fecske stated. “It will be a great one, especially for the home fans to come and support us as we take on one of the best basketball programs in the country.”

Although the Waves were selected to finish tied for ninth with Portland in the West Coast Conference in the preseason rankings, the team’s goal isn’t centered around winning or losing, but much rather on developing a strong culture of growth and unity.

“We all make sure every voice is being heard in the locker room and through that, we just hope to keep each other accountable,” Green said. “That’s our main way of getting closer to each other and also get better as a collective unit.”

The 2016-17 Waves roster is stacked with young, exciting players with bright futures led by a young and qualified coach who enters his fourth season at the helm. The torch has been passed down to a new leader who has already helped shape a new dynamic in the team’s culture. Of course, the season won’t always be pretty, but it will be satisfying to watch the young women grow into the great players they are destined to become.

With all eyes on Firestone Fieldhouse (and Allie’s colorful purple hair), the new era of Pepperdine Women’s Basketball has officially begun.

UP NEXT: After falling to Antelope Valley 76-72 in an exhibition match on Oct. 29, the Waves will kick off the 2016-17 season hosting Long Beach State at Firestone Fieldhouse on Nov. 13 at 1 p.m.