Graphic videos of gunfire and chaos flooded television screens following the 18th school shooting in the first 44 days of 2018, leaving parents wondering how they can talk to their kids about tragedies such as these.

The Santa Monica Malibu School District has issued a statement of support in response to the school shooting.

The statement said, “Our hearts go out to the families and staff involved in yesterday’s tragedy at Marjory Stoneman Douglas High School in Florida. We hope and pray that nothing like that ever happens in our schools or community. However, if it does, we are prepared as much as possible. We take safety very seriously, and practice our emergency response plans frequently.”

“I think talking about things we feel, it helps them not be as scary,” Fink said.

From there, see how you’re child reacts and let them guide the conversation.

“And then your child will kind of guide you to what they need next,” Fink said. “So I would say look to them for guidance.”

One of the first questions a child might ask is why this happened, and Fink said it’s important to explain that we don’t have all the answers and that’s okay.

“If it were me, I would say that I don’t really know why, sometimes things happen that we don’t know why they happen, but what is really important to communicate as a parent is not to lose hope and trust in humanity,” Fink said.

But above all, it’s important to communicate to your kids that they are loved and reassuring them that they’re safe.

“These things in our society, I mean they’ve been happening more and more, but they’re happening because people had a hard time when they were children we’re raised in a way they thought people loved and cared about them,” Fink said.

Fink said that he would translate to his own kids that they are loved. 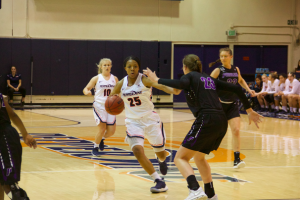 Photos by Joanna Cabalquinto Robinson-Bacote put up 31 points with 10 rebounds against Portland on Thursday, Feb. 1 for her eighth...
Copyright 2013 Jupiter Premium Magazine Theme
Back to top