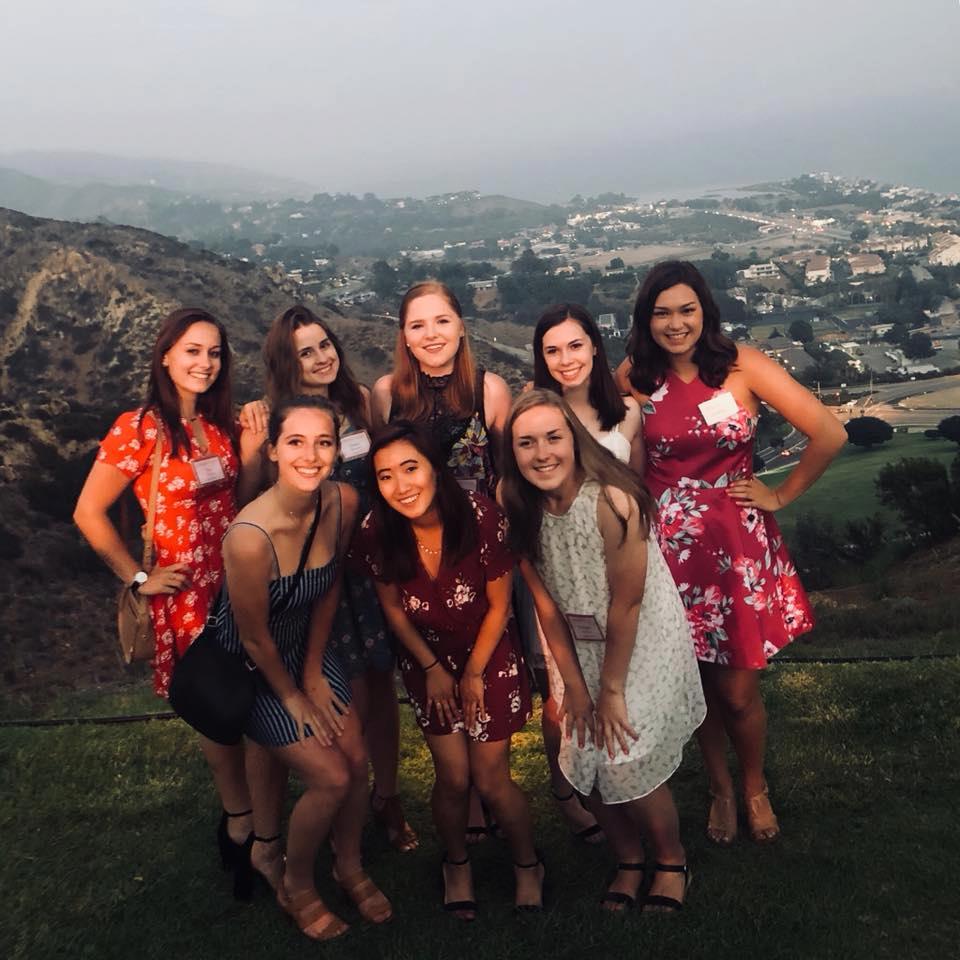 Figuring out what my life has been, is and will be like, post-mass shooting, has felt like being trapped in a Venn diagram. Borderline survivors stand in one circle, Alaina’s suitemates stand in the other circle, and I stand alone in the middle. While I have supportive, close friends in both respective circles, nobody can really understand what living between those lines is like.

I’m certain we all feel lonely and isolated because nobody experiences grief or trauma the same way, but there’s an inexplicable pain that comes with the knowledge that no one on any Pepperdine campus has seen what I’ve seen, heard what I’ve heard and felt what I’ve felt.

Grief and trauma are ugly, and no matter how much I or anybody else willed it to be beautiful, they weren’t, aren’t and never will be. Grief is crying whenever I listen to the songs Alaina sang and played on her ukulele. Grief is becoming paralyzed in my steps whenever I walk by and see an empty bed and bookshelf. Grief is feeling guilty whenever I think about how Alaina was supposed to study abroad, publish a book and attend law school, knowing I get to move forward and accomplish my goals and she will not.

Trauma is lying in bed with all the energy drained the minute I wake up, wondering how I’ll get up, let alone walk up to the CCB for class. Trauma is never being fully present because I’m always checking my surroundings to make sure it’s safe to eat at my favorite restaurant or read a book on Zuma Beach. Trauma is waking up from nightmares and flashbacks at 4 a.m., every day and begging God to make it end forever. It’s impossible to comprehend what grief and trauma is like until it hits you.

Conveying how I feel to those around me has been one of the hardest challenges since Borderline. With friends who were not personally affected by the shooting, I struggled to analyze what our relationship would be like going forward. Many people were uncomfortable with me bringing up Borderline and Alaina, which was frustrating because it was healing for me to talk about my experiences. Many others beat around the bush, even though I was perfectly OK talking about my trauma.

The lack of authenticity in our interactions made it difficult for me to feel at home in my relationships that were formerly close. This resulted in me cutting out numerous people whom I felt could not handle my baggage, and by extension, myself. It’s easy to understand why this was a common reaction from people in my life, but it upset me that I had to put my feelings aside for their comfort when I was the one who was grieving and traumatized.

It was even hard to understand the new nuances in my interactions with those who were at the epicenter of the event. Many times, we would sugarcoat our feelings to keep from burdening one another. Other times, the directness I spoke with startled and hurt people. I still struggle to judge an environment and balance how I should speak and act. It’s frustrating to have to make all these adjustments in my daily interactions that my peers who weren’t affected by Borderline never have to think about.

This challenge has only proven harder in the past two months I’ve been abroad. I didn’t personally know the majority of the people in my program, and I also struggled to gauge how many people knew who I was or what I had been through. My and my suite’s grieving were forced into the public eye as various news sources tried to capture our story. However, it’s hard to figure out who still remembers I read Psalm 23 at Alaina’s memorial service with my suitemates or co-wrote an article for the Graphic last year honoring her life.

It feels arrogant to expect people to remember, but it’s also frustrating to know they don’t have anything to lose by forgetting. I don’t know how blunt or sensitive I have to be in bringing up last November with my peers in Lausanne, and again, it’s a struggle to be alone in reading between the lines.

Sometimes I find myself subconsciously testing the waters and seeing who is able to show substantial amounts of compassion and listen to my story. Last November’s events have put up a barrier that prevents me from feeling as close to those in my program as I would like to, and I know I’ve hurt others because of it.

Even though there’s other Borderline shooting survivors in Lausanne with me, I feel distant and removed from them because I spent the majority of the year grieving for Alaina with my suitemates, and it feels like everyone else who was at Borderline was able to get a head start in healing from their trauma. It’s a challenge to connect because I do not want to rouse up any negative reactions they were avoiding feeling, and I don’t know how many others feel the same way.

The most helpful thing people have done for me is simply to have empathy and understand that they can’t comprehend what I’ve experienced. Over the past year, I’ve interacted with countless people both in person and on the internet who’ve grasped for connections to Borderline and Alaina but failed to find one. Regardless of if they attended Borderline or intended to, knew anyone who did or knew Alaina well, there were many people who pretended they understood the depth of what I felt.

I’ve learned that we do not need to be at the focal point of a tragedy to have an excuse to be sad. As humans, we are saddened by tragedies because they should not have to happen to anybody, and it breaks our hearts to see the pain caused.

However, when we try to explain our sadness through a nonexistent grief, all we do is lie to ourselves and hurt those whose grief is real. We tell those who have lost someone dear to them that they are not feeling emotions unique to their experience.

The people who are able to admit they can’t fathom the hurt I feel but try to empathize and listen to my story are those who have made me feel the most comfortable and seen. The best thing you can do to help someone through their trauma is to be patient and understanding as they navigate uncharted emotional territory and to be present to listen and hold them when they are ready to open up.

I frequently think about how unpredictable my life has been in the past year. Just a few days before Borderline, I was feeling the happiest I ever have in my life. I remember so vividly sitting on the beach, watching the most unbelievably beautiful sunset ever, with three of my suitemates.

I remember so clearly thinking about how lucky I was to go to my dream school in a beautiful beach town with the best friends I’ve always hoped for. While all those feelings and thoughts were genuine, it seems so far from what I had felt and thought for the months following.

How could I be on top of the world, able to conquer anything — or so I thought — one moment, and then have what felt like everything taken away later that week?

I arrived at Borderline Bar & Grill an enthusiastic student ready to let loose and dance and enjoy the company of my friends during midterm season, and I left behind one of my best friends and the remainder of my innocence. I’ve always been one to plan every aspect of my life, but the Borderline Shooting showed me that I don’t even know what will happen in the next minute.

Through the unpredictability of life that I’ve seen in the last year, I’ve learned to find peace in new places and at new heights. I’ve realized that it’s OK to not know what’s coming, because I’m more resilient than I ever anticipated. As humans, we know how to bounce back from whatever life throws at us.

Some days, I feel discouraged because I don’t think I’ve grown much since last November, but to see that I survived a mass shooting, lost a best friend, evacuated from a wildfire, took first semester finals, went to therapy, communicated about my trauma with professors when lines were crossed, (barely) passed second semester finals and went abroad, I think I have enough proof to know I have the strength to keep moving forward. I don’t know what the rest of this year has in store, let alone the rest of my life, but I know I’ll be OK.

There are several things I’ve done that have helped me heal. The most important was to spend time doing things that really mattered and with people who support and love me.

Social media is a big part of my life, and I knew I had to make significant changes to how I used it and presented myself. I no longer cared about keeping up an image and showing a highlight reel of my life — which is hard to do when you’re at an all-time low anyway — so once I was ready to return to social media, I started to share about how I really felt.

If you scroll through my Instagram feed, you’ll see posts about my fears, triggers and nightmares. I still share about the fun things I do and places I go, but I don’t feel pressured to put on a happy face and act like everything is OK when it isn’t. I no longer feel the need to keep following any accounts that made me feel bad about myself or others, and I started to surround myself with positivity on a platform notorious for comparison and unhappiness.

I was also inspired by how Alaina was always authentically herself, even in moments people found her weird, and this helped me embrace who I am in front of others. I loosened up on my academic standards, and although this has put my scholarship on the line, I know the time I spent on emotional growth and healing was not wasted.

I spent more time journaling and playing music and having meaningful conversations with the people I love because those are the things I am passionate about and bring me joy and I want to be remembered for. I’ve prioritized my own mental health and processing, and I learned to set boundaries when I could not handle more social interaction or needed space to process my emotions.

My faith played a big part in my healing process. Immediately following the shooting, I realized I had to root myself in what I knew about God. I anticipated many people would ask how I could still believe in Him after surviving a mass shooting and losing a suitemate, so I spent more time in the Word, studying God’s character.

I know He brings hope and peace, and I know the God who was with me at Borderline is the same God who made the sunset I watched at Zuma just days prior and the same God who has walked with me through my healing. I know I can turn to Him no matter how ugly I think my feelings are, and I know He is infinitely more heartbroken over the shooting and Alaina’s death than I can imagine.