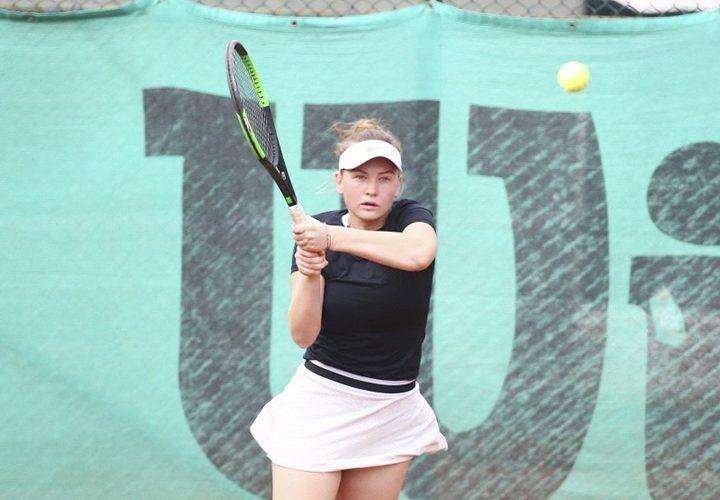 Pepperdine’s decision to have online classes this fall has changed the college experience. In a normal setting, first-year students move to campus and are on their own for the first time. With remote instruction continuing this fall, the majority of first-year students will have to wait before they can come to campus.

For freshman student-athletes, the transition to Division 1 athletics is harder than it has ever been.

Some freshmen experience less playing time and are competing in an entirely new environment that is a step up from high school athletics.

With COVID-19, many freshmen are unable to meet their teammates in person. The ability to train at a high level is limited in many parts of the country due to the closures of gyms and other athletic facilities.

Taisiya Pachkaleva, a freshman from Moscow on the Women’s Tennis team, described the difficulty and disappointment of not being able to come to campus this fall.

“I want to come, but I do not have a visa, and it’s a big problem,” Pachkaleva said. “I hope I can come in September.”

Despite not being able to be in the United States right now, Pachkaleva says she has been able to train well and keep focus.

“In Moscow, everything is opened, so I can have the same process as always,” Pachkaleva said. “I practice a few hours a day, and then I can do class and homework after.”

Kennedi Steele, a freshman from Henderson, Nevada, on the Women’s Volleyball team, said although starting college online is difficult, she has an advantage. 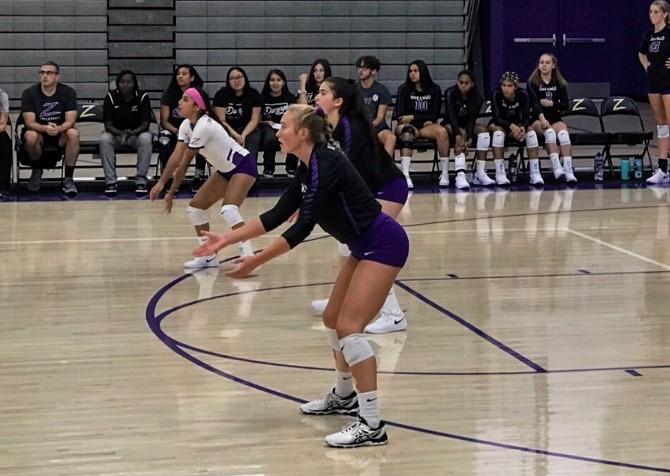 Defensive specialist Kennedi Steele prepares to receive a serve in a match from her senior year in the fall of 2019. Steele planned to play volleyball this fall but is one of many freshmen student-athletes studying from home this semester. Photo courtesy of Kennedi Steele

“I took my junior and senior year of high school online, and I took them through a junior college,” Steele said. “I guess I have an advantage over kids who have never done online school before, so for me it’s been good.”

Steele said she has been fortunate in her ability to continue working out and training, as her father set up a gym in their garage. The indoor volleyball gym in her hometown opened a couple of months ago.

While some athletes are living on campus or in the Malibu area this fall, others like Steele and Pachkaleva are at home for the time being.

“I packed everything, and then two weeks ago they told us that we could not come back,” Steele said. “It was frustrating because I wanted to start the next chapter of my life, and it’s been put on hold. I feel like I am back in high school again.” 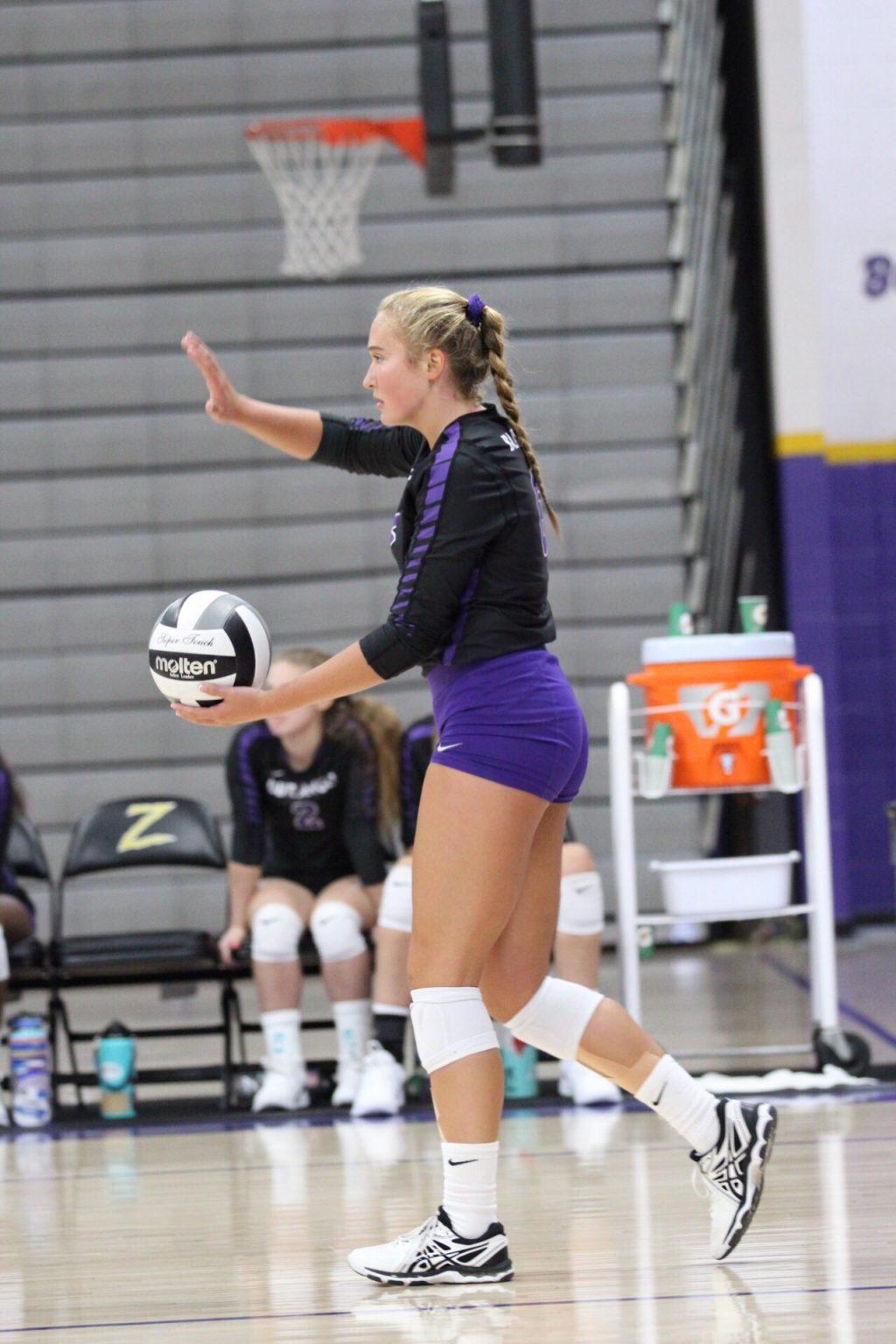 Steele prepares to serve in a game in the fall of 2019. Steele played in the defensive specialist and outside hitter positions during her high school career in Henderson, Nevada. Photo courtesy of Kennedi Steele

Team chemistry is a major factor in terms of team dynamics. In a typical year, most student-athletes would be able to get to know each other well as they spend many hours during the day practicing, socializing and living together.

Most teams have had to try and create that same team chemistry over Zoom meetings, and while it is not the same as being in-person, coaches and athletes are doing their best to become a team.

“I did not speak in person with my teammates,” Pachkaleva said. “We message one another, so I do not know much about them, but I am excited to know them more and become friends with them.”

Last season, the Pepperdine Women’s Tennis team was ranked 13th in the NCAA, and Ashley Lahey was the No. 1 women’s tennis player before the NCAA canceled spring sports this past March. Lahey, fellow graduate Jessica Failla and most of the roster return this season.

Steele said she was on her recruiting trip when Pepperdine went online in March last semester and did not get a chance to meet everyone on the team.

“On Zoom, it has been nice because once a week, we will have weekly meetings where they will split us up into two groups to talk,” Steele said. “Learning about each person’s personalities and views has been really helpful, but it has still been tough because of no in-person connection.”

While the freshmen student-athletes’ first year of college is off to an unusual start, both Steele and Pachkaleva said they are hoping for a good college experience in aspects aside from just their sport.

“I want to see all of my professors and classmates, and of course I want to go to the beach,” Pachkaleva said. “I’ve never been to Malibu and heard it is one of the best campuses, so I can’t wait to get there.”

Steele said she is excited to create relationships with her teammates.

“I am excited to make relationships with people that will last forever and I can cherish for the rest of my life,” Steele said. “The life lessons that I will learn from facing competition and time management will be great as well.” 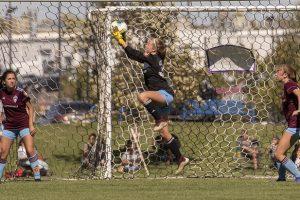 Freshman goalkeeper Ellie Sommers (center) makes a save during a club match in high school. Due to the pandemic postponing...
Copyright 2013 Jupiter Premium Magazine Theme
Back to top