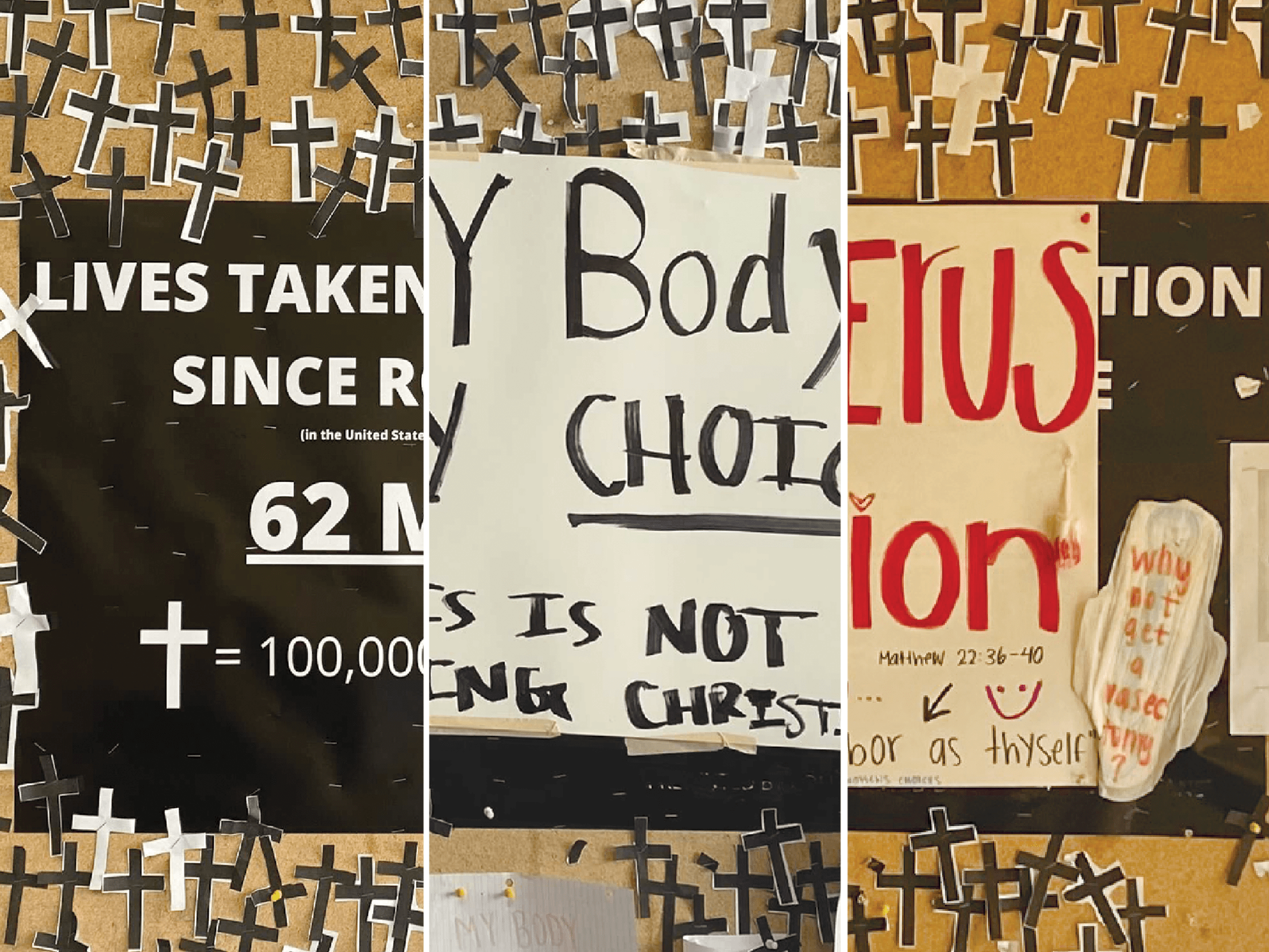 Pepperdine students share their opinions at the Freedom Wall, putting up signs all revolving around the topic of abortion. This is in the wake of Pepperdine College Republican’s post of an anti-abortion display in the evening of Sept. 28, sparking debate among students. Graphic by Ali Levens

Editor’s Note: Pepperdine Graphic Media uses AP style to avoid bias and be consistent in language, as well as to follow other professional news organizations. AP style has the following rules for reporting on abortion, which will be used throughout this article. “Pro-life” will be denoted as “anti-abortion,” and “pro-choice” will be denoted as “abortion-rights,” unless in quotes or proper names.

A collection of signs and symbols greeted students passing the Freedom Wall last week, all contesting the same issue: abortion. The signs covered the expanse of the cork board and trickled off onto the wall below, creating a gallery of student opinions and rebuttals.

Pepperdine College Republicans put up an anti-abortion display Sept. 28, on Pepperdine’s Freedom Wall. Shortly after, other students, many of whom disagreed, covered this display with abortion-rights messages. PCR club members and other students engaged in dialogue and argument regarding the Freedom Wall, culminating in DPS eventually appearing on the scene.

First-year student Peter Briggs said he appreciated the ability to have conversation, though he wished there was a way to have discussions that did not result in hurt.

A Timeline of Events

Before 8 p.m., on Sept. 28, the PCR displayed an anti-abortion statement on the Freedom Wall.

Around 11 a.m., on Sept. 29, senior Ashtyn Adams posted an abortion-rights sign on the Freedom Wall, next to the PCR’s display.

Sometime before 1 p.m., DPS arrived on scene, where students crowded around the wall.

The PCR intended for the Freedom Wall posting to act as a memorial and reveal the “magnitude of the atrocity” of abortion, the PCR club wrote in an Oct. 2 email to the Graphic.

“First and foremost, we wanted to call attention to the 62 million human beings who had a future and a life that was ended by abortion,” wrote the PCR in the email to the Graphic. “We’re proud that our membership is dedicated to advocating for the right to life and with well over a hundred members, we encourage those who believe in conservative principles to join us as many already have since we posted our memorial.”

The PCR received its data for the display from the National Right To Life Committee, according to the Freedom Wall; however, the NRLC was unable to gather numbers from several states and relies on voluntary reporting, some of which is not collected every year, so the validity of the numbers cannot be verified.

The PCR wrote the posting was well-timed because of the passing of anti-abortion laws in Texas in May and the U.S. Supreme Court’s scheduled hearing of a Mississippi law that contests Roe v. Wade — a 1973 SCOTUS case that made abortion legal within the U.S.

“It’s unfortunate that, instead of engaging in respectful conversation, some on our campus decided to desecrate a memorial to 62 million aborted babies by obscuring our message with feminine hygiene products, by turning crosses upside down, tearing down crosses and resorting to tired slogans that are incapable of refuting the scientific and religious fact that a fetus — with its own beating heart, brain, nervous system, DNA, and soul — is a human life worthy of protection,” wrote the PCR in the email.

The Young Americans for Freedom organization offered support for the PCR after viewing videos of the conflict at the Freedom Wall on social media, the PCR wrote.

“We are now calling on President [Jim] Gash and Pepperdine administration to offer a public statement in support of Christian and conservative students whose voices have been suppressed and disrespected,” wrote the PCR. “Silence will only reaffirm the concerns of students, faculty, alumni, and donors who already fear that Pepperdine is straying from its Christian mission.”

Fox News and YAF used students’ videos of the Freedom Wall, which students had posted to social media, to report on the discourse. YAF expressed support for the PCR, and Fox News received a statement from the University.

The statement from Pepperdine reads, “Pepperdine University is committed to free, open, and respectful speech on our campus, a commitment that is rooted in our Christian mission and ethos. We affirm that truth has nothing to fear from investigation. Thus, we believe that public debate on topics important to a free society is enhanced when members of our community freely and respectfully express their viewpoints.”

Adams said, while passing the display, the crosses and dark colors used in the sign grabbed her attention, making her pause. When taking a moment, Adams said she watched other women walk past the sign.

“I could physically see them look at the sign and saw the complete shift in body language, and you could see the hurt in them and almost the shame that was just radiating off of it,” Adams said.

When Adams first saw the Freedom Wall, the only messages on it were those belonging to the PCR’s display. For Adams, the cross is symbolic of God’s love, and the PCR’s usage of the cross in this display was “painful and hurtful,” Adams said.

“There was no room for anyone else’s opinions or thoughts, and it was clearly not supposed to be something that’s a dialogue but something to shame people, to scare them,” Adams said.

Adams was one of the first students to post on the Freedom Wall in response to the PCR’s display.

“I didn’t want people — if that was the only experience that they had with Jesus that day — I just want them to know that is not a representation of what I believe Jesus is and what a Christian should be,” Adams said. “I also didn’t want people who were pro-choice to feel alone.”

Out of respect, Adams said, she did not take down any part of the PCR display; rather, she found an empty space in the margins of the Freedom Wall. Adams put up a quote from Ruth Bader Ginsburg because she said it spoke on women’s dignity and choice.

“It was scary for me,” Adams said. “I’ve never put anything up on the Freedom Wall before, and I felt alone since nothing else was up there and I was by myself, and the only people I could see were groups of guys by this little rock just staring at me.”

Adams said she spent the rest of the day in her dorm and received messages from students, telling her that her post inspired them. Although she appreciated the responses, Adams said she did not intend to contribute to the ensuing conflict at the wall that later occurred.

Students Engage In Discourse At The Freedom Wall

Junior Philip Young said he arrived to the Freedom Wall at 7 p.m., on Sept. 27 and watched the PCR put up the display, and he returned the next day.

“I find abortion personally horrifying,” Young said. “And so I was certainly horrified by the statistic that was demonstrated in that post, but it didn’t cause me to believe that abortion should be illegal.”

At the wall, Young said he did not post or take down anything, but he did engage in conversation with other students.

“I’m glad that an activism project was pursued that could result in increased conversation, although I would prefer to pursue tactics that are maybe a little more persuasive in nature,” Young said.

Briggs said he first saw the Freedom Wall around 10 a.m., when he noticed a large group of students standing around the board. Briggs said he visited the display periodically throughout the day.

“At the beginning, I took some crosses down because, in that moment of anger, I felt like this campus would be better if this was not here,” Briggs said.

As the day went on, Briggs said he saw protest turn into conversation between students. Briggs said he supports abortion-rights and engaged with other students on whether the display on the wall was reasonable, as well as the morality of abortion.

New signs cover the expanse of the Freedom Wall, as students have removed many of the original crosses and abortion-rights signage. First-year student Peter Briggs said he felt the discussions he had regarding the Freedom Wall postings were respectful but recognized that there were also many discussions that weren’t civil. Photo by Samantha Torre

First-year student Gia DaSilva said she first saw the Freedom Wall around 1 p.m., during a break in her class. Her experience at the wall, DaSilva said, was confrontational, especially when she returned later at night, when members of the PCR argued with and filmed DaSilva as she posted signs.

DaSilva put signs on the Freedom Wall to raise awareness for the Oct. 2 Sisters March, and unknown individuals later took down her signs. DaSilva said she learned about the march in her Social Action and Justice colloquium class.

Senior Vanessa Aguayo said she and senior Andy Fest arrived at the Freedom Wall between 2 to 3 p.m. Aguayo said she saw postings about the wall on social media, and Fest and she decided to see and make postings for themselves.

Fest said when Aguayo and he arrived, members of the PCR stood near the wall. Soon after, more students gathered and engaged the PCR in discussion, which became “heated,” Fest said.

Doug Hurley, assistant dean of Student Affairs, did not respond to request for comment about the rules of the Freedom Wall.

Liza Esquibias contributed to this reporting.