A Senior’s Side of the Story 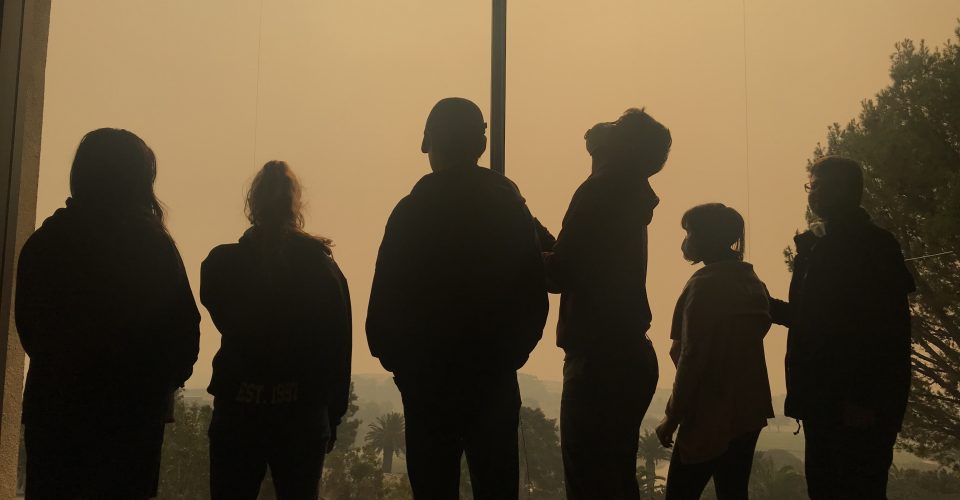 Photo courtesy of Michael Kruel | Students sheltering in place in Payson Library look out the window at Pepperdine’s Malibu campus on November 10, 2018, the morning after the Woolsey Fire surrounded the university.

As I write this, I am sitting in the back corner of the library near the fireplace in one of the chairs where I slept during the shelter-in-place last year. Looking out the window, the view is hazy, obscured by smoke from an other brush fire. I’m wearing a mask again, and other students around me are doing the same. Missing from the scene are the blankets, makeshift beds and pajama-clad individuals. The restless atmosphere, though noticeably lessened, returns at times like these.

We’re now at the one-year anniversary, and our campus has changed.

Out of those on the Malibu campus, the senior class as a whole has experienced more trauma than any other. Those who were first-years are mostly studying abroad; those who were sophomores were abroad last November; and those who were seniors have graduated. Last year’s junior class is the one that remains on campus for the memorial, just as we did last year.

As one of the current seniors who stayed until the end of the November weekend that capped off the week of shooting and smoke, I’m glad to still be here in Malibu as a member of the Pepperdine student body while we remember what happened. Though my class has experienced these events in different ways, we all have that foundational experience of waking up to worried texts and voicemails about the shooting and, the next day, having our alarm clocks turn to calls to evacuate or shelter-in-place.

Even though we each react and process these tragedies in our own ways, we have a similar understanding from a specific standpoint that allows us to connect in a way that I can’t with others outside of this university. We think of the tragedies in terms of Pepperdine and the community, a source of both hurt and comfort the senior class will soon be leaving.

When those who were studying in Malibu think back to last year, we conjure specific images and emotions that parents, friends at home and other family members can’t picture. I share a bond with the group I spent the fire with in Payson that will never break.

We played board games, helped each other through panic attacks and stayed close while we ate ice cream and updated our parents. We watched through the windows as flames crested the hill, were doused by helicopters and sparked again on other hilltops. Together, we checked on other friends in the Caf to make sure they were OK and found out any more information we could.

When I went home to Chicago for that Thanksgiving holiday, my Payson friends and I were there for each other through texting and FaceTime calls in a way that those physically present at that time could have never been. In those two weeks, I had deep conversations over text with people I barely knew, but we had spent that Friday night in the library and swapped numbers.

These events changed me as well as campus culture here in Malibu.

Even though it has been a year since the fire and the shooting affected our community, the trauma still lingers. I received frantic texts during the Sweetwater Fire from friends who panicked from the plumes of smoke. The ashy air from the Wendy Fire during Waves Weekend made me want to curl up inside myself and made others’ eyes water from more than just the air quality. People experience trauma in different ways, and many who experienced Borderline and Woolsey, as well as Pepperdine itself, will continue to feel the effects for years.

As the senior class prepares for life after graduation, we will carry these memories with us, both of the traumatic events and of the community healing. Even after we graduate, we will be connected through these shared experiences during our time at Pepperdine. 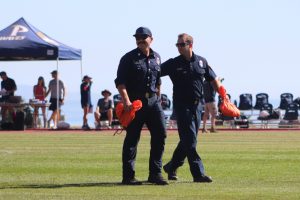 Photos by Ali Levens | Mike Rivera and Alex Abdalla smile at the crowd after being honored at halftime of the soccer game...
Copyright 2018 Pepperdine Graphic
Back to top