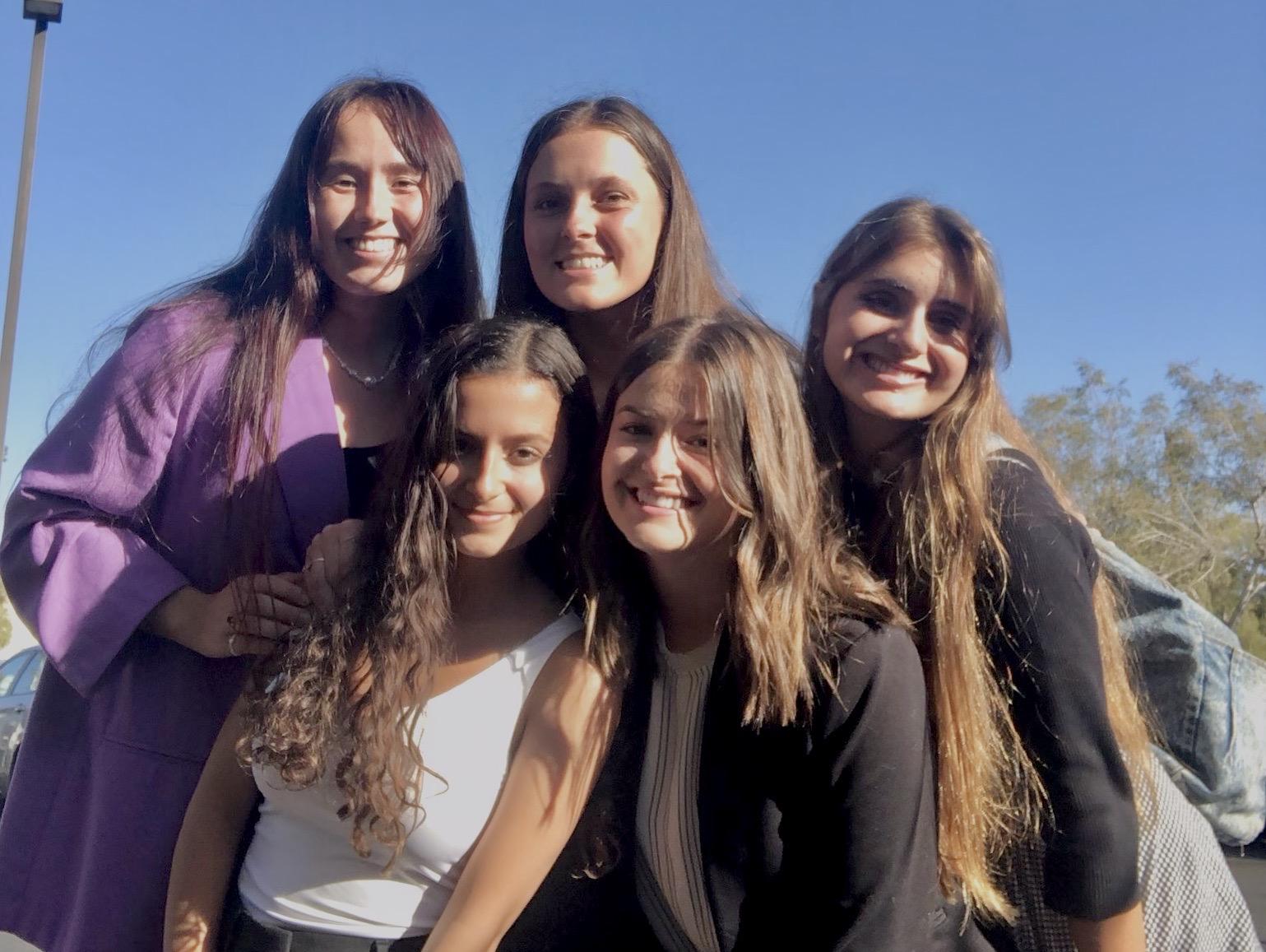 The five YECA fellows unite after a meeting with President Jim Gash and administrators Sept. 15, where they spoke about changes the University can make to be more sustainable. YECA, first introduced to Pepperdine students in 2020, gives each member the opportunity to create their own project promoting sustainability. Photo courtesy of Jayda Kechour

Five Pepperdine students make up an all-women group leading the movement against climate change on campus and beyond.

Young Evangelicals for Climate Action is a national faith-based organization with a fellowship program for college students around the U.S. to run a sustainability-focused project. The mission of YECA at Pepperdine is to create community for Christians who care about preserving God’s creations and teach others of its importance, said Chris Doran, professor of Religion and founder of the Sustainability minor.

“If Christians don’t care about how climate change is impacting not just human creatures but non-human creatures, then I think we’ve lost our way,” Doran said. “There is no issue on the planet that impacts every single creature like climate change.”

What YECA Brings to Pepperdine

In 2019, Doran, received an email from a friend of a former student recommending Pepperdine students get involved in YECA. Doran said by the 2020-21 academic year, the Climate Leadership Fellows Program accepted five Pepperdine students who were ready to take action.

For the past 15 years, Doran has taught about climate change, and he said he feels it is especially important for students at a religious school like Pepperdine to understand that Christian beliefs align with protecting the planet.

YECA’s objective is to inspire environmental change from people, and Doran said students skeptical of climate change are never going to make those changes if the school does not set precedent.

Pepperdine not making a public statement about the climate crisis or having a climate action plan is disappointing, Doran said. YECA members work with administrators to encourage the University to protect the planet as a community.

While the University does not hold a formal position on climate change, according to Nate Ethell, senior director of Communications and Brand Development, it provided a statement to the Graphic via email regarding the topic.

“With a philosophy emphasizing the open pursuit and discussion of ideas, there are a myriad of important issues about which the University does not take a position, thereby encouraging rigorous dialogue and rich educational opportunities among a community of varying ideas,” Ethell wrote. “This doesn’t preclude — and hasn’t precluded — the University from a commitment to sustainability, and it continues to underlie a foundational support for research, thought leadership and appropriate advocacy.”

The 2020-21 and 2021-22 YECA students — both groups of five women — are game-changers in Christian climate activism, Doran said. Being able to mentor them to generate change in a challenging place like Pepperdine, he said, is a particularly meaningful experience.

YECA, Wright said, has given her a community that contrasts her past experience in other spaces where she felt judged for her interest in the climate crisis — especially as a young, religious person.

“The community of sustainability is growing, but it’s still pretty small and not necessarily taken seriously at Pepperdine,” Wright said. “Sometimes when you’re in that sphere all the time, it can get a bit hopeless.”

Wright is president of Pepperdine’s Food Recovery Network and a Sodexo sustainability intern, which she merges together to promote food recovery as her YECA project.

“I’m advocating for things like getting rid of the single-use plastics,” Wright said. “My biggest focus is trying to make the dining experience as sustainable as possible.”

Wright said a way people can reduce waste is to take personal responsibility and be intentional about what they consume.

“We vote with our money — and I don’t mean vote in a governmental way — I mean vote in purchasing a bunch of plastic drinks,” Wright said. “Sodexo knows they need to keep purchasing those items because they’re in high demand.”

When faced with questions about how her religion contributes to her role in YECA, Stephens said she always refers to a foundational teaching of the Bible.

“We’re taught to love our neighbor as ourselves,” Stephens said. “If our actions — what cars we drive, what food we eat, how we live our lives — if that is causing climate change and causing harm to our neighbors, then is that really loving our neighbors?”

It is important to Stephens, she said, to relate climate change to people’s lives and share the stories of those affected.

“The fires that came through Pepperdine in 2018 — I was here, I was sheltering in place in the cafeteria — and that’s partly because of climate change,” Stephens said. “If you share that — ‘Remember what Pepperdine went through?’ — then we could do something to combat that and hopefully make sure that doesn’t happen again, by reevaluating your views on climate change and your actions against it.”

Junior Allie McMullen, a Political Science and Sustainability double major, said her project focuses on educating other students about the ties between faith and climate change.

While the creation of the Sustainability department and having professors like Doran is beneficial to the Pepperdine community, McMullen said the University must make several big changes before she feels proud of Pepperdine’s efforts against climate change.

“We really should have better education with our GE requirements about what creation care looks like,” McMullen said. “It’s important and something all of us as Christians should know — and non-Christians should know. It’s how we better take care of our environment and protect us and other people around us.”

Eager to invoke change to reverse the climate crisis, McMullen said reducing food waste and water usage, as well as voting in local and national elections, are small steps to have a bigger impact. McMullen said she often shares these suggestions with other students as part of her project.

“Voting is huge,” McMullen said. “Using your voice and stepping up and advocating for policies and for different people who care about climate change and want to take it seriously is a really huge part.”

Senior Sustainability major Florencia Padilla said being a YECA fellow pushed her to be a strong advocate for climate action.

“I just want to be part of the solution of helping these vulnerable communities build and adapt to a climate-changed world,” Padilla said. “It’s something close to my heart to help displaced communities, and I feel like YECA helps me fulfill my mission.”

Padilla’s project is a website that sends out newsletters and posts information about the environment to educate people outside of typical media coverage.

“My idea for that is to inform people from an unbiased perspective — politically in that regard — but I just want to shine some light on how climate change is already affecting people worldwide and in communities and other countries, and even in our local area,” Padilla said.

To become more educated and insightful about the climate crisis, Padilla said students should get involved on campus.

“Supporting all our projects — that’s a great way to be educated and get involved and push for change,” Padilla said. “We’re not a perfect campus, I wouldn’t say, but we can be a leading campus; I really do have faith in that. And we have to do this with education and action — and constantly fighting for that.”

Senior Sustainability major Jayda Kechour said she is proud to be a voice in the movement for climate action.

Her love for nature and fresh produce sparked an interest in the agriculture industry, Kechour said. Without information on how the industry functions, Kechour said understanding the role of diet in preserving the planet can be confusing.

Kechour said Doran made her feel less alone in her views on the importance of tackling the climate crisis head-on as a Christian.

The motto of Kechour’s community garden project, she said, is “Route to Roots.” Kechour said she encourages intimacy and personal interest in the earth and all it has to offer.

“The communal aspect of coming together at a table and eating what came from your garden — that’s powerful, that’s sacred,” Kechour said. “You worked the land, you cared for the soil, you took intentional steps to water your garden. And so, when I think of that, I imagine God’s intentionality for creation in the very beginning.”