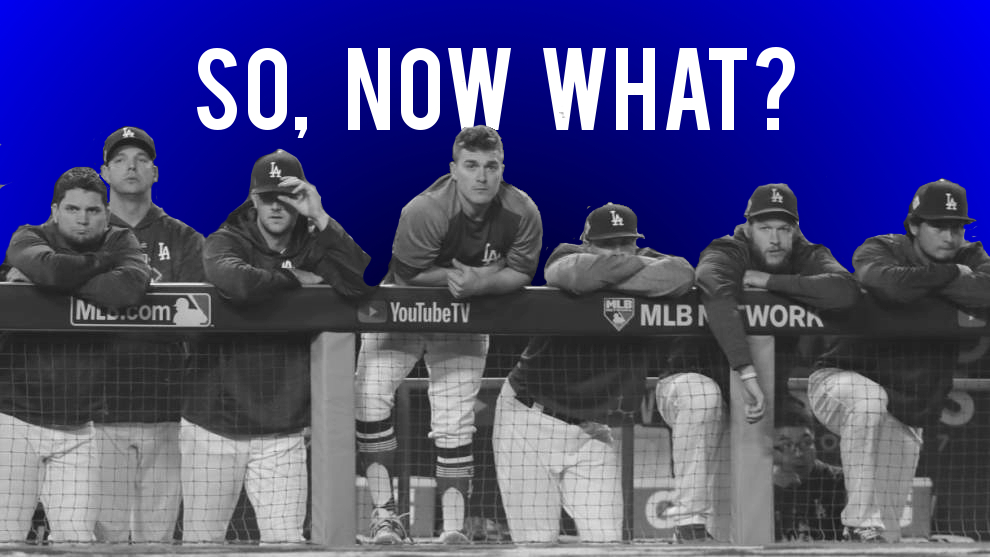 The Los Angeles Dodgers’ season came to an end on Nov. 1 with a 5-1 Game 7 loss at the hands of the Houston Astros.

Now that some time has passed after the seven-game rollercoaster that was the 2017 World Series, Graphic writers Kyle Cajero, Arthur Puu and special guest Rudy Gonzalez debrief their thoughts on the Dodgers’ 2017 season.

My Heart Will Indeed Go On— Arthur Puu

Game 7 didn’t go as planned for Dodgers fans, but it was a great season regardless. Yet it was an AMAZING, high-octane World Series that pushed all baseball fans to the edge of their seats.

From going 43-7 in a span of 50 games to the 11-game losing streak, I am always proud to bleed blue. Here’s a compilation of the top plays of the season (h/t to r/dodgers, u/Swagged_Out_Custar)

Let’s not forget to congratulate the Astros for winning the championship here too. Just a few seasons ago, the franchise was sitting at the bottom of their division, suffering six straight losing seasons (three straight with 100-plus losses). Yet after missing the 2016 postseason, they bounced back to win their first World Series title in franchise history.

That stuff isn’t made up. Sometimes, you just have to #TrustTheProcess, right Sam Hinkie?

I love it when a plan comes together.https://t.co/JVEq8ScDGC

Now look, there’s a lot of hope going forward for Los Angeles. The great thing about the Dodgers’ World Series run is that it wasn’t a final push made by a group of veterans at the end of their primes, but a collective effort by a solid blend of veterans, kids and guys who haven’t even hit their prime.

Julio Urias is 21. Cody Bellinger is only 22. Corey Seager is 23. Joc Pederson and Andrew Toles are both 25. Kike Hernandez, Yasiel Puig and Alex Wood are 26. Austin Barnes and Chris Taylor are 27. Looking at the roster, the only “old” veteran the Dodgers have that played a huge role on the team is Rich “RakeMan” Hill, who is 37 (will be 38 by the start of next season). Everyone else is either in their late 20s or early 30s. Add in Alex Verdugo and Walker Buehler from the Dodgers’ farm system, and that’s a bright future to be a part of.

That’s a lot of extra money to chase a superstar through free agency or pursue a trade to add on to an already-proven World Series roster.

“There will be a new day, and eventually a new year, and when the upcoming winter gives way to spring, ah, rest assured, once again, it will be time for Dodgers baseball!”

See you in 2018, Dodgers and thanks for the memories!

Not with a Bang, but with a Whimper — Kyle Cajero

Game 7 was not how the season was supposed to end.

I know. That makes me sound like I’m a typical, salty Dodgers fan. Of course, I’m going to say Game 7 didn’t turn out how myself — the protagonist of the universe — or Dodgers faithfuls thought the season should have ended.

But given all of this season’s unforgettable moments — heck, or even the World Series’ instant classic with Game 5 — a 5-1 game that was basically over by the fourth inning was not a fitting end for the 2017 Dodgers.

The 2017 Dodgers were too fun to be eliminated in a soulless, 5-1 contest (cues music).

I’ll remember the 2017 Dodgers for two main reasons. First, for the 42-8 record from June through July, spearheaded when 22-year-old prospect Cody Bellinger gave the offense a shot in the arm:

Then I’ll remember the Dodgers’ 10 walk-off wins — each of which seemed more bonkers than the last — with the most dramatic being backup catcher Kyle Farmer’s walk-off hit in his MLB debut:

A #walkoff hit to give the @Dodgers a comeback win in the 11th – their EIGHTH straight. NBD! pic.twitter.com/fIRZpCacRd

Yet this season also had its less-than-stellar moments.

Outfielder Andrew Toles season ended with a torn ACL on May 10, which seems like ages ago. There was the shaky 9-11 start, in which the Dodgers not only lost to the Chicago Cubs on the night the defending champs raised their championship banner, but also were torched by the Arizona Diamondbacks in their first head-to-head series of the season.

Rich Hill’s near-perfect game against the Pirates on Aug. 23 would have been the low point of the season, but then Los Angeles went on a 5-15 nose dive over the next 20 games.

Hindsight bias aside, playing all seven games of the World Series was the only option for this Dodgers team. They had a penchant for the unpredictable, and an aversion for dull moments.

The 2017 Dodgers, and the fans who endured through every rise and fall of the thrill-ride of a season, deserved a better ending to a truly magical year. The 5-1 game with 11 men left on base and so many zeroes in the line score just didn’t seem right.

But then again, if Game 7 was anything like Game 5 — or even last season’s Game 7 —the loss would’ve been tougher to swallow.

So, Now What? — Rudy Gonzalez

Next year, they bring back their core of Corey Seager, Cody Bellinger and Justin Turner, plus pitchers Clayton Kershaw and Kenley Jansen. Yasiel Puig showed he could hit again and play gold-glove defense in right. Austin Barnes showed his potential behind the plate and with the bat. Joc Pederson gave us JOCTOBER. Rich Hill looked like a man that does not want to use a bucket as a restroom again. Kiké Hernandez was once again the super utility LHP-killer he was in 2015. And lastly, the most important narrative this season, the Tony’s won my heart <3.

The Dodgers look set for another postseason run in 2018, and you know what they say: Sixth time in a row and 11th-straight appearance without winning a title is the charm (or something). However, another NL West title won’t be easy, because nothing in baseball is easy.

The Diamondbacks showed they could win 93 games and return their core too, though they may be without J.D. Martinez, who slugged 29 home runs in 62 games after being acquired midseason. The Rockies’ hitters will never go hungry in hitter-friendly Coors Field, and if their rotation can take another step forward (as they did this year), expect them to improve on their 87-win season.

Who knows? Maybe the Padres will surprise everyone and win 95 games on their way to winning the division. Maybe the Giants really aren’t ready to regress. Maybe they’ll turn their future No. 2 overall pick next year into a late-season rookie of the year and go on another “Even Year Magic” run (someone told me 2018 is an even year).

All in love is fair and all in baseball is dumb luck. Luckily, the Dodgers pay a bunch of guys in their front office who are good at finding luck the sabermetric way. Here’s to the Dodgers having some more luck next year. In the meantime, retweet this now: