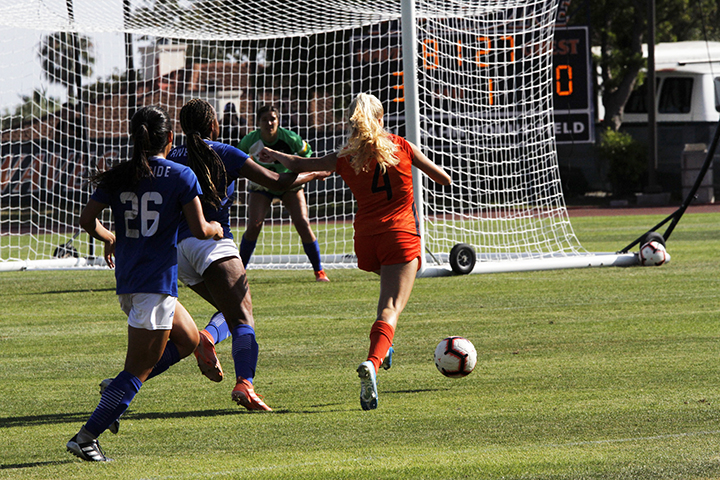 Pepperdine Women’s Soccer opened the season with a 3-0 victory versus the University of California, Riverside. Twenty different Waves played throughout the game as Pepperdine won their home opener for the 11th straight year.

The first 30 minutes of the game were a defensive battle as both teams were competitive and traded offensive surges, which each defense quickly dismantled. The first goal didn’t come until the 38th minute when there was a scrum near the UC Riverside goal and goalkeeper Allie Bailey nudged the ball into the net for an own goal.

As the half came to a close, sophomore midfielder Madi Cook streaked down the field and passed the ball to the left side and set up junior midfielder Brie Welch for the first offensive goal of the season at the 44th minute.

“I saw that Madi [Cook] had some space going down the field,” Welch said. “Coach always tells me to just live on the line and go for it. I saw the opportunity to spin and I put it in the corner.”

Coach Tim Ward was happy to see his team score a goal that close to the end of the half.

“The second goal was so pleasing because of the timing of it,” Ward said. “There was a minute left in the half before we got it to the corner, and Madi played a great ball and got it into Brie [Welch]. That was a special moment.”

Redshirt freshman defender Olivia Packer sat out last season with shin splints. As a former Gatorade Player of the Year in Nevada, Packer was glad to get back on the field and record one steal in 53 minutes.

“It was so great — best feeling ever to get back out there,” Packer said. “Last year was tough, but being on the field today has been so fun, especially with the team around me.”

Another young defender that contributed with one of the five steals for Pepperdine was sophomore Trinity Watson. Watson played in 18 of 20 games last year as a freshman and looks to have a significant sophomore outing. Watson said she felt the victory is a preview of many more to come this season.

“We came out really strong,” Watson said. “It gives us such a positive outlook on the rest of the season. We’re a pretty young team and have so much to learn and grow from after this first game.”

In the second half, the Waves continued to attack on offense, and freshman midfielder Shelby Little picked up her first goal of her career off an assist from junior midfielder Joelle Anderson. It was the last score of the game.

Ward said he was pleased with his team’s performance but is ready to improve further.

“I’m very happy with the result,” Ward said. “What I told the girls after the game is that anytime you win three-zero and still feel that there is a lot to improve on, you’re in a good spot. We had some early season jitters but got out of the gates and played well.”

This Pepperdine team is replacing seven seniors from last season, two of which were drafted into the National Women’s Soccer League. Watson said she is optimistic for this year’s team as they look to replace the experience of former players.

“When the seniors left, their culture left too,” Watson said. “This team is building a new culture, and we’re off to a strong start with that. We don’t have as many players to look up to, but our principles and discipline is the same, and that’s really going to help us.”