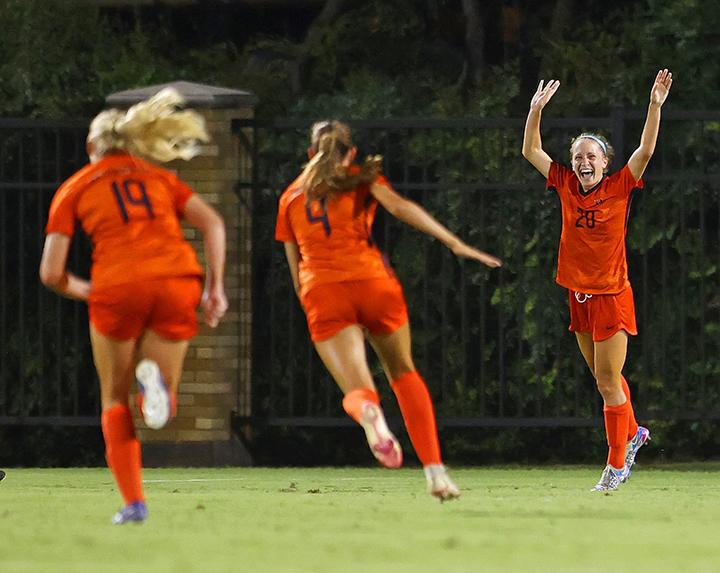 Pepperdine sophomore forward Tori Waldeck celebrates her goal against TCU on Sept. 16 in Fort Worth, Texas as teammates Joelle Anderson (16) and Carlee Giammona (19) run toward her. Waldeck’s goal was the only one of the match and the Waves knocked off the No. 5-ranked Horned Frogs 1-0. Photos courtesy of Ellman Photography

Pepperdine Women’s Soccer is reaching territory it hasn’t seen in a decade — or two:

Best road record — ever. The Waves have never started a season 7-0 in matches away from home, until now.

Something is in the sprinkler water on the new Bermuda grass at Tari Frahm Rokus Field, because a team that went 6-5-1 in the spring 2021 season is now playing like a national championship contender.

“That struggle was good for us,” sophomore forward Tori Waldeck said. “Because we now see that we can really show our talent that might have not been shown last year, and just be able to take each team on and show them what we have.”

With a nearly-perfect non-conference campaign behind them, the Waves will now turn to their West Coast Conference schedule and attempt to build momentum toward the postseason.

“I don’t think the non-conference segment could have gone any better,” Head Coach Tim Ward said. “That one loss was actually a huge gift. It was a blessing in disguise. And it reminded us of the t’s we need to cross and the i’s we need to dot.”

Then-No.9 Pepperdine traveled to Texas for their biggest challenge of the early season Sept. 16 — a showdown with then-No. 5 Texas Christian in Fort Worth.

The Waves stunned the Horned Frogs with a barrage of shots and the game’s only goal, a 65th-minute score off the foot of Waldeck.

“The ball actually took an unfortunate bounce away from me,” Waldeck said. “But then I was just able to spin around the defender, saw the ball right by my feet, and just slotted it in the back of the net on the ground. Part of me blacked out in the moment because I feel like it just happened so quick.”

The victory marked Pepperdine’s first road win over a top-five opponent since 2003. 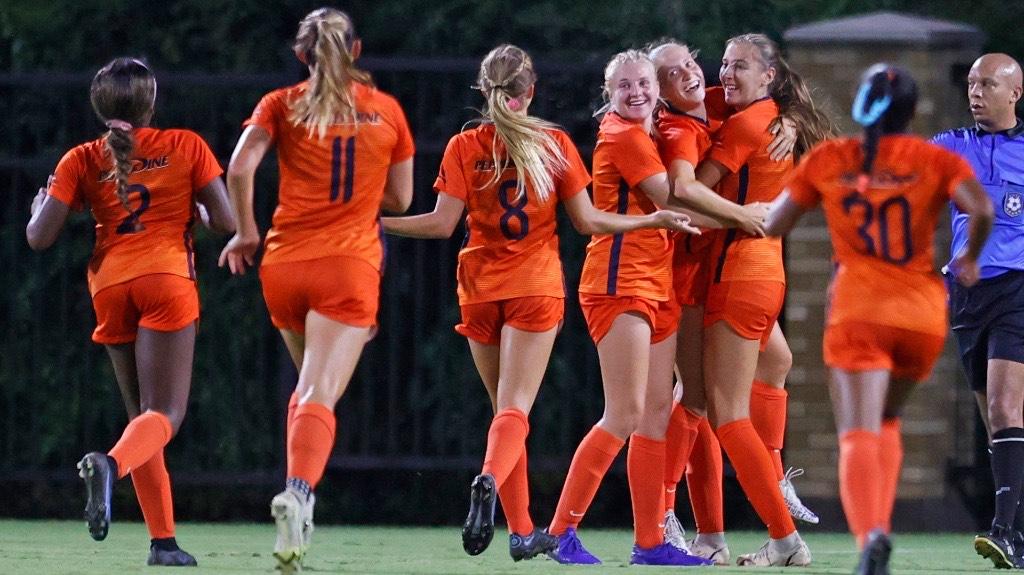 The Waves celebrate Tori Waldeck’s 65th-minute goal against TCU in Fort Worth, Texas on Sept. 16. Pepperdine’s two wins on their Texas trip ran their overall record this season to 9-1-0.

Three days later in College Station, the Waves handed Texas A&M its first home loss in 14 games with another 1-0 scoreline.

The only goal in that match came in the third minute, courtesy of redshirt senior forward, Joelle Anderson. Waldeck navigated the middle of the field and delivered a pass to Anderson in on the right flank, and Anderson beat a defender with her right foot before beating the goalkeeper with her left.

“[Anderson] did what she does best — she cut the defender and just slotted it in the back of the net,” Waldeck said. “After that we were still putting them under pressure, but I think it’s good for us to have to defend a 1-0 lead, because as the season goes on, games are going to get harder and harder as teams get better and better.”

Waldeck earned WCC Offensive Player of the Week honors for the first time in her career for her efforts in Texas.

Redshirt senior goalkeeper Zoe Clevely and the Waves’ defense posted their fifth and sixth clean sheets of the season on the road trip, and have only allowed five goals in the team’s 10 matches.

“A lot of what we talked about is getting comfortable being uncomfortable,” Hill said. “Being on the road is always hard, especially in Texas when they have a bunch of fans screaming at us the whole time. They would not stop yelling. They’re yelling at Tim [Ward] and [assistant coach] Max [Rooke], like heckling them — so it was just crazy, a really fun environment to play in.”

Pepperdine begins WCC play Saturday against Portland with a target on their backs — they are ranked higher than each of their conference rivals, including reigning national champions Santa Clara, who are off to a rough 3-4-2 start.

Hill said the Broncos’ national title in the spring lit a fire under the Waves.

“We were happy for them — it’s huge for our conference for someone to win the national championship,” Hill said. “But we were kind of mad about it just because we were stride for stride with them. We have [weird] games against them all the time — it’s back and forth, goal here, goal there.”

The Waves’ previous two matchups against the Broncos both ended with the unusual score of 4-3 — Santa Clara staged a second-half comeback to overcome a three-goal deficit in 2019, then got the overtime winner in a back and forth match in spring 2021.

This season’s edition of Waves vs. Broncos will take place in Santa Clara on Oct. 20, but it will not be the only test for Pepperdine in WCC play.

Gonzaga will visit Malibu on Oct. 16, and the Bulldogs rank No. 16 in the country this week. BYU, who will be Pepperdine’s final road test before a potential postseason appearance, has received votes in the United Soccer Coaches poll all season.

Ward believes the WCC can get four teams to the NCAA Tournament this season.

“We try to approach every game with a certain amount of humility, in terms of, ‘Hey, the opposition’s real good, but, so are we,'” Ward said. “It’s that nice balance we’re trying to strike — a nice balance between respect, humility and confidence.”

Ward’s team will do that with depth, as 27 players on the roster have already seen the pitch this season, and putting the team performance over individual honors.

“There’s a reason why we have ‘Pepperdine’ on the back of their jerseys and not their last names,” Ward said.

“The benefit of having fifth years or seniors in the heart of your defense is that they’ve been through a lot of wars, and they’ve seen almost everything,” Ward said. “I won’t say everything but they’ve seen a lot.”

Hill said the team’s strength is not in its individual players, but buying into one collective mission.

“We had some unfinished business, especially with last spring,” Hill said. “One of our goals this year is to play more games than any Pepperdine team has.”

No Pepperdine Women’s Soccer team has ever made it beyond the Sweet Sixteen of the NCAA Tournament — they did that in 2002, 2005 and 2014. This year’s Waves are on a mission to surpass that milestone.

Catch the Waves on Saturday, Oct. 2, at home at 1 p.m. PDT as they take on the Portland Pilots.