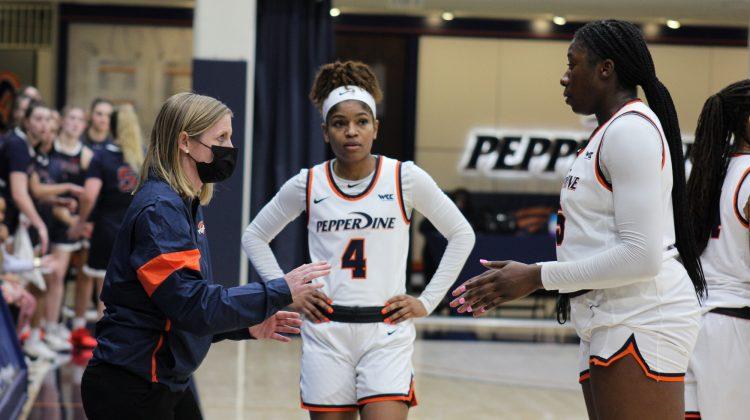 Pepperdine Women’s Basketball battled back to defeat Saint Mary’s 70-65 in overtime Jan. 31, at Firestone Fieldhouse. The game was fiercely competitive throughout, featuring 16 lead changes and 14 points where the Waves and Gaels were tied.

After another win against Loyola Marymount on Feb. 3, Pepperdine is now 7-9 overall and 3-4 in conference play.

“I wouldn’t have been able to do it without my teammates,” Obinma said. “They definitely were the ones that were encouraging me. I just learned that, when I get in, I just have to do my thing.”

The Waves entered Monday night with a 5-9 record overall and a 1-4 record in conference play. Saint Mary’s is a familiar opponent for the Waves, because the two teams met in Moraga, Calif., on Jan. 15. The Gaels won that encounter by a comfortable score of 70-53.

“They had 42 points in the paint,” Obinma said of the last game against the Gaels. “The paint is our house. That’s what we had to do: take care of the paint. All I knew was I had to do my best to lock up and do what I do best, which is defense.”

In the first quarter, the Waves struggled to find a rhythm on either end of the floor. On offense, the Waves turned the ball over on the first two possessions, and scored only three points inside the first eight minutes. Bambrick struggled to get shots to fall, as did the rest of the Waves. Bambrick turned it around later, finishing the game with 10 points and 2 steals.

Defensively, the Waves struggled to contain the Gaels in the first quarter. Saint Mary’s started the game aggressively, and forced the Waves into committing five team fouls inside the first four minutes. The Gaels went on a 11-1 scoring run after giving up the first basket of the game, and took a commanding 11-3 lead.

After finding their offensive rhythm at the end of the first quarter in the form of a 6-0 scoring run, the Waves entered the second quarter down only 11-9. Givens was electric off the bench in the second quarter. After redshirt junior guard Jayla Ruffus-Milner hit a mid-range basket to tie the game at 11-11, Givens scored the Waves’ next seven points to give them a 18-16 lead.

“Cheyenne is a spark plug,” Head Coach Kristen Dowling said. “When she gets an opportunity to go in, she normally sparks us off the bench. She’s done a great job.”

Bambrick and freshman guard Ally Stedman combined effectively in transition on a number of occasions, helping the Waves get quick baskets. With 1:20 left in the first half, Stedman stole the ball on the left side and launched it down-court to Bambrick, who took three or four dribbles before laying the ball up into the basket.

This put the Waves up 28-25, and though they’d give up a basket in the closing seconds, they took a 28-27 lead into halftime.

“They [Saint Mary’s] were being the aggressors,” Givens said. “So we needed to respond well to that.”

The Waves and Gaels traded baskets to start the third quarter. With 6:45 on the clock, Givens capitalized on the Gaels’ offensive indecision, cutting between two of their players to steal the ball and carrying it down the court for a layup and a 33-31 Waves lead.

Neither team would score for the next two minutes, as both teams seemed to prioritize defensive security. The Gaels found hot hands in guards Makena Mastora and Tayla Dalton near the end of the third quarter, as they led Saint Mary’s in scoring with 16 and 12 points in the game. The Waves trailed 42-39 going into the fourth quarter.

The fourth quarter remained as contentious as the third. With the Waves down 44-42, Givens dove off the court during a defensive possession to retrieve a bouncing ball for the Waves. With 4:42 left on the clock, the Waves and Gaels went into a media timeout tied at 46-46.

“A lot of it came down to the free-throw line,” Dowling said. “When we needed to, we hit important free throws, and that was the difference maker. We talked about how we needed to make free throws and we needed stops, and at the end of the day, that’s what we did.”

When the teams came back on the court, Obinma took over. The Waves fed her in the post on consecutive possessions, and she scored on both opportunities, putting the score at 51-50 in favor of the Gaels. With two minutes left, Brasilis launched a three-pointer that bounced twice on the rim before rolling through the net. As the scoreboard changed to 53-51, the Waves bench erupted.

“I told my teammates, ‘We’ve already played 39 minutes, this is just 40 seconds more,’” Givens said. “Just take it one possession at a time.”

With nine seconds left, Gaels forward Ellie Croco charged to the basket from the outside. As the ball arched upwards toward the backboard, Obinma stepped in and swatted it away. The Gaels were not able to get another shot off before time expired, and the game went into overtime.

“I just get excited to block shots,” Obinma said. “It’s something that I enjoy doing. When anybody’s coming against me, I think it should be a difficult matchup.”

Overtime was a game of free-throws and fouls. The Waves scored all their remaining points from the charity stripe, going 11-for-14 as a team through the period. The Gaels shot 20% for field goals and 50% from the free-throw line in overtime. The Waves celebrated as time expired and the final score read 70-65.

“Every game is important, you just take them one at a time,” Dowling said. “But I think this was super important. We needed to split with Saint Mary’s.”

Pepperdine began a three-game road trip Feb. 3 with a game at Loyola Marymount, which they won 64-60. Next, the Waves travel to San Francisco on Feb. 5.