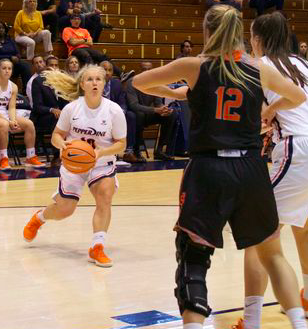 Pepperdine Women’s Basketball opened up their first two-game homestand of the season after going 2-1 with road wins over Long Beach State, 83-71 and Nevada, 77-72. The Waves hosted Seattle in the home opener on Sunday, Nov. 19 and Idaho State on Tuesday, Nov. 21.

In the first game against Seattle on Sunday afternoon, the Waves lost in a 65-62 thriller. Junior Yasmine Robinson-Bacote recorded her second straight double-double with 25 points and 14 rebounds. Senior Peyton Langston finished with 12 points and three assists.

Pepperdine jumped out to a hot start in the first quarter, taking a 13-2 run, but Seattle rallied to cut it to a 15-12 game. Both teams traded baskets through much of the second, but the Redhawks caught fire from three late to take a 32-31 lead at the half.

Coming out of the break, Seattle pushed the lead to 47-42 in the third, but the Waves kept it close, taking a 56-55 lead off an 8-0 run. The game went down to the wire in a one-possession game in the final minutes, with Seattle up 65-62 with six seconds left to go. Sophomore Sydney Bordonaro got a good look from the three-point line to try and push it to overtime, but the shot rattled out, as Pepperdine dropped the home opener, 65-62.

Pepperdine defeated previously undefeated Idaho State, who entered the game 4-0, in the second game, 80-74 on Tuesday afternoon. Reigning West Coast Conference Player of the Week Robinson-Bacote scored a career-high 34 points to go along with 16 rebounds (tied for her career high) and freshman Monique Andriuolo added 13 points and five rebounds.

The Waves came out of the games on fire, taking an early 10-5 lead, but both teams exchanged the lead for much of the half before Idaho State took a 36-31 lead going into halftime.

The second half was much of the same, as both teams continued to exchange points, but Andiuolo keyed a late 12-4 run in the third to give the Waves a six point lead, 61-55 after three. Pepperdine continued to stay hot in the fourth, pushing their lead to double digits, 72-60. Idaho State made a late run to cut the game to five, but the Waves were able to hang on, winning 80-74.

On the win against Idaho State: “When we crash the boards on both ends and make shots, it becomes a fun game where we can run,” Yasmine Robinson-Bacote said. “I’m just happy that we were able to get the win and have fun in the process.”

On Robinson-Bacote’s career day: “For Yasmine, you don’t even have to draw plays for her,” Head Coach DeLisha Milton-Jones said. “She is a baller with a baller’s mentality and we just have to make sure we give her lanes to operate and attack.”

On first career home win: “Yay! I like that,” Milton-Jones said. “I’m happy this is the team’s first home win under a new regime. I’m also really happy for the girls that they can go home over Thanksgiving break on Cloud Nine.”

On the upcoming matchup against UC Irvine: “First off, we’re gonna take a good break during Thanksgiving and get back and work on the little things,” Robinson-Bacote said. “We have to continue building up the little things that we missed from this game and find what we did in the second half [against Idaho State] and go from there.”

Pepperdine will travel down the 405 freeway to take on UC Irvine on Thursday, Nov. 30 at 7 p.m.

The Sky's the Limit: Caputo is soaring 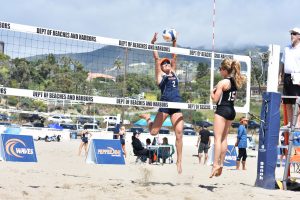 The Sky's the Limit: Caputo is soaring