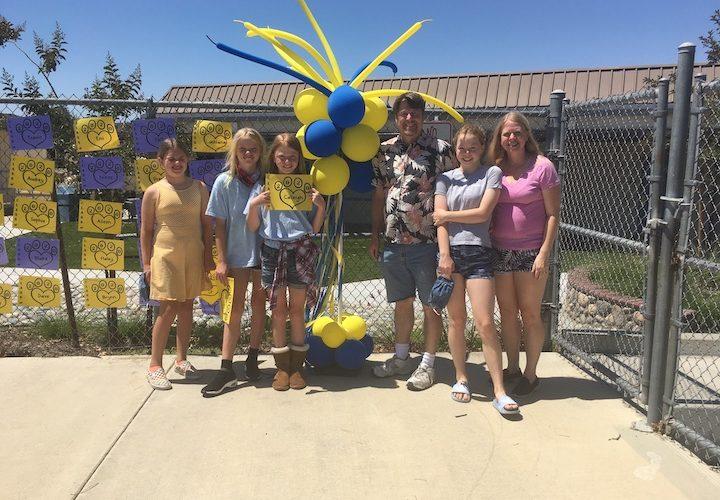 Professor Loretta Hunnicutt poses for her daughter’s fifth grade drive-through graduation near the beginning of quarantine. Hunnicutt said she had difficulty balancing her personal and professional life during COVID-19. Photo Courtesy of Loretta Hunnicutt

Correction: The University’s dependent care grants are up to $500. This number was incorrect in the original version of this story.

The impacts of COVID-19 are not gender neutral, and the pandemic exacerbates pre-existing inequalities, as women are disproportionately facing job losses.

Following the lack of in-person school and child care amid the pandemic, 2.5 million women left the workforce compared to 1.8 million men, according to a February New York Times article. Although professors have more flexibility than working mothers in other fields, they still struggle to balance their careers and families during the pandemic. Women faculty with children reported spending less time on research and more time on child care, potentially leading to long-term economic insecurity, according to the National Bureau of Economic Research.

“Many of us want the glass ceiling to have been smashed, but it’s still there,” said Felicity Vabulas, professor and chair of the Seaver Committee on Women Faculty. “The pandemic exacerbated this divide.” 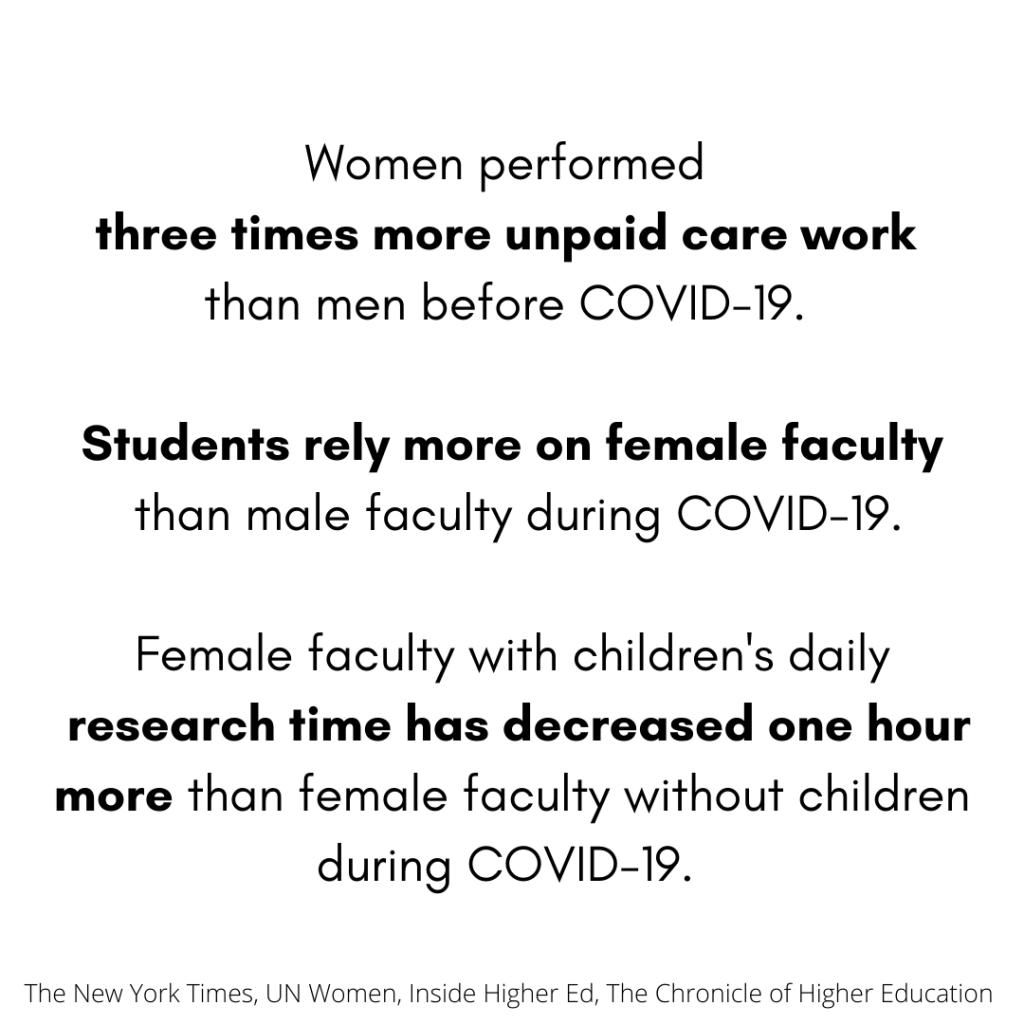 Child Care and the Mental Load

The pandemic presents unique challenges to working women, and professors are no exception.

“In any sector and in any role, some women found it to be just too difficult to work from home, to homeschool their children and perhaps even watch over senior family members,” said Bernice Ledbetter, director of the Center for Women in Leadership.

The three women faculty members interviewed said assisting their children with remote learning remains difficult and more time-consuming, even after one year of practice. Although many working fathers also contribute, data shows women assume a larger role. Even before COVID-19, women spent an average of 4.1 hours per day performing unpaid work, while men spent 1.7 hours, according to UN Women.

“Not only is my time dedicated more toward them rather than my job during the day, but the job doesn’t go away, so it’s almost like my hours just extend into infinity,” said Vabulas, who has two sons, ages 9 and 6. 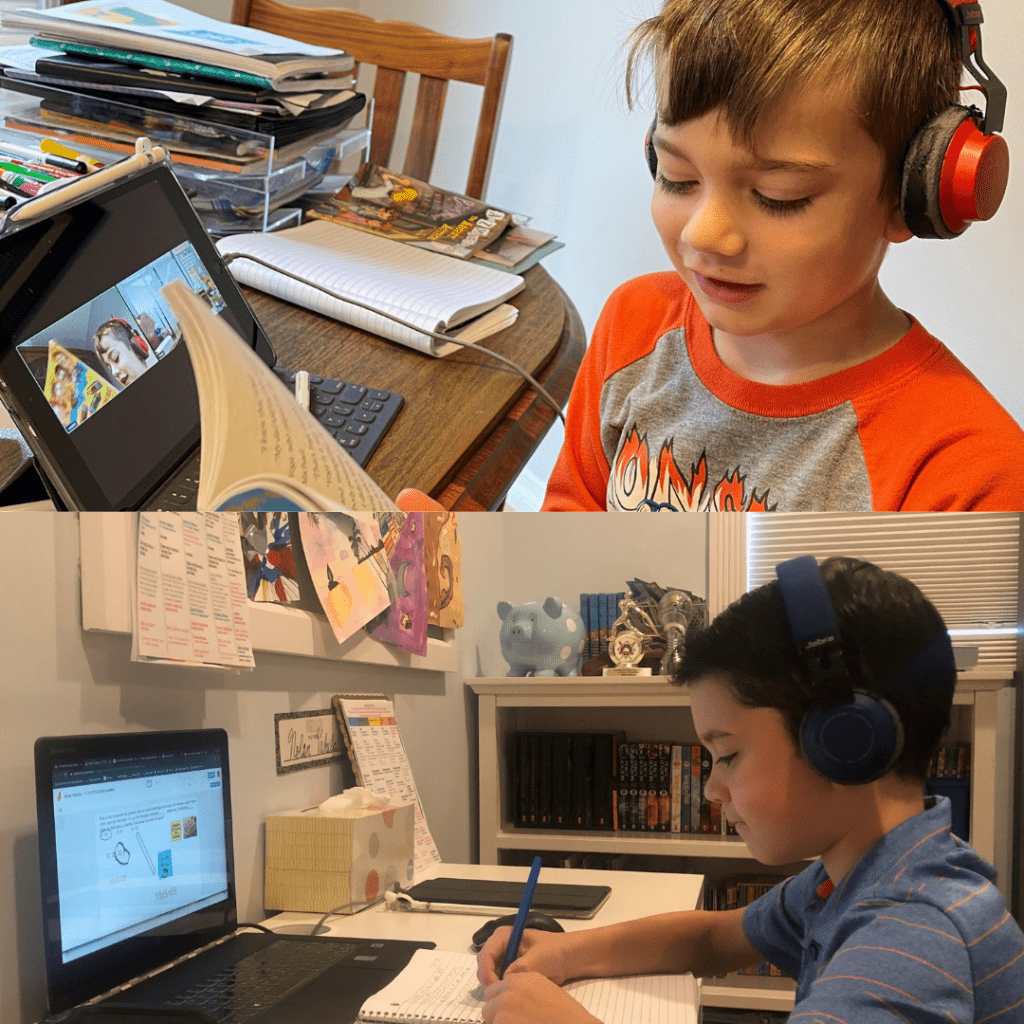 Professor Felicity Vabulas’ children, 6-year-old Landon (top) and 9-year-old Nolan (bottom) complete assignments for school near the start of quarantine. Vabulas said she often worries about their screen time and said even after one year of online learning, young children will never be fully independent on Zoom. Photo Courtesy of Felicity Vabulas

The three women faculty agreed that because of their gender, they also tend to carry more of the mental load — or the stress of overseeing child care and household management, than their husbands — even if the visible workload is equal.

Regardless of whether they have children, women professors — especially women of color, who often invest more invisible labor — may also spend more time providing non-academic support for students. During times of crisis, including COVID-19, students lean on women faculty more heavily than men faculty, according to an Inside Higher Ed article.

“We love those close relationships, but during a pandemic when people are sort of mentally and emotionally taxed in a lot of ways, the nurturing that we were doing pre-pandemic has sort of exacerbated,” Vabulas said.

Although the added preparation required for online teaching impacts men and women faculty, the three professors interviewed said they have struggled with productivity and work-life balance more than their husbands, often having to prioritize their children’s needs over their students’.

“There is no respite time from caregiving, so I think it’s the cumulative effect of the pandemic that’s very stressful as well — dramatically diminished uninterrupted time for work,” said Hispanic Studies Professor Lila McDowell Carlsen, who helps her 8-year-old son on Zoom and homeschools her 5-year-old daughter. 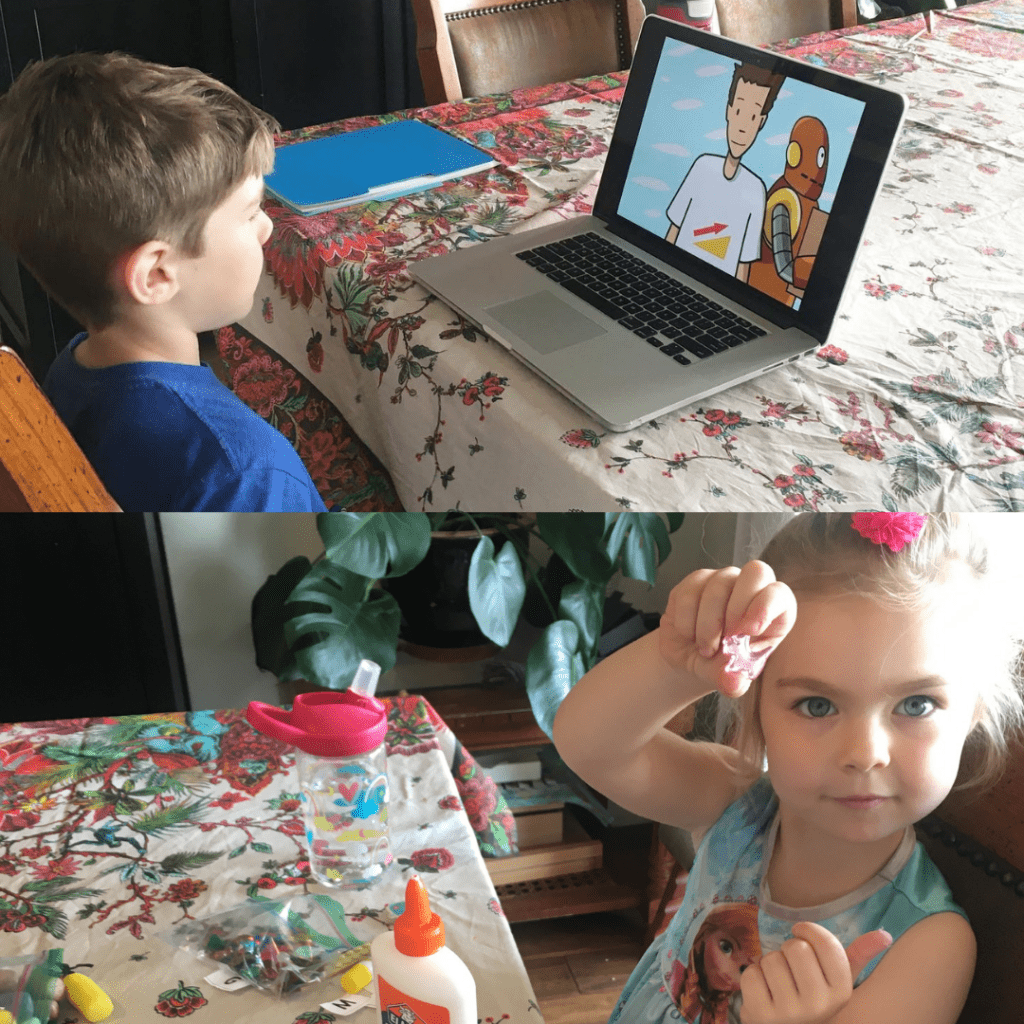 Since the pandemic began, women faculty with children reported their average daily research time has decreased one hour more than women faculty without children, according to an article in The Chronicle of Higher Education.

Tenured professors have the privilege to focus more on teaching and less on service and research. History Professor Loretta Hunnicutt — who has two 12-year-old daughters and one 14-year-old daughter — said she was only able to spend two weeks on her research last summer compared to her typical two months because she said it was not possible to concentrate with her kids at home.

“The fear that many women have is maybe there hasn’t been a mass exodus in female faculty from Pepperdine, but this strain and this burden on our careers and where we want to go with it is probably going to be sticking around a lot longer than there’s going to be concerted attention,” Vabulas said.

The three faculty members agreed that, although there is room for improvement, they are grateful for the support Pepperdine administration has provided during the pandemic, even if their resources are financially limited.

At the beginning of the pandemic, women faculty reached out to the administration expressing a need for more help, Vabulas said. The Seaver Faculty Survey for fall 2020 collected feedback about the challenges faculty faced.

The University repurposed travel grants to create dependent care grants, allowing faculty with dependents to apply for up to $500 to pay for dependent care, hire research assistants or rent Airbnbs to focus on research.

Vabulas said this policy, as well as government’s stimulus checks, demonstrate increased attention to the pandemic’s disproportionate impact on working mothers. She is still, however, concerned about the detrimental effects on her career.

Pepperdine’s Rank, Tenure and Promotion process, which provides faculty with economic and job security, now takes into consideration the impact of the pandemic on the productivity — a change many women faculty especially find to be a relief. Compared to working fathers, working mothers are twice as likely to worry that their performance is being judged negatively because of their child care responsibilities, according to The New York Times.

Due to COVID-19, Pepperdine also added an optional one-year extension to the six-year tenure clock. Vabulas, however, said because she became a professor later in life than most of her colleagues and is tenure-track, delaying tenure would minimize her lifetime earnings. This issue, Ledbetter said, is neither uncommon or gender neutral.

“There is a worry that that hiatus will have a negative impact on their ability to move forward with their career at the same pace as their male colleagues,” Ledbetter said. “Delaying one’s ability to earn at a higher level will have a compounding impact for her over the duration of her career — that is an absolute fact.”

Although she said she does not know whether more women than men are delaying tenure at Pepperdine, Ledbetter said when women struggle with job and economic insecurity or are underrepresented in leadership positions, the University and the economy are also weaker.

When given the option, 18% of women planned to extend their tenure clocks, compared to 14% of men, according to a summer 2020 professor-run survey in The Chronicle of Higher Education.

Hunnicutt and Carlsen, who both have tenure, said they feel fortunate the pandemic has occurred when they are more established in their careers.

“For women who are earlier on in their career track, it could be really devastating,” Hunnicutt said. “I think it’s important that we don’t always make it a choice between success and being a mother; I think that’s bad for our society.”

Expenses and the Economy

COVID-19 also presents working mothers with additional expenses. Vabulas and two other faculty families hired and shared a tutor for their children; they receive half as much child care as before the pandemic but are paying twice the amount, essentially making the cost four times higher. Vabaluas said she also spends more money on grocery delivery services to save time.

Other women faculty are also investing in activities to keep their children occupied while they teach. Hunnicutt bought her daughters new bikes to play outside, phones to keep in touch with friends and streaming services to stay entertained.

Carlsen said she remains optimistic that rather than striving to return to normal, society will strive to learn from the gender inequality the pandemic is highlighting, valuing the economic contributions of women.

“It’s been the hardest year of my life, but I hope and remain positive that we can move forward and grow and be stronger because of it,” Carlsen said. 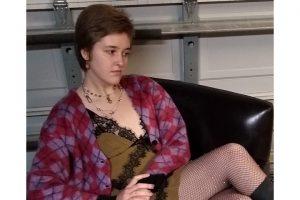 Sophomore Autumn Hardwick models her jewelry in her garage in February. Hardwick said she makes all of her jewelry by hand...
Copyright 2013 Jupiter Premium Magazine Theme
Back to top