West Coast Blues: Why the Pac-12 Won’t Have a Team in the College Football Playoff Once Again 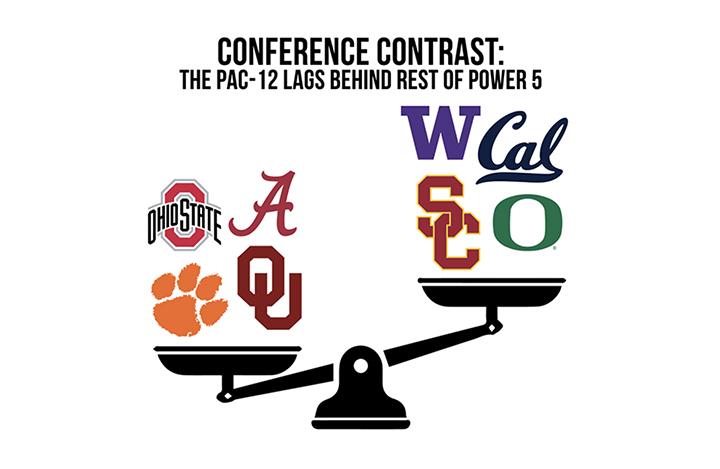 It’s been 1,006 days since the Pac-12 scored a point in the College Football Playoff. The Alabama Crimson Tide’s rout of the Washington Huskies on New Year’s Eve 2016 was the self-proclaimed Conference of Champions’ last taste of playing on college football’s biggest stage.

Despite having a handful of promising teams this season, the Pac-12, or collection of 12 Division I teams along the Western United States, will again be absent in the four-team race. Recruiting, coaching and failure to produce a frontrunner are the biggest reasons college football fans won’t see their favorite West Coast teams play against the powerhouses of the past few years. Here’s a look at a few of the top teams in the Pac-12 and some of their glaring problems.

Exhibit A: The USC Trojans

It’s not because J.T. Daniels got hurt. It’s not even because unknown-turned-overnight sensation Kedon Slovis got hurt. USC’s biggest problem comes from outside the field, and it’s Head Coach Clay Helton.

Helton has a 35-19 record at the university. Twenty of those wins were largely because of future first-round pick Sam Darnold, and Helton currently has a record of 8-9 since Darnold left the school with two years of eligibility remaining. It doesn’t help that his contract buyout is reportedly $15 million, meaning the university would have to swallow that if they fired him.

Right now the Trojans are 3-2 and down to their third-string quarterback after Daniels tore his ACL and meniscus in the season opener. After a masterful performance the following week vs. Stanford, Slovis suffered a concussion the week after that in the first quarter of the Utah game. That left the Trojans with one scholarship quarterback on the roster, redshirt junior Matt Fink.

Fink, in similar fashion to Slovis, was dazzling in his first real game experience as he beat an at the time 10th-ranked Utah team that was the conference’s best shot at making the playoff. Fink followed up the outing with a disappointing 28-14 loss versus Washington, where he threw two interceptions in the red zone.

With Slovis being cleared to return to non-contact practice this week and USC entering their bye week, the quarterback should be set to return Oct. 12 at Notre Dame, currently No. 9 in all of college football. Expect the Trojans to go 5-2 for the rest of the season, which is admirable, but it’ll be the loss to BYU that gives the Trojan faithful the biggest headache as it changed the landscape of the season far more than the injuries.

Exhibit B: The Oregon Ducks

USC’s biggest problem is one of Oregon’s biggest strengths — the head coach. Mario Cristobal has asserted himself as a force in the conference after going 9-4 in his first season. Perhaps Oregon’s biggest challenge this season was their first game of the season, a neutral site contest versus the Auburn Tigers. The Ducks lost on a last-minute touchdown after leading the entire game.

While Auburn has climbed from No. 16 to No. 7 in the country since then, they are not serious contenders in the SEC that boasts Alabama, Georgia and LSU. Why does this matter for Oregon? Because they lost to a team that will probably end up going 8-4 while the Ducks could compete for the Pac-12 Championship.

This creates an undeniably bad look for Oregon and the rest of the Pac-12, just like how Auburn beat Washington to start the season last year, only for the Tigers to finish 7-5 while the Huskies were a three-loss Pac-12 Champion. Winning the conference didn’t matter for the playoff selection committee because they couldn’t hold their water out of conference.

Oregon could be on the exact trajectory. They sit at No. 13 in the latest ranking, but they play the Cal Bears on Sunday and have two tough road games remaining on the schedule with Washington and USC. If they go undefeated for the rest of the year, they have a slight chance to make the playoff.

It seems extremely unlikely, considering Ohio State, Alabama, Georgia, Clemson and Oklahoma could all lose a game and still be voted in over the Ducks.

Exhibit C: The Cal Bears (and Their Short but Sweet Cinderella Story)

Cal was a team that almost nobody saw coming. They were unranked in the preseason and were down to UC Davis in the first quarter of their season opener. After beating Davis, they traveled to Washington, who was No. 14 in the country.

The night game kicked off at 7:30, suffered a weather delay for 2 1/2 hours, resumed at 10:30 and then ended around 1:30 a.m. The time wasn’t the most shocking part; it was how the Bears were able to beat the Huskies off a last-second field goal.

After beating Ole Miss two weeks later, they exploded into the rankings, landing at No. 15, and many analysts thought that they were a legitimate contender. The hype train stopped at the station Saturday vs. Arizona State, when starting quarterback Chase Garbers suffered an upper-body injury that will have him miss the rest of the season. Cal couldn’t hold off the Sun Devils, and their chances of winning the Pac-12 have vanished. It was fun while it lasted.

For Cal, beating Washington will be the highlight of their season. For Washington, losing to Cal might end up being unforgivable. Beating USC on Saturday is their only significant win. Their two biggest games the rest of the season are Oregon and Utah, and they’ll play both in their home stadium.

Aside from the one loss, Washington’s offense has been sensational. Georgia transfer quarterback Jacob Eason is completing 71% of his passes with 10 touchdowns and two interceptions. If they win out, their situation is the same as Oregon. They have a slight chance, and it’s only if one of the top five teams loses a shocking game.

Ultimately, the Pac-12 will not have a playoff contender in this year’s crop. It’s not because of an anti-Pac-12 agenda, or that the committee favors the Alabamas and Clemsons of the world. Their on-the-field product continues to be inferior, and until that’s corrected, the conference will continue to strive for the Rose Bowl, not the College Football Playoff. 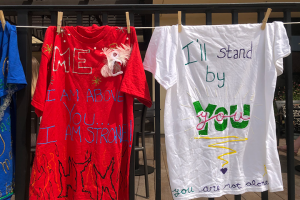 As the Pepperdine community has seen an increase in sexual assault reporting, an online survey of 45 students conducted...
Copyright 2013 Jupiter Premium Magazine Theme
Back to top