Transfermania is college basketball’s off-season, which officially starts April 12 and lasts until early October: the first time Division I college basketball teams can hold official practices. More than 700 college basketball players pack their bags and leave for one of the other 350 Division I schools, Division II schools or community colleges. When the dust settles, an average of two players per school transfer every year, according to ESPN’s Jeff Borzello and Jeff Goldman, and it’s already begun.

College basketball’s version free agency market is decidedly more lo-fi than its professional counterpart. NBA free agency is perfect for the modern media cycle. The stakes are high. News breaks around the clock. Journalists and fans alike even scour Twitter for any clues they can get — from checking players’ recent Twitter follows, to finding cryptic emoji tweets, to the grandfather of them all: one of Yahoo Sports NBA writer Adrian Wojanowski’s infamous “Woj bombs.” Fates of franchises — plus the league’s balance of power — are at stake.

Transfermania is almost none of these things. In fact, it’s a polarizing topic within basketball circles. Most recently, Sports Illustrated writer Pete Thamel attributed the decline of mid-major schools to transfers in his article “A free agent culture: How transfers are killing Cinderella,” published March 14. With this backlash and the NCAA’s rule requiring players to sit out a year after transferring, Transfermania is a strange exercise in delayed gratification. It’s not pretty, but it’s a degenerate sports fan’s oasis during the barren months of college basketball’s news cycle.

So what are the rules of Transfermania? Does everyone have to sit out if they transfer?

Like all things in the NCAA’s world, college basketball players who intend to transfer must comply with several rules. The NCAA’s transfer rules can be found on NCAAPublications.com. However, fishing through all the bylines and stipulations about how a multi-billion dollar, tax-exempt organization isn’t everyone’s cup of tea, so here’s a lo-fi flowchart instead: 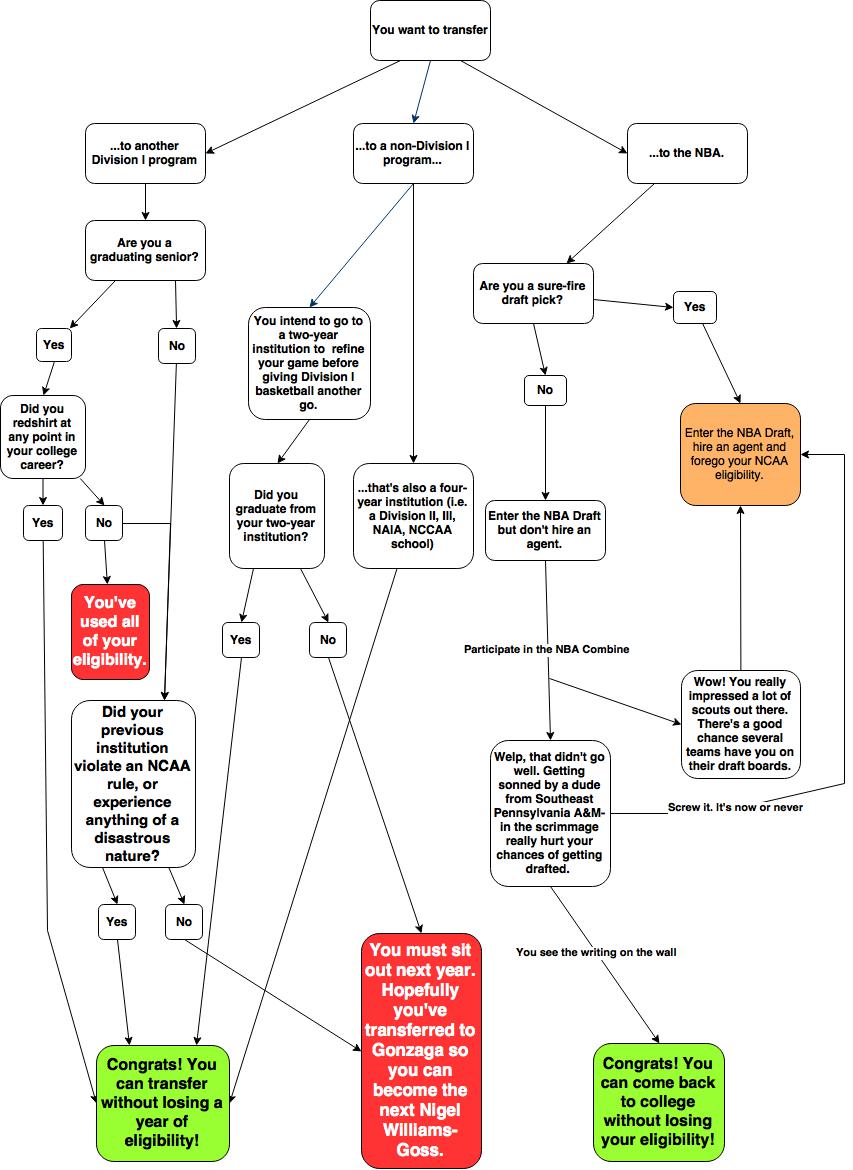 Arguably, the most important caveat to transferring is that players must sit out for a year after moving to a new institution. Exceptions are few and far between. Avoiding this mandatory year in college basketball purgatory is only feasible in drastic circumstances, such as an institution violating NCAA rules, or if an school suffers “extraordinary personnel losses from one or more of their intercollegiate athletics teams due to accident or illness of a disastrous nature,” according to byline 14.7.1.c of the NCAA Division I manual.

No reasonable human being — much less a college basketball fan — would want to see either of those scenarios happen just to sign a backup shooting guard.

Wait, remember how we had Chris Reyes for one season? How did that happen?

Reyes was a graduate transfer. He was granted a transfer waiver from Utah with the condition that he couldn’t transfer to any Pac-12 school, according to KSL.com writer Josh Furlong’s article “Reports: Chris Reyes, Isaiah Wright transferring from program,” published March 29, 2016. Part of the reasoning behind this was that Reyes graduated in the spring of 2016, and he would attend a post-graduate program at his new school.

Does this also explain why Eric Cooper, Jr. wasn’t able to play this past season?

Correct. Cooper transferred from Nevada after his sophomore year (sans any disastrous circumstances or NCAA violations committed by Nevada), so he had to burn his junior year of eligibility.

Gotcha. Has anyone transferred out of the WCC so far?

Ever since the WCC Tournament ended on March 7, 17 players have left WCC teams as of press time, according to Verbal Commits’ West Coast Conference page. Here are all 17 listed by school (with hyperlinks to their sports-reference.com pages):

BYU: junior forward Corbin Kaufusi (will be playing football for the Cougars)

Don’t hit the panic button yet. Yes, this list of departures seems rather daunting for the first month of the off-season. But to tell the truth, most of these players weren’t major contributors to their teams this season.

This isn’t to downplay any of these departing athletes: As someone who was once on a Division I team, it’s safe to say that all 16 players were important to the practices and culture of their respective teams in some way, shape or form. Calling these players “not major contributors” is merely a reflection of these players’ outputs during games. That’s it.

With that said: In layman’s terms, nine of these guys were benchwarmers and backups. Five these departing athletes played fewer than 10 percent of available minutes, which is less than four minutes per game, according to KenPom’s roster metrics. Three — Ferguson, Gehring and Maker — played around 12 to 16 percent of available possessions; given that the median Division I team plays 68 possessions per game, these players were on the court for about eight to 10 possessions per game, according to KenPom. That’s not a lot.

This leaves seven players who were established in their respective teams’ rotations. The following players were used on more than 16 percent of their team’s possessions last year, according to KenPom’s roster metrics: Bowles, Gonzalez, Hallinan, Johnson, Lampkin, LeCesne and Tutu.

Although Pepperdine fans might recognize Bowles’ name from the Waves’ first-round loss to Pacific in the WCC Tournament, Johnson’s departure might deserve the biggest headline. The sophomore guard recorded an effective field goal percentage of 50.9 percent while playing a whopping 88.9 percent of the Pilots’ minutes last season, according to KenPom’s metrics. Because of this, he made both the WCC’s all-conference Honorable Mention list, and the (lesser-known) Graphic’s Players to Watch list.

This also means that in the first year of the Terry Porter era, the Pilots have lost their top two scorers to graduation (Alec Wintering) and transferring (Johnson).

Woah, that’s a lot of transfers! Should I be concerned about the state of college basketball?

CBS Sports writer Jon Rothstein once called the transfer system an “epidemic” that was “directly related to the rise of Twitter” and college athletes transfer “due to the enjoyment they receive when their name is constantly posted across a social media platform,” according to his May 6 2016 article “Cal can be even more complete, dynamic in 2016-17.”

So uh, college coaches take note: Tweet about the team a lot so the players stick around.

Or don’t, because that’s an asinine theory.

Picture the scenario: One unpaid college basketball player is only given four years to refine his craft in order to become one of 60 people chosen in the NBA Draft. Say the school this player commits to out of high school and attends doesn’t end up being the best fit for his style of play, the coach has no idea what he’s doing, or the program is in disarray.

Wouldn’t it behoove this unnamed college athlete to leave for a better setting if they only had a four-year window — bold, underlined and italicized — to set themselves up for the rest of their lives, even if it meant sacrificing 25 percent of their already-small time of eligibility?

College athletes have such a small window to figure everything out compared to people who aren’t in their shoes. The same people who think there’s no such thing as a participation trophy probably overlook the fact that there’s also no such thing as getting an award for showing perseverance and staying true to one’s word by sticking it out on a terrible college basketball team.

Oh wait. There is. It’s called “getting paid in intangible values.”

Does anyone team have any incoming transfers yet?

Any sure things at this point are either transfers from last year (like Cooper), or players — like BYU freshman guard Zac Seljaas — who are returning from Latter-Day Saints missions in time for next season. For those keeping score at home, religious missions are another exception to the transfer rule.

What are a few of the roster moves that people should expect in the next few weeks?

Keep an eye on BYU. The Cougars have two big question marks to settle if they want to build on this season’s 22-12 record: Firstly, standout sophomore forward Eric Mika declared for the NBA Draft albeit without an agent. With Kaufusi on the gridiron, Mika’s absence can stunt the growth of BYU’s blossoming front court.

Speaking of high schoolers who haven’t signed their letters of intent, local product Ron Artest III’s lone offer is from Portland, according to Verbal Commits. Although he’s only listed as a two-star prospect, Artest has recently grown to 6’8″ and has inherited his father’s athleticism, according to Kendrick Johnson’s Vice Sports article “Like father, like son? How Ron Artest III finally came around to basketball,” published Aug. 25, 2016. He might not be the best prospect available, but the Pilots need players.

Lastly, if it means anything, people at BroncoHoops are very convinced that former All-Ivy League forward Henry Caruso will be transferring from Princeton to Santa Clara next season, which would be a huge get for Herb Sendek.

Perhaps Transfermania isn’t too different from NBA free agency after all.