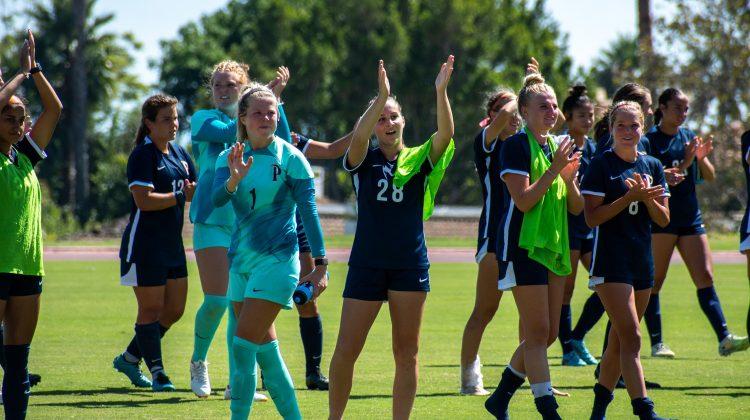 No.14 Women’s Soccer players clap for the crowd after their 4-0 victory against SDSU on Sunday, Aug. 28, in Malibu. Head Coach Tim Ward said he was delighted with the home crowd’s energy during the game. Photos by Brandon Rubsamen

After tying 2-2 against LSU on Aug. 25, No. 14 Women’s Soccer responded with a resounding 4-0 victory against San Diego State University on Sunday, Aug. 28, at Tari Frahm Rokus Field.

Four Waves found the back of the net Sunday — junior midfielder Tori Waldeck and freshman midfielder Tatum Wynalda netted goals in the first half, while senior midfielder Carlee Giammona and freshman defender Taylor Bloom added to Pepperdine’s tally in the second half. The Waves are 3-0-1 to start the season.

“We have a lot of depth on our team,” Bloom said. “We have 30 girls, and I promise any of them can come on the field and put the ball in the back of the net.”

Pepperdine dominated possession from the kickoff, but couldn’t translate that into clear chances initially. The Waves’ most dangerous opportunities in the opening minutes came from set pieces. In the 8th minute, senior midfielder Shelby Little won a free kick right outside the SDSU penalty area, but the Waves couldn’t capitalize on the opportunity.

SDSU had their own chance in the 13th minute through forward Denise Castro, who broke away from the Waves defense and rifled a shot toward goal. Pepperdine junior goalkeeper Ellie Sommers dove quickly to her right side to block the shot, and made the first of her five saves in the game.

Opportunities for the SDSU offense were few and far between. Hard work by the Waves backline limited the Aztecs to six shots, compared to the Waves’ 28. It was the Waves’ third clean sheet in four games to start the season.

“That just shows our team culture, our willingness to all defend,” Waldeck said. “No matter if you’re in the forward line, you’re back pressing.”

The Waves broke the deadlock in the 19th minute, courtesy of Waldeck. Assisted by junior defender Victoria Romero, the goal catalyzed an onslaught of Waves aggression, which never faltered until the end of the game.

Wynalda came off the bench and added the second goal of the day for Pepperdine in the 35th minute, netting a header off of a free kick from redshirt senior midfielder Trinity Watson.

The second half saw Pepperdine pile on more pressure. In the 62nd minute, sophomore midfielder Tabatha LaParl nicked the ball from a San Diego midfielder and drove up the pitch.

LaParl found redshirt senior forward Leyla McFarland on the left side of San Diego’s penalty area, who rolled a ball in the path of Giammona. The Aztec net rippled as Giammona claimed her third goal of the season.

“We’re connecting and understanding where each other are in the field, and then we’re playing with each other and for each other,” Waldeck said. “There’s so many times where there’s breakaways and someone who’s willing to put in that extra sprint, put their head down and run and get into the box.”

The Waves capitalized on a set piece in the 72nd minute, with Watson’s curling corner kick creating a scramble in the Aztec penalty area. Bloom, in the right place at the right time, dispatched a composed finish over the onrushing Aztec goalkeeper. It was Bloom’s first goal as a Wave.

“I was just shocked,” Bloom said. “Not shocked, but I was just so happy, like, ‘Oh my gosh my first goal!’ So that was pretty cool.”

From Sept. 1-15, the Waves will be on a five-game road trip. Up next is UC Santa Barbara on Sept. 1, followed by California on Sept. 4.

The mission for the Waves, Ward said, remains the same, whether the game is happening in Malibu or across the country.

“Different lights, different fans, different energy,” Ward said. “I think that’s the mark of a great team. Great teams find a way to go on the road and get results.”