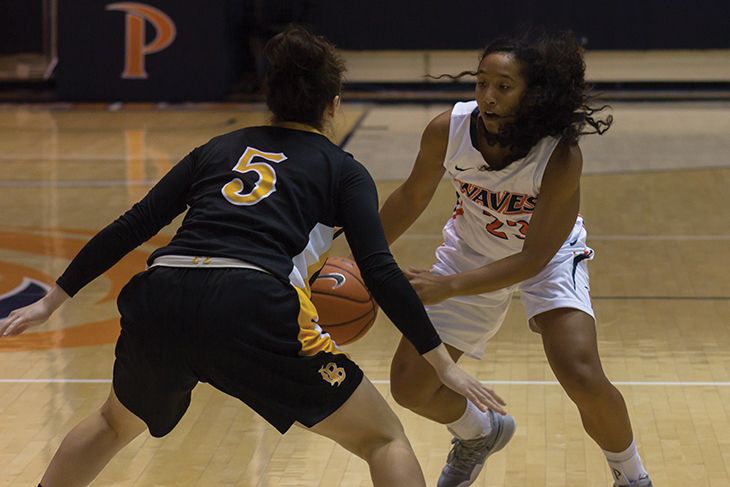 “It was a tough shooting game for us, but it was a learning process,” Head Coach Ryan Weisenberg said. “It’s just our second game together, first of the season, so we’ll just get back to work before Tuesday.”

Following a low scoring first quarter, Pepperdine jumped out to a 20-8 lead in the second behind Bordonaro’s hot shooting that keyed an 11-0 run. However, Long Beach State took an 11-0 run themselves to cut the Waves lead down to one 20-19 entering halftime.

In the 3rd quarter, both teams struggled to get their offense going in the early minutes, but Long Beach State took an 11-3 run to take a 30-24 lead midway through the quarter. Pepperdine trailed 30-26 by the end of the quarter.

Long Beach State extended the lead to 8 early on in the fourth quarter, but the Waves took a furious 9-1 run including a nice give-and-go from Bordonaro to freshman guard Barbara Sitanggan to cut the lead to one, 41-40. Sophomore guard Paige Fecske tied the game at 41-all with a minute left in the game. However, the 49ers hit three clutch free throws in the final seconds to clinch the victory over the Waves 44-41.

Neither team shot well from the free-throw line, as Pepperdine went 13-for-24 and Long Beach State went 11-for-30. The Waves shot 40 percent from the three-point line while limiting the 49ers to 14.3 percent. However, Long Beach State scored 16 second-chance points and had 25 points from the bench.

“I thought we battled back nicely at the end despite a tough offensive shooting performance,” senior guard Allie Green said. “We just need to work harder the next few days, watching and running through plays and get extra shots up and just get ready for Tuesday.”

Pepperdine will be back in action on Tuesday, Nov. 15 at UC Santa Barbara before returning home to take on Nevada Sunday, Nov. 20.

Image by Evelyn LeeEditor's note: The following section is a series of statements from Pepperdine professors and President...
Copyright 2013 Jupiter Premium Magazine Theme
Back to top