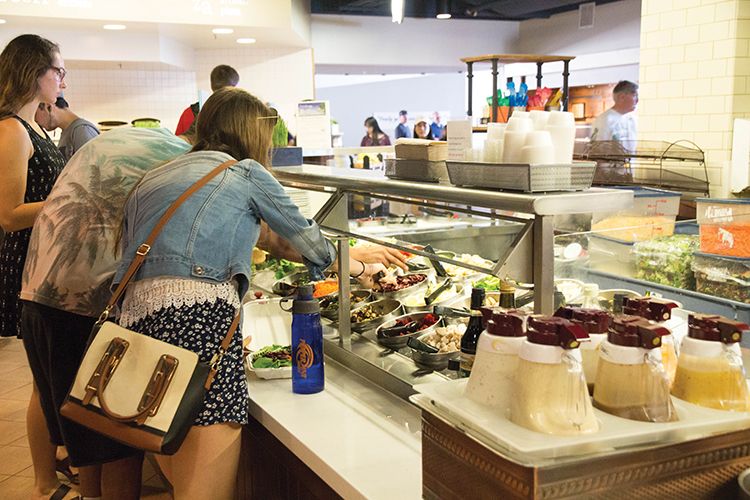 As students enter the Waves Cafe, they may notice more decorations hanging all around, a set up table, and the smells of spices wafting through the air. This is a part of a Sodexo initiative to spread awareness of cultural cuisine at least once per month, Pepperdine Sodexo Director of Operations Elizabeth Nepute said.

“It’s not about countries, it’s about culture,” Nepute said of the Waves Cafe current “Food Tours.”

One to two times per month, different campus groups are given the opportunity to showcase their cultural heritage through traditional cuisine. Working alongside Sodexo workers, groups plan out the dishes that best represent each club or organization’s own culture.

“We try to focus on authentic food from different regions based on an area of the world,” Nepute said.

Stacy Rothberg, the associate dean of Student Affairs for commuter and transfer students, works to organize when each group gets to present their food so that everyone has a chance to plan a dinner.

“I think the food tours are an excellent way to highlight the diversity of our campus and provide students with a cultural experience at home,” Janner said in a phone interview.

Nepute said that these themed dinners are good opportunities for students to be able to learn to try and enjoy new things.

“People are excited about their culture, and the best way to share is through food,” Nepute said.

Nepute said that a lot goes into planning these monthly dinners. She told us that the Sodexo team must first figure out what they are going to create, then order all of the ingredients, so they can make it from scratch ahead of time.

All this planning is necessary in order to ensure that all dishes are being accurately created and presented so that no one gets offended, Nepute said. For instance, “with Pad Thai, you shouldn’t use a spaghetti noodle. You need to use a rice noodle,” she said.

They also like to make sure no words are misspelled on the menus, which they finalize a week in advance of each dinner.

“It creates a lot of pride for the staff because they can showcase something they’ve done,” Nepute said about the dinners.

She shared an example from the Hispanic Heritage meal, when many of the Sodexo staff members “were making empanadas for two days, by hand.”

These meals are good to “bring people together, get conversations started, and do something fun,” Nepute said.

Some themed dinners Pepperdine has hosted in the past include Chinese New Year, African food for Black History Month, and a big Thanksgiving lunch and Christmas dinner the night of the tree lighting.