Water Wars: The fight for freshmen has begun 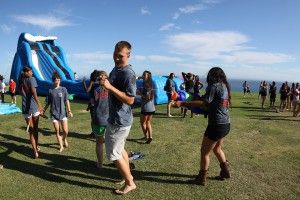 It’s that time of year again, when Greek groups fight for the creme de la creme of potential new members.  The season kicked off with Water Wars on Friday, Sept 7.

Not only did Greek affiliates meet and greet new students, but many also  reunited with their brothers and sisters after time abroad. Water Wars is one of the few events that begin to break the ice between the freshmen and potentially intimidating members.

Filled with water gun fights, water balloon madness, inflatable slides and free food, the event created an opportunity to get students involved with each other.  Even if some were not thinking about going through the Greek process, several had the opportunity to get to know students on campus and have an afternoon of fun.

As the event kicked off, Alumni Park was filled with a sea of cobalt shirts.  The Board and Greek members have sponsored this event for more than five years, trying to merge Greek and student life.

Initially, the fraternities and sororities gradually spread out across the area and mingled with others. Then the water guns appeared and numerous students were getting soaked and running for cover.  Finally, an all-out water balloon war erupted and the awkward silence was broken.

“It was a good opportunity to get to know the freshman class,” junior Kelsey Robertson said. “Because we haven’t been able to talk to them just yet or get a feel of what the class as a whole is like.”

As students made their way around the field, many others were soaking students with water guns and balloons.

For the few weeks leading up to Water Wars, Greek life had to keep conversation with non-members to a minimum, in order to create unbiased opinions of each group. Recruitment events will continue next week, with information nights for those interested in sororities, including free Malibu Yogurt, meet-and-greet sessions, and a smoothie night, where each sorority creates its own flavor.

Finally, Wednesday the 18th will kick off formal Recruitment or “Rush.”  Each potential new member will be placed in a group with others and have a Rho Chi as their mentor.  Fraternity events will occur around the same time period, but will be a completely different experience, with each group having specific theme nights of their own.

Water Wars was not advertised to its full extent, which led many students to be unaware of the event.  Pizza was leftover, rather than instantly disappearing, and numerous people were confused as to what the event was for.  Said senior Troy Shepard, “I think there could have been more publicity around campus, which was evident by the relatively low freshmen turnout.” Although the turnout wasn’t as monumental as in previous years, many students left having a little taste of the Greek life, and freshmen were able to interact with upperclassmen.

“O.M.G. I have two classes in the CCB.” “Dude, I have an 8 a.m. SAC class!” “Those stairs are killer!” “Understatement...
Copyright 2013 Jupiter Premium Magazine Theme
Back to top