Before Ronald Reagan became President of the United States in 1980, he provided the name recognition that launched what former president of Pepperdine William S. Banowsky terms the “Malibu miracle” in his 2010 autobiographical account, also titled “The Malibu Miracle,” regarding Pepperdine University’s move from West Los Angeles to Malibu, California in 1972.

In December 1972, a mere three months after the first students began school at Seaver College arrived in Malibu, California, Ronald Reagan, as quoted in “The Malibu Miracle,” exhorted students to appreciate the new Pepperdine campus in honor of the redwood tree he and Nancy Reagan planted on campus: “Let me say I have a strong proprietary interest in this new Malibu campus. For many years I’ve owned a ranch near here. I’ve ridden all over these hills above the campus. I hope you students will absorb the beauty and love of Malibu. It will never leave you.”

As part of the “Trees-for-Pepperdine” campaign, Reagan’s donation of a redwood tree and visit to the campus represented at least a two-year working relationship between the future president and the minds behind the move from the George Pepperdine College in West LA to the noteworthy and growing Pepperdine University in Malibu. Then-Pepperdine President William S. Banowsky, whom Reagan simply referred to as “Bill,” gives Reagan almost all of the credit for generating the public relations machine that placed Pepperdine squarely within the ranks of the California Republican Party.

He begins his chapter titled “The Reagan Revolution” with a few thought-provoking questions: “Was Pepperdine transformed by a supernatural spiritual phenomenon? Or by a calculated political operation? Was it an educational or an ideological achievement? Was it caused by God or Reagan?” Banowsky seems to think it was a little bit of both. Either way, Reagan’s contribution to the university that ranks No. 50, according to U.S. News & World Report today, is certainly undeniable. As Banowsky puts it, Pepperdine was “Reagan’s School.”

Reagan’s relationship with Pepperdine, however, began when George Pepperdine College was just beginning to consider multiple campuses. He spoke at the mandatory Monday chapel, the equivalent of today’s Wednesday Convocation, on March 18, 1963, a little more than one year before his groundbreaking speech for Sen. Barry Goldwater’s (R-Arizona) presidential campaign, “A Time For Choosing,” which is largely credited for priming him for the governorship of California, if not the Presidency. 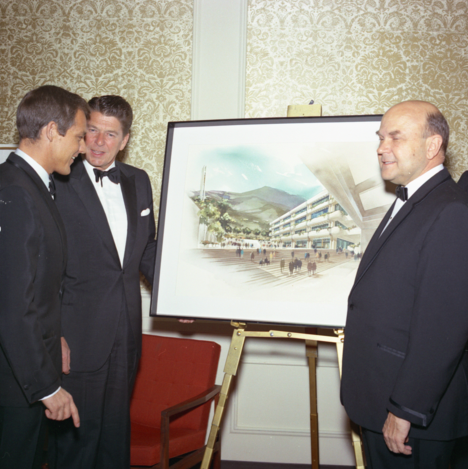 Banowsky was Dean of Students then, and remembers fondly the beginning of his friendship with “the Gipper,” one of Reagan’s nicknames. Several years passed until the public relations campaign that former Pepperdine President Norvel Young and Banowsky engineered to gain the momentum necessary to move to Malibu. According to Banowsky, what happened next has since been a part of Pepperdine lore, so much so that Lyn Nofziger, Reagan’s communications director both in Sacramento and Washington, D.C. and one-time professor of Political Science at Pepperdine University, exclaimed to his students in 1977, “Ronald Reagan is the patron saint of Pepperdine!”

Two years before the hillside looking over the Pacific Ocean was drilled into to make way for a seaside university, Reagan was working alongside Banowsky and Young to make the vision of an expanded Pepperdine a reality. Banowsky refers to Feb. 9, 1970 as the “birth” of Seaver College. An unexpected 3,400 people attended the unveiling of the educational vision and architectural plans for the new Malibu campus that day, overflowing the Century Plaza Hotel and spilling over into the Beverly Hilton.

As keynote speaker of the event, Reagan — by then governor of California for three years — drew the conservative crowd that both Pepperdine and its allied Republicans wanted. Indeed, Pepperdine had been carefully cultivating its conservative image since well before Reagan left Hollywood. Beginning in 1959, Young made efforts to generate positive publicity among the conservative population in California by launching the George Pepperdine College Freedom Forum, an annual lecture series regarding conservative American economic ideals and the ever-present threat of communism. The Freedom Forum lasted until 1971, adding critical conservative members into Pepperdine’s ranks, including Goldwater and, of course, Reagan.

For Banowsky, however, his alliance with the soon-to-be golden child of California Republicans moved beyond the scope of Pepperdine. By 1972, he was presented on television by the Reagans as the California chairman for former President Richard Nixon’s re-election. In 1973, he was appointed chairman of the “Governor Reagan Appreciation Dinner,” and by 1976 he was considered among Reagan’s “best friends” willing to help Reagan do the unthinkable: run against the incumbent of his own party, Gerald Ford.

The miscommunication between Banowsky and Reagan over the 1976 election resulted in a severely weakened friendship and at least four years without contact. Banowsky said in “The Malibu Miracle” that he did not pick up on Reagan’s signals that he wanted the support of Pepperdine in his unprecedented challenge to Ford, and so Pepperdine offered support to Ford’s campaign in May 1975. That night, Banowsky said Reagan called asking for support in the election, encouraging him to publicly state that he was a “Reagan man.”

The misunderstanding between both men certainly ended the explicit support Pepperdine had been enjoying from Reagan since at least 1970, but Reagan’s role in the “Malibu Miracle” had been sealed.

Not all Seaver College students were enthusiastic about the Reagan contribution, however. Particularly in 1973, the Graphic ran some highly critical pieces on Pepperdine’s fundraising efforts and alliances, referring to Banowsky’s televised appointment as the California Chairman for the Reelection of Richard Nixon the “Pepp Watergate.”

Bob Eisberg, then-editor-in-chief of the Graphic, wrote in 1973: “Pepperdine has become the darling of the conservative wing of the GOP. The word ‘independent’ should be stricken from Pepperdine’s self-description as an ‘independent, liberal arts, Christian college.’” Citing Banowsky’s public association with Nixon, Vice President Spiro Agnew and Governor Ronald Reagan, Eisberg lamented Pepperdine’s entanglement in American politics, especially with a party that had just witnessed corruption in the White House like no other.

Banowsky —whether or not he was serious in his question of whether God or Reagan played the most important role in the expansion of Pepperdine’s vision by the sea — brings up an important point about the political and religious heritage of Pepperdine, and how seamlessly merged the two often were. Regardless of political affiliation, even in such politically polarized times such as these, Reagan’s contribution to Pepperdine University is undeniable. As students, faculty, and staff, we owe a debt to “the Gipper.”