LA is one of the greatest metropolitan cities in the United States. Residents and travelers of the City of Angels are privy to a treasure trove of opportunities to explore and experience that keep LA an incredibly lively locale. 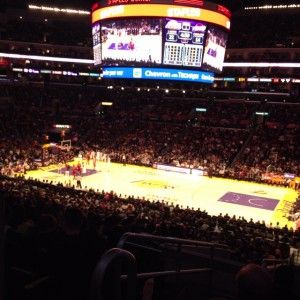 One of the Staples Center’s home teams, the LA Lakers, take on the Cleveland Cavaliers. The Lakers pulled out a win on Sunday, Jan. 13.

With millions of different activities to experience, it can be overwhelming to decide what to do with your time in LA. However, some of the most exciting events are things you can easily watch on TV. But just because you can catch a Lakers game on ESPN or a Kings hockey match on cable doesn’t mean you shouldn’t take the opportunity to watch a game in the flesh.

LA has an incredibly unique sports culture that really makes the professional and collegiate sports of the city an experience. With a myraid of athletic teams playing year round, it won’t be difficult to find an event to fit your schedule and have you sporting foam fingers and losing your voice chanting with thousands of sports fans.

The Staples Center is one of the most exciting and notable venues in the LA sports circuit. It houses three popular sports teams of the now — the NBA’s Lakers and Clippers and the NHL’s Kings. Lakers and Clippers fans are some of the most rambunctious and energetic fans in the sports world. Experiencing a basketball game at the Staples Center is nothing short of astonishing. From the very stocked merchandise shop, the array of food and drink possibilities and the realization that you’re able to witness some of the greatest legacies of the sports world, the Staples Center is one of the best places to catch a game. Lakers and Clippers fans also make for an unforgettable experience because their passion is palpable. These fans would bleed for their teams and aren’t afraid to yell about it.

If basketball is not your thing or you’re looking for something else, check out a LA Kings game. The Kings have finally decorated the Staples Center with a banner of their own, and this season looks to bring new fan fervor to the Staples Center — the Kings won last year’s Stanley Cup, after all. With a strong momentum pushing the hockey team forward and the glittering Stanley Cup on display for all to see, the Staples Center will be the place to watch the team (hopefully) secure another run to the championships.

Venturing away from the great Staples Center, soccer fans young and old can travel to the Home Depot Center in Carson, Calif. to catch an LA Galaxy game. Just because David Beckham doesn’t play on the team anymore doesn’t mean you shouldn’t check out Team USA captain Landon Donovan and the rest of the Galaxy players. If you’ve ever wanted to live out a European soccer fantasy, the Home Depot Center is the place to do just that. The sport might not be as prominent here as it is over the pond, but catching a match on the pitch and sporting the blue and yellow of the Galaxy will make any weekend adventure fun.

With so many strong professional sports in the city, you’d think it would be easy to forget about collegiate sports. But with Division I schools UCLA and USC calling the City of Angels their home, collegiate sports are never overlooked. Whether you want to check out a football game, basketball game or anything in between, these formidable universities offer it all. Once again fan culture will make whatever sports event you attend more than a spectator sport — it becomes an experience, where you most likely will get sucked in by the face paint and the chanting exploding around whatever field, arena or court you decide to visit.

With an abundance of sports teams filling out the LA landscape, there is never a dull moment in the sports world of the city. The LA sports culture is thrilling and unique, and if an opportunity to catch a game presents itself, grab the moment, enjoy the experience and become a LA fan for the day.

After a bittersweet week of wins and losses, the Waves face big competition in upcoming conference play. Sports to look...
Copyright 2013 Jupiter Premium Magazine Theme
Back to top