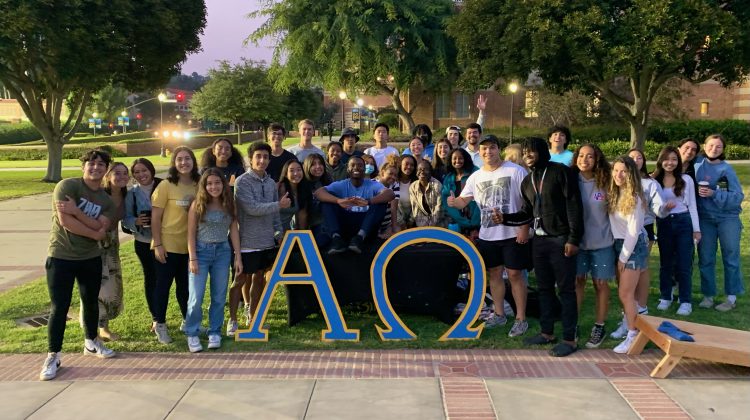 Members of the Alpha Omega student ministry gather at UCLA for the annual Alpha Omega Fall Retreat on Sept. 24, 2021. AO connected senior Grant Lee to the Pepperdine community and his faith since he was a first-year student at Pepperdine. Photo courtesy of Grant Lee

Without a Convocation requirement anymore, Pepperdine’s upper-level students explore their faith on campus on their own. Some said they turned to the new Hub for Spiritual Life or student-led ministries to strengthen their faith, while others said they find it difficult to get involved.

Being inspired to carry faith-based activities on their own into post-college life is a goal the Hub has for students, and the main reason the University dropped the Convocation requirement, Associate Chaplain Rachel Collins said.

“We really wanted to create a system where the program was more developmental,” Collins said. “So, once students get to their junior and senior year, they can start to practice using that muscle and say, ‘Where do I really want to engage with my faith and how do I want to do that?’ Then, when they graduate, it is not the first time they’ve ever thought of that.”

The Impact of Convocation

“I would rather a student encounter that feeling now, when they have more support and more people on campus that are really rooting for their spiritual development,” Collins said. “Really wrestle with that a little bit and go, ‘Well, I was required to do this and so I was forced to put it into my schedule, so what is holding me back from recreating that same level of motivation in a positive way?’”

Upper-level students said the Convocation requirement had varying effects on their faith. Junior Mharie Brigham, vice president of events for the Catholic Student Association, said Convocation never appealed to her, but it never bothered her either.

“Convo was just a requirement — I just had to get the credits,” Brigham said. “So I went to the surf convo one for a while, and I went to the Friday celebration ones. But I wouldn’t say that it really had any impact on my faith, so I looked for that elsewhere. Now, CSA plays a big part in my life.”

Because she is Catholic, Brigham said Convocation was not geared toward her beliefs. Still, Brigham understood that she chose to attend a Church of Christ University, so she sees the perspectives of both those who support it and those who do not.

“I would say in general, Convo seemed like more of a reinforcement of something rather than inspiring faith,” Brigham said.

With or without Convocation, Brigham said her faith will be a priority in her life forever.

“I guess my faith is in a place where it’s something that I am going to be seeking out, regardless of whether it’s a requirement or not,” Brigham said. “It doesn’t feel like I’m ticking boxes or anything at this point.”

Senior Grant Lee said at first, he dreaded the weekly Convocation requirement because he did not see how it could strengthen his personal relationship with God. After the first few months, however, he said he became more open and his faith benefited from the weekly gathering.

“After having one semester of college under my belt and talking to people and really growing in my faith, I realized that there are a lot of things that people can share,” Lee said. “So I started to pay a little bit more attention.”

Without being involved in any faith-based organizations on campus, junior Serah Hodson said she appreciated having the Convocation requirement as an easy way to fit her faith into her schedule.

“Celebration Chapel was through the University for Convo credit,” Hodson said. “That one felt really important. It was good because my faith background at home is that the services have always been very worship-centered — and that’s what Celebration Chapel was. So that was very valuable.”

Celebration Chapel still takes place every Wednesday as a Seaver 200 breakout group, and although upper-level students do not receive credit for it, anyone can attend.

Hodson said her time participating in Convocation was cut short due to the pandemic, and she has since realized how difficult it is to be in-person and connect with on-campus faith opportunities amid her busy schedule.

“As a junior, it is really weird to be on campus and to not have required Convo,” Hodson said. “I don’t know how I feel about it because on the one hand, I love not having requirements — I was required to do something before and now I’m not so that’s always cool. But on the other hand, I’m realizing how much discipline I don’t have in not being required to go to something every week. I’m having to do more on my own end.”

Since classes have returned in-person, Hodson said she has not engaged in her faith through on-campus opportunities, and she does not regularly attend a church. Part of this is because she does not have much time in her academic schedule, but she also does not have the motivation to make time, Hodson said.

Hodson said she thought about joining a student ministry, but she does not feel drawn to spend her time in that way.

“On-campus ministries and faith related opportunities, in my experience, are sometimes a good way to build community or to meet people, but they don’t feel very beneficial to my personal faith,” Hodson said. “It’s really cool to do things with other people in a faith-related community, but it doesn’t feel like it has a lot to do with my relationship to God.”

For students not interested in group settings to discuss their faith, the Hub provides personal opportunities and resources for spiritual growth as well, Collins said.

“We have had requests from juniors and seniors for spiritual mentoring,” Collins said. “I think when you’re in your third or fourth year of college and starting to think about what is happening after college, it is a really great time to engage one-on-one with a faculty or staff member who is a little bit older and can help walk you through your spiritual formation process.”

Since her first-year at Pepperdine, Brigham said CSA has been her way of connecting with her faith on campus, and she hopes there is a Catholic-focused breakout group for the new Seaver 200 program for first and second-year students where they can explore beyond the Church of Christ.

The Hub has also been a new resource Brigham said she is incredibly grateful for.

“I’ve really had a very positive experience with the Spiritual Hub,” Brigham said. “I feel like faith at Pepperdine can be something very intimidating for some people, so I would say that the Hub is a good place to start.”

The intention of the Hub is to be a source for any students who want to ask questions, have discussions or who are doubting their faith, Collins said. The team of chaplains, she said, are open to listening to anything students have to say and hope to be of service in a multitude of ways.

“We get students for, normally, four years — sometimes more, sometimes less,” Collins said. “We are not it for students, we are just this one little segment, but we want to be as intentional as possible to help students have that spiritual formation while they are here.”

Lee is part of Alpha Omega, a campus ministry, and he said it has had the largest impact on his faith since returning and the Convocation requirement being dropped. Lee said he feels a sense of family and mentorship at AO that has kept him wanting to seek out a deeper relationship with God at Pepperdine.

“The way that I have personally been able to grow in my faith and continue to connect in a way that was, in a way, forced my freshman year, is to have this active desire —an active choice — to want to stay connected with these groups,” Lee said.

Since coming to Pepperdine, Lee said the University has provided him with an environment that encourages him to engage with his faith, which has been life-changing, he said.

“Being able to connect with everyone in the Hub for Spiritual Life has been super eye-opening, because there’s so many people with different backgrounds of their faith, but they all are under the same God — under the same religion of Christianity,” Lee said. “To be able to explore that and talk to people about what they believe in and continue to educate myself about all of Christianity has been something that has really helped me.”

Collins said she has seen more engagement with faith from upper-level students since May. Juniors and seniors lead most student ministries, and events like The Table and The Well have a high turnout, she said.

The students who are engaged with their faith on and off campus during their final years of college are those who are most equipped to enter a faith-focused life after graduating, Collins said. With the stepping stones Pepperdine provides for all students, she hopes everyone feels prepared to hold faith in their lives in whatever capacity they choose.

“Once that desire has been cultivated, students have confidence they can continue their faith journey off campus,” Collins said.