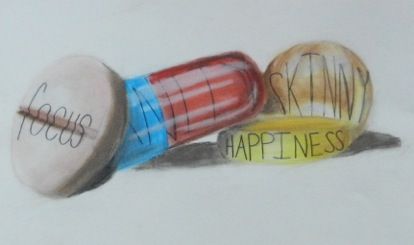 I was diagnosed with ADHD right before my 20th birthday during my sophomore year at Pepperdine. Since then, I have been adjusting my life, trying to accommodate for the things I now realize are not my personality but a part of a deficit in my brain. I keep my planner updated religiously, I set reminders in my phone and I drink a lot of caffeine to stay focused. This year, I have one class that preys on the biggest deficit in my brain: my working memory. This year may be the first that I have to consider the possibility of using drugs like Adderall or Ritalin to be successful in school. This year may be the year I face the difficulty of getting the help I need because of the high rate of study drug abuse on college campuses.

According to the National institute on Drug Abuse, every year around exam time, study drug sales spike on college campuses everywhere. It seems as though abuse of these drugs has become almost an accepted part of the college experience; but for those of us who have ADHD, the increase in the sale of study drugs is quickly becoming a nightmare. Many people don’t realize what a long and arduous process getting study drugs legally can be.

For people who may need those drugs, the first step is a diagnosis. I began to question if the struggle I was dealing with during second semester of my freshman year at Pepperdine might be more than just adjusting to college. First, I went to the Counseling Center, where I eventually received a list of names of psychiatrists who specialize in testing for learning disabilities.

By this time I was nearing the end of the semester, and I would be returning home soon, so I made an appointment for the earliest time available once I was back in California, Oct. 12 and 19. After two days of testing, the results were in — I had ADHD-C. The C in ADHD means that I have combined type ADHD presenting with both mental (inattentive, daydreaming) and physical (bouncing leg, fidgeting) aspects of ADHD. In total, I spent nine months and around $1,800 just to get diagnosed.

Furthermore, if I decide that I want the medication, I must first find a psychiatrist who deals with learning disabilities. Then I must convince him or her that the psychologist tested me correctly and that my symptoms are severe enough to warrant switching to medication. Many doctors dislike giving prescriptions for study drugs due to high abuse rates, as well as the fact that study drugs lose their effectiveness over the long term, and usually their dosage must be increased. It may seem that the doctors are being overly suspicious, but a study titled “Illicit use of prescription ADHD medications on a college campus: a multi methodological approach,” published by the Journal of American College Health in November 2008, showed that of the 1,811 students surveyed, 34 percent willingly admitted to the illegal use of ADHD stimulants.

In my official diagnosis from the psychologist, it actually says the drugs should be the very last line of defense. Even if I convince them that I have tried every study method and organizational system available, I am then looking at monthly appointments to figure out which drug is correct for me and to check that I am not abusing the medication. Those costs can be anywhere from $50 to $200 per visit, not including the medication.

So you can see why, when I look at Yik Yak around exam time and see people asking, “Who’s got Adderall to sell?” I might be a little upset. Every pill sold illegally is another step added to the frustratingly long and insanely expensive process for those of us who need it. It increases the chances of the medication becoming an even more controlled substance than it already is. According to CBS New York’s article “Seen At 11: Colleges, Universities Crack Down On ‘Study Drugs’” published on June 25, 2013, campuses across the country have stopped allowing their counseling centers to prescribe study drugs, and others are requiring contracts with clauses for drug testing.

As I approach the first year I may actually need these drugs, I am terrified of the cost of the medication, the process of getting them and the stigma that comes with using them. I am not the type of person who seems to need this kind of help, which only makes the process more uncomfortable. There is nothing fun about the possibility of having to take drugs to be normal.

Please think before you abuse study drugs. They will never give me an advantage over you in a class; they can only fix the deficits that exist in my brain. Every time you buy them, I face more stigma that my learning disability doesn’t exist, and more money has to be put toward proving that I need them. I shouldn’t have to fight for the help I need.