Voting for Donald Trump is a privilege I, unfortunately, do not have as a Black person here in the United States.

I don’t have the privilege to be blind to the social injustices taking place in the world because I encounter them every time I walk out the door. As an ethnic minority, I am afraid for the results of this election. I am afraid of what is going to become of my peers if Donald Trump becomes the President of the United States.

Prior to this election, racism in the United States was reticent, but as this election has progressed, ethnic minorities have been exposed to more blatant racism. During this election Muslims, Blacks and Hispanics have faced constant discrimination and physical assault on numerous occasions, because of Donald Trump.

Late last year, Trump revealed how he believes that anyone coming into the country of Islamic faith must be considered a potential threat, as reported by Tessa Berenson in her article, “Donald Trump Calls For ‘Complete Shutdown’ of Muslim Entry to U.S.” published Dec. 7, 2015, by TIME. Trump has also ignored the physical abuse that has left several Black protesters victimized by his rally goers, allowing one protester to be beaten and choked after disrupting a rally, and condones this behavior, according to Michael Miller’s article titled “Donald Trump on a Protester: ‘I’d like to punch him in the face,’” published Feb. 23, 2016, by The Washington Post.

Trump has labeled Mexican immigrants “rapists” and “drug dealers” and continues to advocate for the construction of a “wall” in order to solve illegal immigration, according to Tessa Stuart’s article, “Donald ‘Mexicans Are Rapists’ Trump Goes to Mexico,” published Aug. 31, 2016 by Rolling Stone. These offensive comments by Donald Trump just don’t affect minorities, but also the allies of minorities.

Pepperdine University as a whole is ranked number 11 in racial diversity, according to a study done by Priceconomics Data Studio titled “Ranking the Most (and Least) Diverse Colleges in America” published July 12 , 2016. This study implies that almost every student here at Pepperdine knows someone who is directly affected by these comments. Many students have racially ethnic friends they care dearly for, so why support a man that promotes such discriminatory behavior towards ethnic minorities?

Now, what does it mean to “make America great again?” Make America great again in relation to the 1960s, when Black people had to protest to eat inside of a desired restaurant? Or maybe in the 1950s before Hispanics and others racial minorities, besides Blacks, didn’t have protection under the 14th Amendment until 1954 with the case of Hernandez vs. Texas according to Nicholas Dauphine’s article published May 13, 2014 for Education Week?

Even though there has been some movement forward there is still a long way to go. According to Niraj Chokshi’s article, “Poverty Report: Working Minority Families Lag Behind White Ones in Every State”, published May 16, 2015 by The Washington Post, ethnic minorities have greatly still fallen behind Whites in wealth and education here in the United States because of lack of proper resources. How is America supposed to be made great again while half of the population still lag behind?

White people must also recognize their privilege. White privilege is the phenomenon that having “white” skin in the United States opens many doors or opportunities that are often closed off to ethnic minorities, according to Peggy McIntosh, an anti-racism activist, in her article “White Privilege: Unpacking the Invisible Knapsack” published in 1989 by the Women’s International League for Peace and Freedom. Change can’t occur if someone is unable to identify their privilege in society over minorities.

As this election day quickly approaches, I want everyone to think carefully while casting their vote. What kind of America do you want to see? One in which everyone has equality, or one in which half of the population is treated like second class citizens? The decision is solely yours. 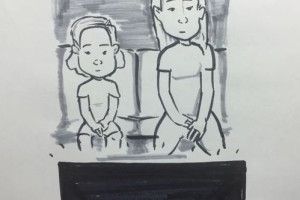 Art by Peau Porotesano I can't remember which episode was playing on the TV when I received my acceptance to Pepperdine....
Copyright 2018 Pepperdine Graphic
Back to top