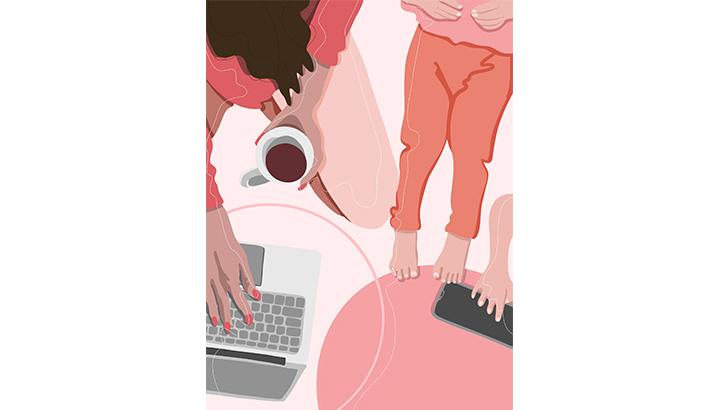 There are countless paths that women can venture down throughout a lifetime — motherhood, career, volunteering, traveling, learning, the list goes on. But despite this freedom, there comes a pressure to be checking off certain boxes.

Even though women make up almost half of the current workforce, 77% of Americans say that women face high pressure to be an involved parent (versus 49% of men), according to Pew Research Center.

A Currents survey of 221 students found that 67% of women and 59% of men said both their careers and parenthood were equally important to them. In opposition to social norms, more men said parenthood was more important than career (16% to 4%), and more women placed career first (29% to 25%).

Women in the Pepperdine community continue to overcome societal expectations and follow the path that suits them best. As no one is defined by a single role, these women shared three words they would use to describe themselves, along with their stories and advice.

“It was sexist inherently because they didn’t hire the wife; they hired me,” Miller-Perrin said.

Miller-Perrin and her husband Robin Perrin, who teaches sociology, both started their Pepperdine careers in 1992, when two positions in the Social Science Division opened up. At the time, Miller-Perrin was one of two women in the division and the only woman with a young child.

They had their second baby a few years into their careers, when Pepperdine did not offer family leave.

Twenty-eight years later, the university offers a full semester of family leave, and Miller-Perrin said she tries to be proactive in her support of female faculty members and faculty with young children.

“It’s about changing attitudes about women and about marriage and about parenting — so that it’s not the woman’s problem,” Miller-Perrin said.

Throughout her time at Pepperdine, Miller-Perrin said she has experienced double standards that her husband has not, such as being judged for baby toys in her office or being questioned about who was watching her children.

“When I brought the baby to my office, I was criticized because I wasn’t professional,” Miller-Perrin said. “But when [my husband] brought Maddie to the office, he was praised as this wonderful father who spent time with his daughter — he’s a hero because he’s willing to share the load.”

Miller-Perrin said she and Perrin have an egalitarian relationship, both in terms of working and taking care of their children.

“But still — he would even say this — I do a little bit more,” she said, smiling.

It was only about a month before starting her freshman year at Pepperdine when now-junior business administration major Alexsia Aguilar found out she was seven months pregnant.

“I didn’t really have any signs beforehand, so it was a big shock,” Aguilar said. “When I found out, I was like, ‘What am I going to do?’”

With support from her family and her desire to attend university, Aguilar reapplied to Pepperdine for the spring semester. She was accepted and has been raising her daughter, Malaina, while attending classes ever since.

“Even though I was having this blessing, I didn’t want that to keep me from going to my dream school,” Aguilar said. “I thought that I was going to go through school and have time to kind of figure out my life before I had a child — but I always wanted to be a mom.”

Although Aguilar said she would not trade being a mother for anything, there have been times when she felt like she could not do it. Yet, it was her daughter who kept her motivated.

“I just think of graduation — being able to walk across the stage and have my daughter say, ‘That’s my mom,'” Aguilar said. “I know that what I am doing is not only benefitting me, but it’s benefitting her.”

Krista Lucas is frequently asked how she is able to balance everything, being a biology professor, third-year Ph.D. student, mother of two and wife to Timothy Lucas, a mathematics professor.

“I hear it all the time actually,” Lucas laughed. “Whereas with my husband, I don’t think he’s ever been asked that.”

Lucas said she loves being a mom of boys because it allows her to show them what women are capable of while teaching them that they can do or be whatever they aspire to.

With her students, Lucas said she often hears them say they are unsure of what they want to do after graduation.

This was advice that Lucas first received when she was a young mother. It encouraged her to follow her own timeline rather than societal expectations for women.

“You really can do it all,” Lucas said. “But you don’t have to feel the pressure to do it all at once.”

A working woman since she graduated Pepperdine in 1998, accounting regulator Amy Doran said she has always been the bigger ‘breadwinner’ of the household — making her part of the 37% of women who out-earn their partners, according to Refinery29.

Doran found her way back to the university around 2009, when her husband Chris Doran, a religion professor, started teaching. At that same time, Doran began her role as the advisory team chair for Delta Gamma (DG), the same sorority she founded at Pepperdine during her college years. She served in this role until 2019, when she became a regional adviser for DG.

“Those were my girls; those were [Chris Doran’s] girls — his students,” Doran said. “They are the ones that we have poured ourselves into, and there are relationships that we have been able to make because we don’t have kids. DG has been this huge piece of my soul.”

As the couple’s relationship matured, the two realized that having their own children was not something they wanted. Yet, Doran’s career, DG leadership and personal happiness do not stop others from pestering her about children.

“People will say, ‘Oh, but you don’t know how much [children] complete you,’” Doran said. “I am not incomplete. I am not lacking for love.”

As a woman who has overcome certain prejudices, Doran said individuals should not let others influence their path.

“Just work hard and be who you are,” Doran said. “I am happier being who I am than I am trying to be who somebody thinks I should be.”