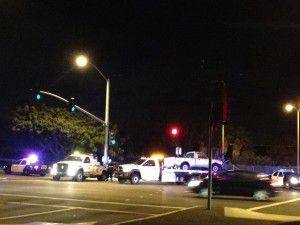 A crash involving two cars occurred at the Malibu Canyon Road and Civic Center Way intersection in front of Pepperdine at 7 p.m., according to Malibu Patch.

The Lost Hills/Malibu Sheriff’s Station reported the accident to have been a head-on collision. Firefighters arrived on the scene to help free one of the people involved in the crash.

One person is reported to have been injured in the collision. More information will be updated as it becomes available.