This film is a perfect example of why I never rely on film critics opinions of films. Everything I heard before seeing this film had me thinking I was definitely walking into a stinker, but as the previews passed and the opening credits rolled “This Means War” actually turned out to exceed all my expectations. In retrospect, I’m kind of glad the critics hated it because it caught me totally off guard and made it that much more enjoyable. 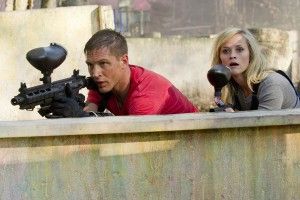 “This Means War” tells the story of two best friend CIA agents (Tom Hardy and Chris Pine) who accidently fall in love with the same girl, Lauren Scott (Reese Witherspoon). After discovering their mutual love, instead of giving the girl up in order to salvage their friendship, the two pull out all the shots in order to win their girl over. We have all seen the action romantic comedy genre done well in the past with movies like “Mr. and Mrs. Smith” and we have also seen them fall terribly flat like in the case of the Tom Cruise/Cameron Diaz flop “Knight and Day.” “This Means War” definitely goes over the top with its un-believability and forced dialogue, but that is half the appeal. Aside from a few snickers and grins now and then, I rarely find myself uncontrollably laughing in a comedy. But this film had me laughing many times throughout.

The pace and structure of the film was so predictable it was funny, which made the film relaxing and fun to watch. It doesn’t take any extra brainpower because it is so cleanly laid out in front of you. All the viewer needs to do is sit back, relax and enjoy. This approach to structuring the film relies on the performances of the actors and comedy within. Luckily both were done beautifully. The two main leading men, while playing totally opposite simple character archetypes, have great chemistry between them, which makes the shots and comments they make at each other so much more relatable and satisfyingly funny. Most people wouldn’t peg Tom Hardy for a romantic comedy lead yet his seriousness and total devotion to the performance makes him likable. I was weary of Pine before the film, but what you get is a very mature take on a very immature character, which was very refreshing to see, and as always Reese Witherspoon delivers a quirky, yet still sexy leading performance. One thing I was not expecting was the “best friend” played by the comedian Chelsea Handler. While it was obvious she was not an “actress,” her foul-mouthed, sex-crazed comments were delivered perfectly and made for some of the funniest moments in the film. One thing that was upsetting was the end of the film. It was inevitable that the end would be off-putting because of the fact only one man can get the girl. Despite that built-in structure flaw, the film deals with it very gracefully, which helps soften the blow of your favorite guy not winning in the end.

Although the film basically revolves around two sexy dudes doing sexy spy things, which most women will eat up, guys will love the bromance in this film as well. There is something really satisfying about witnessing the camaraderie between teammates, and guys will love the action and brotherly love story told in this film. 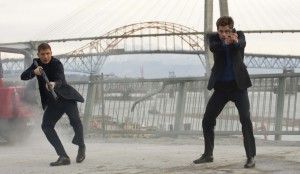 Pine and Hardy’s chemistry makes you believe they could be friends in real life. Their performances in scenes with each other are very relaxed and genuine. Although every scene was flashy and popped like a music video, McG’s directing comes across as very commercial with no real voice or uniqueness. Thankfully that aspect of the directing plays up the action and comedy and the film did not suffer because of it.

This film is not perfect, but the audience must realize the overly predictable plot and single note characters are exactly what they are suppose to be. “This Means War” successfully put those ingredients together ending up with a great little comedy. If you are not willing to accept the fact that you aren’t watching “Citizen Kane” then be O.K. with knowing that this is not for you. For everyone else, I highly recommend “This Means War.”

DailE! News: Kourtney Dash is having a girl