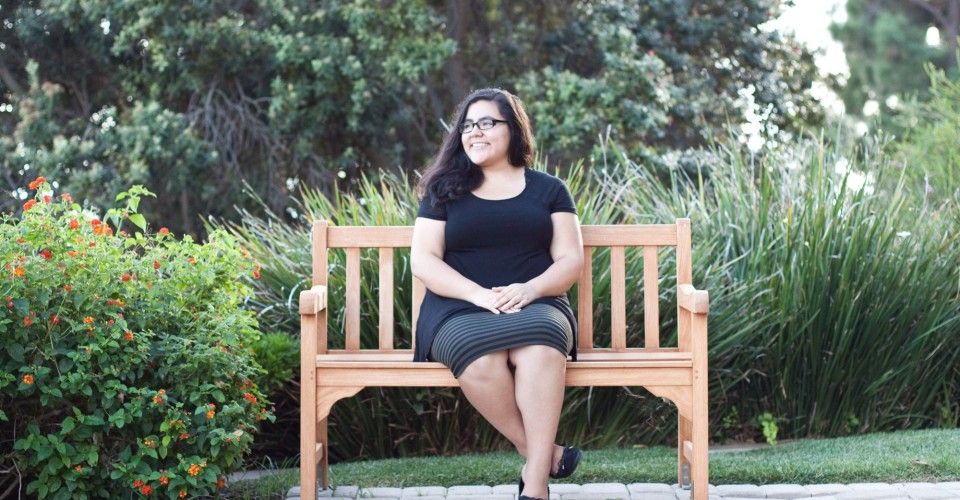 Jael Villalobos wore a pair of black-framed glasses with which she occasionally fidgeted. She sat at a HAWC table in a gray cotton T-shirt and a long jean skirt with her hair down and natural.

Her ears were unpierced — in fact, she didn’t have any jewelry on. And if one looked closely, they might notice she didn’t wear any makeup.

She didn’t call any special attention to herself, and few probably knew that she was following a set of rules.

Villalobos is a first-generation college student; her mother is from El Salvador, and her father is from Mexico. Along with being a full-time chef, her dad is also a minister of an Apostolic church in her hometown of Palmdale, California. Villalobos compared the denomination to Pentecostal, though she said Apostolics are more strict.

When she came to Pepperdine, Villalobos said she had to grow a lot of confidence in her relationship with God, so that now she’s able to worship whenever she wants, wherever she wants.

“People around me shouldn’t affect the way I interact with God,” Villalobos said. “God made me beautiful the way I am. Why would I need makeup to change anything? Why would I alter what he’s already made perfect?” 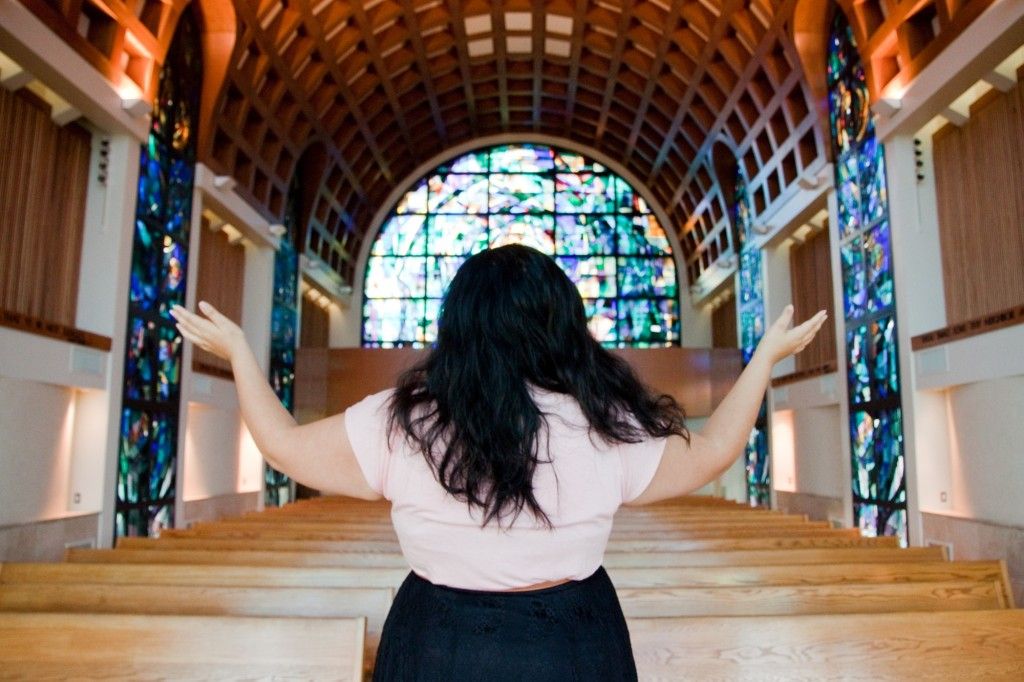 Compared to her home church, Villalobos said Church of Christ worship is very “hands by your side.”

“I’m definitely used to the evangelical kind of worship — very in your face, very loud and ad-libbing all the time,” Villalobos said. “I’m very charismatic, which I didn’t know had negative connotations until I came here. I bring the Pentecostal in, because I realize I can bring my worship to my God wherever I go.”

So Villalobos brings her worship to the University Church of Christ. She joined the Genesis Gospel Choir freshman year and is now a senior member.

“The gospel choir is one hobby I treasure so much,” she said. “It’s been that niche that really connects me to my Pentecostal roots in a sense.”

Her first week at Pepperdine, Villalobos was a pre-med Biology major before switching to Organizational Communication. However, the major change didn’t keep her from starting the Neuroscience Club her first semester on campus.

“I was really fired up, and I still do [neuroscience] as a hobby,” she said. “Off the bat, I had a passion for uniting students for common interests.”

By the end of second semester, she had started the Circle K International Club.

“We volunteer with the [Pepperdine Volunteer Center] and have a social aspect to it,” she said. “[There is] accountability for social service. I really love doing that. I spent two years with that one because that is a lot harder to establish. It was a lot more work, but worth it.”

When the majority of her classmates hopped on planes to go abroad sophomore year, Villalobos stayed behind to make sure the clubs were “healthy enough to be sustainable.” Her junior year, she was elected the president of the Latino Student Association. Now, Villalobos is the Inter-Club Council president.

“I love helping students and making sure that their events are accomplished,” Villalobos said. “It’s basically what I did for myself these past three years, so now I’m helping others achieve their visions. It’s the epitome of where I want to be.” 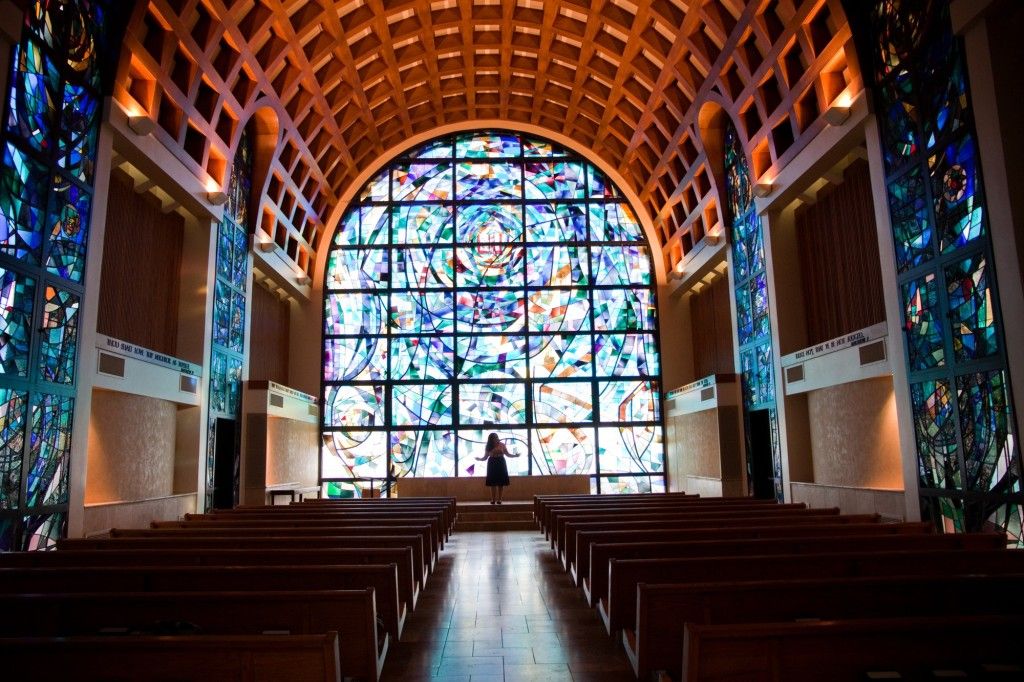 Asking seniors their plans after graduation often results in fear and trembling — but Villalobos remained calm.

“I have actually grown at peace with what I have planned,” she said. “Obviously it’s really subject to change. I’m just going to dive my feet into the workforce for things like conflict resolution and alternative dispute, helping mediate conversations between parties experiencing tensions and stuff like that.”

Spending around 20 hours per week with the ICC, singing in the gospel choir and studying for the GRE while simultaneously tackling 18 units, Villalobos said her favorite Bible verse is Philippians 4:13: “I can do all things through Christ who strengthens me.”

When asked where she gets her motivation, Villalobos immediately took out her phone.

“I want to show you a picture, because I know exactly where it comes from,” she said.

She placed the phone down, showing a picture of her hands and her mom’s hands next to each other. There was a stark contrast between the two — Villalobos’ hands are young and unscarred; her mother’s are red and swollen at the fingertips.

“Those are my mom’s hands after working 16-hour shifts,” Villalobos said. “This picture makes me want to cry. My mom is my ultimate motivation.”

She explained that her mother has been a self-employed housekeeper for almost 30 years, working seven days a week.

“I love her so much, and she sacrifices so much,” Villalobos said. “It’s super painful to see her just deteriorating slowly. It’s so horrible. Her eyes, her ankles, just like everything.”

She laughed nervously, saying she was already tearing up, and her eyes began to well up.

“The strain of working almost 16 hour days, seven days a week — like who does that?” she asked. “She does so much for the church, for me and my brother. I could never repay her. But I want to do everything that I can to repay her, in whatever capacity I can. I want her to be well-off. I want her to stop working, which is almost impossible, because she’s a workaholic, too.”

In high school, Villalobos said she would catch up with her mother through midnight conversations.

“I would stay up when I had to study, and she would be my motivation,” Villalobos said. “I would say, ‘OK, I’m not going to finish,’ but then my mom wasn’t even home yet, so how could I have an excuse? Seeing people work hard is a huge motivator for me.”

Though her father also works full-time, she considers him more of a stay-at-home dad.

“He cooks, he does the laundry, and he cleans the house on top of his other job, because my mom works,” Villalobos said.

Villalobos said her father is her go-to when she needs to discuss something important, including questions about faith, and they speak in Spanish, since he doesn’t know much English.

“The biggest lesson I think I’ve ever learned: There are no simple answers,” Villalobos said. 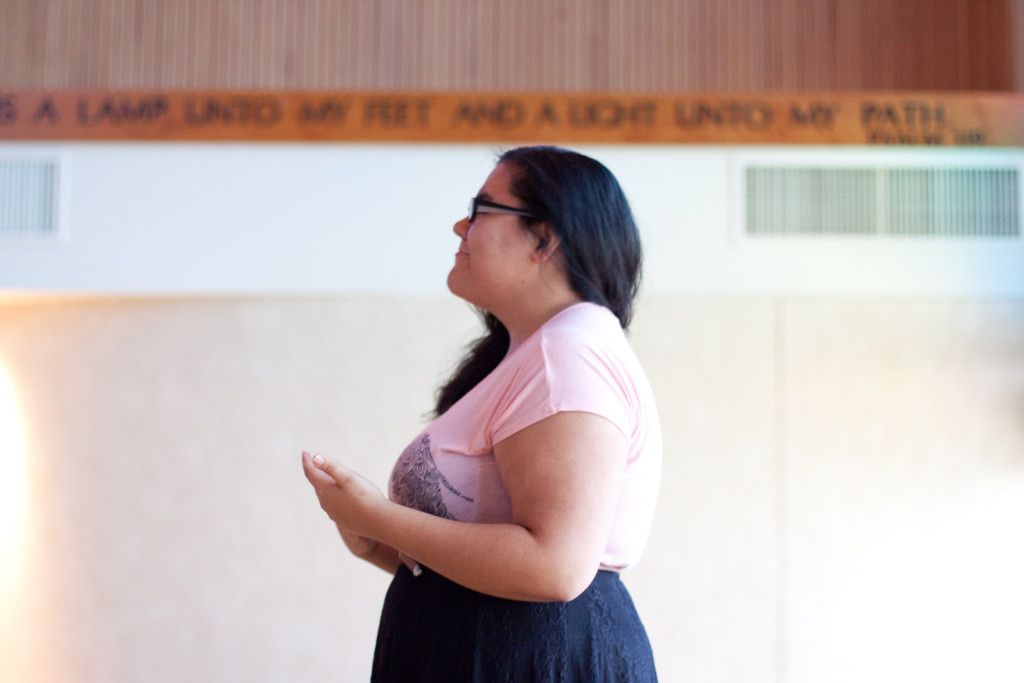 In her fourth year at Pepperdine, Villalobos said her religious perspective has changed immensely, saying she has realized God’s grace extends beyond some Apostolic boundaries. However, she still won’t be spotted donning a pair of blue jeans.

“I’m really highly convicted in making sure that I’m being as biblically aligned as possible, which is why I still don’t wear makeup,” she said. “Well, it’s a gray line. But I go along with the traditions I grew up with, simply because my parents grew a conviction in me through it and justified it in a way that made sense. I’ve grown up in that tradition, and I feel like it’s the lifestyle I’ve been called to.”

She explained her convictions in terms of organizational communication.

Why I (Still) Love The Churches Of Christ 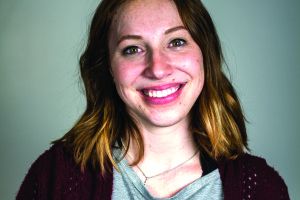 Photo by Daniel Caso The following interview is a preview of the upcoming edition of Currents magazine. For more stories...
Copyright 2013 Jupiter Premium Magazine Theme
Back to top