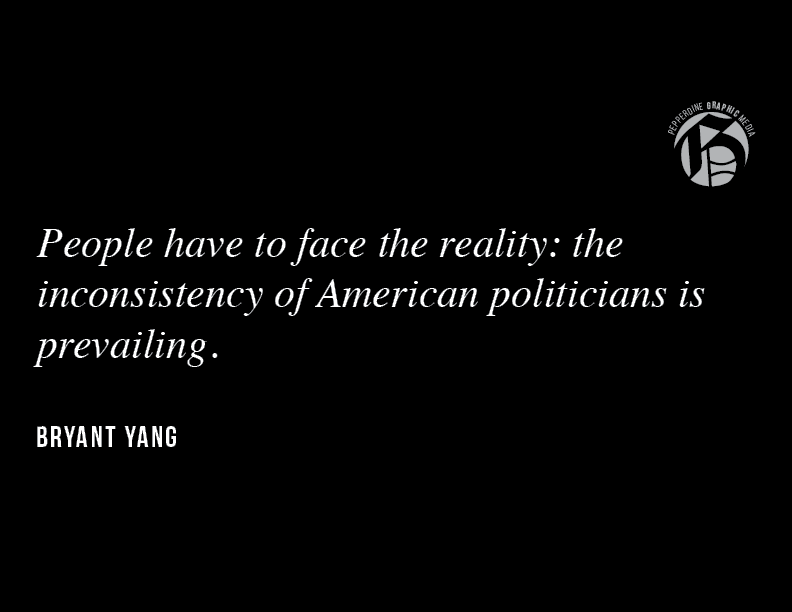 Recently, the storming of the Capitol exposed the hypocrisy and inconsistency of some American politicians.

After losing the 2020 presidential election, former President Donald Trump claimed the election was a fraud. To show support for Trump, his supporters organized the “March to Save America” protest in front of the Capitol in Washington, D.C., on Jan. 6. Eventually, many of these demonstrators stormed the Capitol during the Electoral College vote.

Several well-known politicians issued their statements about this storming. Senator Marco Rubio, R-Fla., tweeted: “There is nothing patriotic about what is occurring on Capitol Hill. This is 3rd world style anti-American anarchy.”

Politicians from both parties condemned the protest in front of the Capitol but, in the spring of 2019, Hong Kong’s Anti-Extradition Law Amendment Bill Movement won bipartisan support from American politicians.

Hong Kong’s Secretary of Security John Lee proposed a bill that allows foreign nations with extradition agreements with China to send criminal suspects from Hong Kong to mainland China. This proposal enraged many people in Hong Kong because adopting such a bill might enlarge the power of Beijing in Hong Kong. Eventually, Hong Kong’s Legislative Council aborted this proposal.

Democratic Speaker Nancy Pelosi called the large demonstrations in Hong Kong ‘a beautiful sight to behold,’ according to Reuters.

One might argue that the protest in Hong Kong deserves more sympathy because the demonstrators in Hong Kong were defending their city’s autonomy since adopting the extradition bill might allow Beijing to intervene in Hong Kong’s affairs. However, this argument does not stand because a good intention cannot justify bad consequences in politics, such as life-loss and disruption of civilian life.

A consequence is the result of an action, but an intention is a type of wish. Since a wish cannot totally determine one’s action, one’s good intention cannot justify the bad consequences that result from one’s action.

One might also argue that it is OK for America to support revolutions overseas because American democracy is inherently superior to other political systems. This argument does not stand either because American democracy is not inherently superior to other political systems and does not function well universally.

Some countries, including Liberia, have a political ideology and system that are highly similar to that of America. But such ideology does not prevent Liberia from scoring very high in the Fragile State Index and very low in gross domestic product per capita. On the contrary, China and Singapore are not democratic, but both have a fairly stable political situation and robust economy. China and Singapore show that lacking a democratic system doesn’t bar a country from success.

After reviewing the motivations behind American intervention in other countries’ affairs, we can see that the reasons are not always legitimate.

If American politicians are not always justified in intervening in other countries’ affairs, why do they keep doing so?

People have to face the reality: The inconsistency of American politicians is prevailing.

The underlying reason for such inconsistency in America’s politics is rooted in two typical American values: pragmatism and individualism.

In the 1870s, American philosopher Charles Sanders Peirce coined the term “pragmatism,” which would eventually become perhaps America’s most influential school of thought. Pragmatism is an approach that assesses the validity of theories or beliefs solely based on their practical usage. In other words, one can summarize the doctrine of pragmatism as “if something is useful, then it is good.”

Another traditional American value causing inconsistency in American politics is individualism. The idea of individualism became prevalent in capitalist countries, including the United States, after the French political scientist Alexis de Tocqueville coined the term. Individualism is the theory that favors individual liberty over collective control.

Since pragmatism and individualism are prevalent in American society, American politicians synthesize these two traditions and create a brand new moral code: If something is useful for me as an individual, then it is good. This new moral code penetrates every aspect of American life, and its effects are especially obvious in politics.

By using such a moral code, American politicians only evaluate political affairs based on their own interests, instead of objective facts. This way of evaluating political affairs causes them to be inconsistent in their policy-making process. Moreover, the harm of such a mentality is clear: Domestically, it enlarges the partisan division, while internationally it ostracizes America since having egocentric foreign policies could damage other countries’ interests and even threaten regional or global peace.

To fix this problem in American politics, both American citizens and politicians must give facts more weight and adopt the methodology of transpositional consideration.