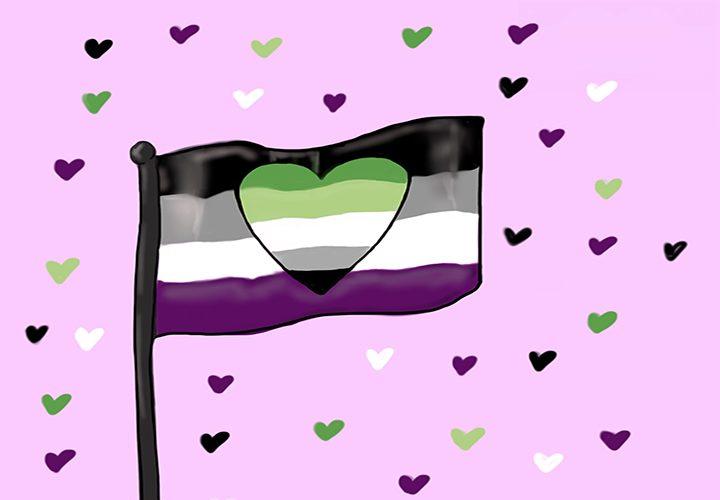 A boy and girl fall in love. They have a whirlwind marriage and have three children to round out the family. In this case, which is a heavily-exampled stereotype in the media, romance and sexual attraction are two peas in a pod — never to be seen as separate identities.

The LGBTQ+ community offers an alternative idea: the Split Attraction Model, or the SAM, to demonstrate the break between the sexual and romantic attraction spectrums, as stated by glaad.org.

The two main divides are asexuality and aromanticism. A person who does not experience sexual attraction is known as asexual, according to glaad.org. Aromantics, along the same line of asexuals, do not experience romantic attraction (goodtherapy.org).

“The thought that I would not want to have sex with someone — and then want a romantic relationship with someone — blows people’s minds,” asexual senior Grace Ramsey said. “Sex and love have been kind of conflated, I think, by a lot of people in society in general.”

The SAM is typically used with those who identify with the “A” in the LGBTQIAP+ community — 1% of the world’s population (lgbtqnation.com).

There are many stems branching from the asexual (ace) and aromantic (aro) trees. The asexuality spectrum spans 150 different types of sexualities and attractions and allows people to “explain how attracted they feel to sex and romance, and why,” according to lgbtqnation.com.

The main goal of the SAM is to demonstrate that “attraction and action are not always the same,” according to glaad.org. The community came up with this separation to explain that sexual attraction does not always dictate relationships but can be used by anyone, even those outside of the community.

Sexuality and romanticism are not so clear cut; there are gray areas between both divisions of the spectrum. This is known as gray-asexuality (gray-ace) or gray-romanticism (gray-aro), according to glaad.org.

Someone’s sexuality may fluctuate between and around the large spectrum, and these individuals are known as ace-flux or aro-flux (glaad.org).

“I’m sex-repulsed, but some people aren’t,” Ramsey said. “That doesn’t make them any less asexual, and that’s important to know. It doesn’t diminish someone’s identity. If someone is self-identifying as asexual, there’s definitely a reason.”

One misconception about the asexuality aspect of the SAM is that it is sometimes compared to celibacy, or choosing not to engage in marital and sexual relations. Celibacy is a choice, whereas asexuality is an inherent identity (lgbtqnation.com).

There is a stigma surrounding asexuality that claims it to be a mental illness. Mental health issues may cause people to have abnormally-low sex drives and distress during these situations, but this is not the same as asexuality because asexuals are not interested in sex and do not have bad physiological responses to it (goodtherapy.org).

Ramsey experienced this confusion when their doctor suggested hormones since they were not experiencing sexual feelings.

Just like some asexual people may choose to engage in sexual intercourse, some aromantic people may participate in relationship-specific milestones, such as cohabitation or raising children together. These strong romantic-like partnerships can be called queerplatonic relationships, according to asexualitytrust.org.

Representation in the Community and Media

Although the community seems large, Ramsey said they have felt excluded in the LGBTQ+ community and in the media.

“Asexuality is such a hard identity because it’s a lack of something,” Ramsey said. “It’s hard to prove a lack of. We’re called ‘not gay enough.’”

As the mainstream media tries to adapt to the growing number of sexualities, there are not many representations of the “A.”

One of the most well-known characters is Todd Chavez from “Bojack Horseman” (lgbtqnation.com). Another recent addition to the community is Florence from “Sex Education” (femestella.com).

“A character … brings up just kind of casually that she is asexual,” Ramsey said. “She’s dating and having relationships. I broke down crying as soon as I heard that because she was just describing something so chill. She mentioned that she was ace and then mentioned her girlfriend, and I was just like, Oh my goodness, that’s so awesome, because finally I feel like someone gets it.”

The two SAM communities each have grown together, though they both have their own pride flags.

The asexual flag has four stripes each representing a part of the asexual community. Black represents asexuality, gray for the area between, white for non-sexual allies and purple for the community, according to lgbtqnation.com.

The aromantic flag has five stripes. The dark and light greens represent the identity spectrum, white for friendship, and gray and black for the sexual spectrum (lgbta.wikia.org). 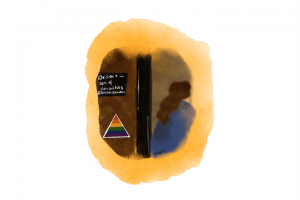 Art by Madeline DuvallAt Pepperdine, one can find stickers on professors' doors signaling the office as a safe space. Email...
Copyright 2013 Jupiter Premium Magazine Theme
Back to top