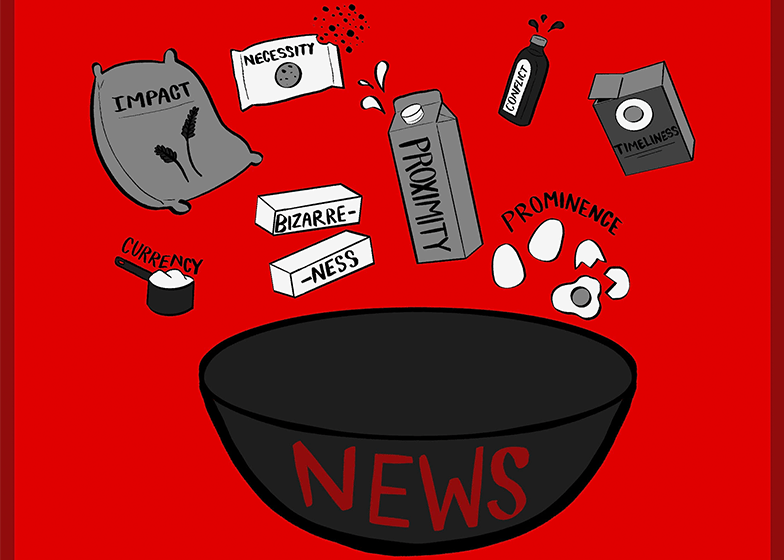 The news cycle is a household American phrase. It seems that every minute is occupied by this endless cycle of information, especially in today’s media landscape. But what exactly is it?

Technically speaking, a news cycle is the time that passes between the release of news editions, according to the Oxford English Dictionary. By this definition, that could be the time between editions of the newspaper or the few hours between television broadcasts. Now, it seems like there isn’t a moment that news isn’t breaking, and that changes the cycle, and what goes into it, according to an article from the New York Times.

“It’s hard to add a formula to it or any set of parameters,” said Stefan Holt Pepperdine alumnus c/o 2009 and news anchor for NBC 5 Chicago. “I think the cool thing about a newsroom is that it’s a team; we all work together and talk about issues and each one of us, as a member of the team, brings a different perspective.”

Typically, journalists use eight values to guide their decisions as to what is newsworthy and what isn’t. These eight values are impact, timeliness, prominence, proximity, bizarreness, conflict, currency and necessity, according to the book “Melvin Mencher’s News Reporting and Writing.”

In an anonymous April Graphic survey of 24 students, 19 said they believed impact was the most important of those eight principles, with timeliness and conflict coming in second and third.

“These eight news values do not exist in a vacuum,” Mencher wrote.

The values help but do not have final say over what makes the final cut, Holt said.

“I think what’s really been interesting the last couple of years is trying to figure out those shades of gray as to what makes a news story — what becomes part of the news cycle and what does get left out,” Holt said.

The process is ongoing, which is why newsrooms are full of conversations and debates as to what should be included in the next day’s edition, Holt said.

For some journalists, the right story is a little bit off the beaten path.

“What’s on the front page of the newspaper really isn’t something that I want to follow,” said Mark Jacobs, Journalism and Screen Arts professor and a television journalist of over 30 years. “What was compelling to me was the news stories that the newspaper wasn’t doing — the ones they weren’t paying attention to.”

Sometimes, with a little more digging, more stories can be found off the front page. Jacobs recalled his time at Fox 6 News in San Diego, when on Sept. 11, 2001, he and his team dug a little further and found that a local aviation company had trained the terrorists who flew into the World Trade Center. Jacobs’ reporting also focused on what mattered to San Diegans, which highlights how important consumers are to the news cycle.

“A news organization has to understand who the viewers are,” Jacobs said.

While journalists are ultimately making decisions on what stories should be covered, there are outside factors that impact those decisions.

“Application depends on those who are deciding what is news, where the event and the news medium are located, the tradition of the news medium, its audience, and a host of other factors,” Mencher wrote.

Demographics differ from place to place, and what may apply to one place may not apply to another, Holt said, adding that NBC 5 broadcasts all across northern Illinois and Indiana, and the city of Chicago itself is very diverse.

“We have to make sure that we are inclusive in our coverage — that the people care about what we’re talking about,” Holt said.

In the age of digital media, the cycle is ongoing. The 24-hour news cycle has been around for over 40 years now, which popularized live coverage of events as they happened, according to CNN’s website. Consumers have become familiar with breaking news and reporters receiving updates as an event unfolds.

“When I say spot news, you know those incidents that happen that become the forefront of our thought process because we saw smoke, we heard a gunshot, there’s been a commotion,” Jacobs said.

Nowadays, breaking news is easily printed and broadcast; the internet aids in that process, Jacobs said.

“News doesn’t have a time constraint — people do,” Jacobs said. “It’s going to happen around the world, around the clock, and so the internet is 24/7. You can access it anytime.”

In the end, the news involves both journalists and consumers in a cycle that requires time, deliberation and dedication, Holt said.

“I wish people could see the team effort that goes into each and every newscast or each and every periodical or news article,” Holt said. “It really is a team effort behind this, and we’re hard on ourselves. I think we’re genuinely passionate about what we do.”