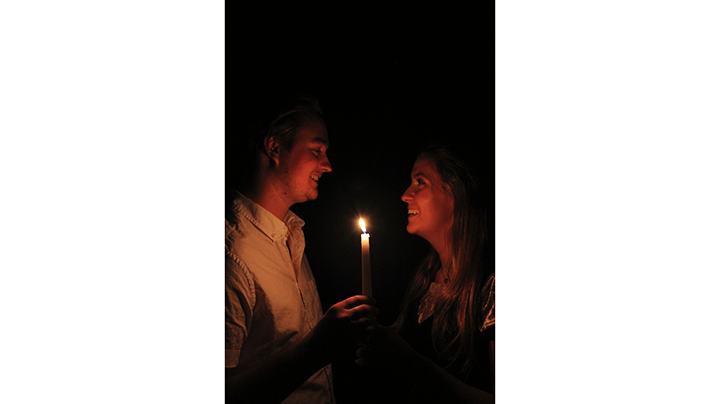 In relationships, the initial attraction is like falling off a cliff.

Love is everything that follows.

Senior Jordan Stratton, who proposed to his fiancée, senior Erin Miller, in December 2019, said infatuation can “hit you upside the head.” He used the cliff metaphor to explain the initial feeling of being attracted to everything physical and emotional about a person.

Linda DeVillers, adjunct professor at Pepperdine’s Graduate School of Education and Psychology and licensed psychologist, said it is dismissive to think that undergraduate students only experience “puppy love.”

DeVillers said it is more accurate to say people, undergraduate students included, “grow to love,” rather than “fall in love.”

Love as growing through images

Stratton and two other students defined love using images that evoked the idea of growing to love a person — an idea DeVillers said comes from German psychologist Erich Fromm.

Schulze said she met her boyfriend, junior Luke Dorais, during their first year at Pepperdine. The growth of her relationship with Dorais was a process that eventually picked up speed.

“And then as I like, got to spend more and more time with him — he met my friends, he met my family — it’s like building the snow, getting into this like huge ball, and then it gets really rapid, like really fast,” Schulze said.

Schulze said her relationship with Dorais was fast moving, as they said “I love you” to each other rather quickly, but it did not immediately sweep her off her feet. Their relationship and love for each other grew as their connection did.

“And you know, like we’ve only been together for over, a little over two years now, but I feel like I’ve known him forever,” Schulze said. “I’m 100% confident I’m going to marry him.”

After dating since their first year at Pepperdine, Stratton said the consistency and security of Miller always being there for him contributed to his idea of love and their journey there as a couple.

“I probably can’t even tell you, like, the exact day that I’d say, ‘Yes, I love Erin Miller,’ but it happened somewhere along that road after the cliff fall,” Stratton said. “And, it happened through, like, consistency of us, like, being that good team and, like, working together to do some cool stuff.”

Junior Morgan DeVico also conceptualized initial attraction with a metaphor similar to Stratton’s. She is engaged to Tyler Leitzel, who she has known since they were young, and they have been dating for just over a year.

“There was a very long period of just like, we’re just friends and we’re getting to know each other, you know, but like, as soon as we started dating, it definitely felt like that, like, kind of like falling off the cliff,” DeVico said. “You know, it was just like an ‘OK, this is it kind of thing, you know what I mean? Like, we just very much clicked.”

DeVico said real love doesn’t develop unless there is a basis of friendship and real experience. Because they had already established a friendship, a romantic relationship flourished, and they fell in love quickly.

“I think that’s when you experience love, but I don’t think love is falling off the cliff,” DeVico said. “I think love is being caught.”

Loving with the head and the heart

The concepts of love that all three students hold align with the idea of loving with their head and heart, which DeVillers said has been called practical love. Both head and heart cause a person to consider the circumstances and implications of a relationship.

“That’s where the head comes in — that, I’m attracted, but I may need to put the brakes on here,” DeVillers said.

Stratton and Schulze agreed with the importance of the head and the heart in their respective relationships. Schulze said her connection with Dorais shows her that love is about security.

“He can just read me — it’s almost like he’s psychic,” Schulze said. “I don’t know, he can just like read my thoughts and we’ll say things at the exact same time. Like, we’re just, it’s on a different level.”

After dating for over two years, Schulze said love is knowing the person is always going to be here. The survival of Schulze’s relationship with Dorais while they were attending separate abroad programs showed her this, as she attended the Lausanne, Switzerland, program and he the Heidelberg, Germany, program. Even with this distance, they made sure they saw each other almost every weekend.

“Like when you love someone, you put in all this effort to see them, to be with them, just to continue that relationship,” Schulze said.

Stratton said he believes love is a commitment to grow with a person.

As DeVillers explained, this emphasis on growth in a relationship, whether it be growing to love or growing as people, is necessary to fully understand love.

Stratton and Miller demonstrate this, as he said they are probably the longest-standing couple from New Student Orientation in their class. As they have grown in their relationship and as people, their love has blossomed, leading them to schedule their wedding for May 8.