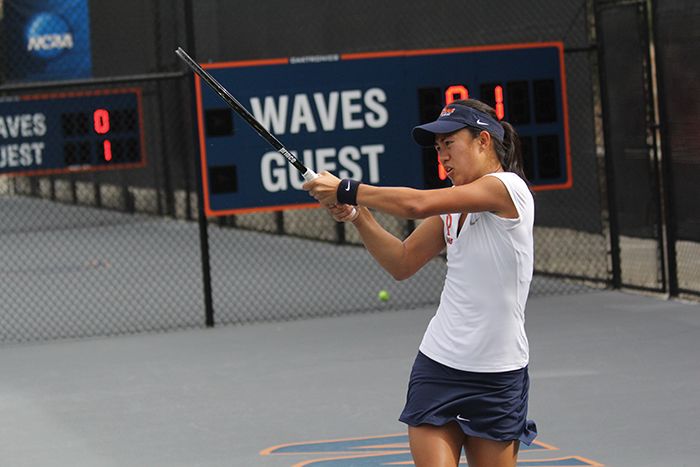 The women’s tennis team is the undisputed leader in the WCC. Over the weekend, the Waves moved up 11 spots in the national ITA rankings to No. 29 and swept the WCC weekly honors in singles and doubles for the fourth time this season.

“Our goal this year is to win the conference and get into Nationals,” said freshman Apichaya Runglerdkriangkrai, better known as Jean.

Runglerdkriangkrai and partner Lorraine Guillarmo took the WCC Doubles Team of the Week honors, and Guillarmo was also Singles Player of the Week. This is the sixth time in eight weeks that Pepperdine has received the honor in doubles, and the second time for Runglerdkriangkrai and Guillarmo. The team has also produced a Singles Player of the Week honor four times this season, and this week marks a league-best third time for Guillarmo to be honored by the conference.

“I like this team very much. They feel good about themselves and they know they’re good,” Head Coach Gualberto Escudero said. And they have had the results to back up what he’s saying. The team has been on a six-game winning streak since the beginning of March, even ending the reign of Long Beach State, a team that had not lost at home since 2012 — all this despite losing players to sickness and injury in the past two weeks.

Runglerdkriangkrai was moved into the No. 6 spot on the team to replace a teammate who is out for the season due to injury. Despite the loss for the team, Runglerdkriangkrai has stepped up on the court in spectacular fashion, playing in No. 1 doubles and No. 6 singles. Runglerdkriangkrai’s sound victories in her singles and doubles court contributed significantly in the win against BYU this past weekend. It allowed teammates freshman Yuki Chiang and sophomore Matea Cutura, dealing with injuries and overcoming illness, to default their matches. The Waves still took home the win.

The team is on the road to take on Washington State today, Gonzaga tomorrow and Portland the day after.

“We’re better than those teams so we better win,” Escudero said. The stress of traveling to three different places to compete and playing away from familiar facilities makes this a tough trip, but Escudero remains confident. “I feel good about our chances,” said Escudero. “We have to stay healthy, get healthy, and be the No. 1 seed going into the tournament. Then hopefully we can win and represent Pepperdine in the National Championship this year.”

The Waves won the conference last year but fell in the first round of the championship. However, Escudero believes that this year’s team is stronger than past years. He is confident that they can get through the first round and have a strong chance of getting through the second round as well.

“I think we have a strong team this year … I love all the girls here and I think that we get along very well with each other … we started the season very well and are currently No. 1 in the conference and unbeatable,” Runglerdkriangkrai said. After three games this week, the Waves have another three games at home before they go to the conference tournament.