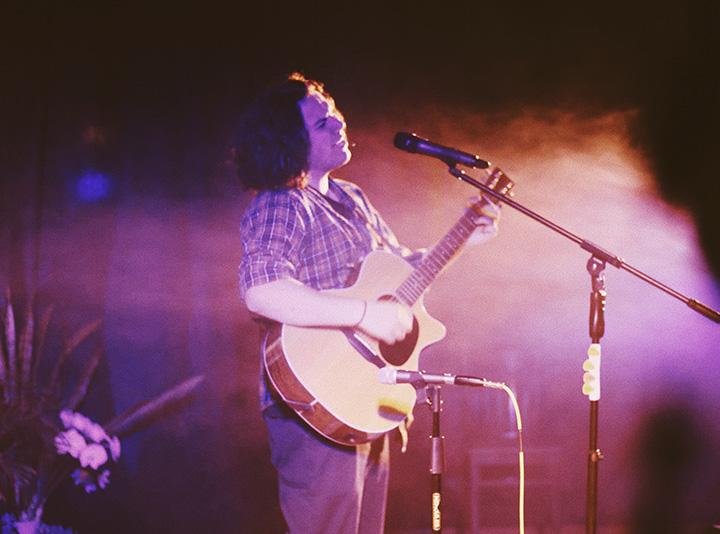 Senior singer/songwriter Taylor Mathews performs original songs during a concert for friends in the Lausanne, Switzerland program in 2019. While abroad, Mathews said he explored more of his spirituality and found peace with it through the community there and time he spent alone.

In the struggle to find his own intrinsic value and a means for authentic expression, senior Taylor Mathews, a Film Studies major with a minor in Philosophy and Great Books, turned to the comfort that songwriting brings.

His roots in a predominantly Christian household exposed Mathews to music at an early age. Growing up singing hymns, playing the piano and writing songs later sparked an almost divine connection for Mathews when he said he picked up his grandfather’s guitar for the first time in high school.

“I think back to what my headspace was in that moment and I didn’t know what chords were,” Mathews said. “I didn’t know how to hold [the guitar] with my hand, I didn’t really know how to strum or finger-pick or anything and I was still trying so hard to just play something. At the time it was this really magical thing.”

Mathews’ grandfather, who he described as his musical hero, let him keep the acoustic guitar named “Teresa,” after his grandmother, and he said his obsession with the instrument quickly ensued.

Songwriting, Mathews said, became a process of catharsis; a way for him to turn feelings into something creative. His lyrics confront the self, his experiences and perceptions of what it means to be human and more particularly what it means to be “good.”

He said his upbringing, which instilled in him a kind of moral elitism, naturally made some of his music more self-deprecating as he worked through an internalized hatred of his own humanity.

“I think I held that sentiment a lot, especially in high school, you know, you would have rather just not have been born in the first place,” Mathews said. “And that is a really hard mindset to hold onto; an emotion to go through because it’s like, you don’t consent to being born so it almost feels like a curse in some ways.”

This kind of raw authenticity is what Mathews said he strives to maintain in his music. In his search to find value within himself, Mathews often writes about finding it in romantic relationships instead.

“If a person loved me romantically then that meant I had value, not that I had value in and of myself,” Mathews said.

In his song “The Dance,” Mathews explores this concept: “The ghosts in the rafters see through my soul/ They’ve walked this path before, they know how it goes/ I don’t think I can do this again, not on my own/ But I can feel you in my aching bones.”

While his music often touches on the rawness of his experiences, Mathews said it’s not integral that all music does the same.

“Music can just be fun,” Mathews said. “It doesn’t have to be this grand artistic exploration of the human condition, it can just be a mode in which you forget that you’re human and just dance and have a good time and forget about your fallibility in many ways.”

Gabe Deibel, who has known Mathews since they met in the eighth grade, described Mathews’ songwriting as purposeful and lyrically precise.

“It’s not your typical verse-chorus-verse-chorus sort of thing; it’s more like stories that kind of expand and compress,” Deibel said. “To really navigate through them you really just have to pay attention to what he’s doing lyrically.”

Throughout their friendship, Deibel said he has always admired Mathews’ strong sense of himself, a kind of carefree confidence that inevitably influences his music.

“Taylor has an ability to kind of get to the spirit of what he’s talking about,” Deibel said.

Life through a colored lens, Deibel said figuratively, is how Mathews lives — with gratitude and a kind of moral clarity. Mathews immediately opened his home to Deibel when he was homeless after the Woolsey fire of 2018 — just one example, Deibel said, of Mathews’ genuine care for others.

From a young age, Mathews said he felt a sort of responsibility to pursue truth and understanding that now bleeds into his love for reading philosophy and an openness to exploring spirituality.

“There’s something paradoxical about any kind of faith and it becomes very confusing and it’s hard to wrestle with and find peace with that,” Mathews said.

Referencing the works of Nietzsche, Kierkegaard and the Tao Te Ching, Mathews reflected on his reading of the nature of truth and ultimately settled on the importance of perspective.

“One thing I have learned is that there is no such thing as, in my opinion, a perfect faith or perfect spirituality by virtue of it manifesting itself in a finite world in some way,” Mathews said. “You can’t have perfection in that which is imperfect, I would say, because that is the nature of imperfection, but there is nothing wrong with that.”

Mathews said he believes all art is a subjective experience, and while there are objective concepts that can be adhered to in creating music, they are not necessary. He looks up to artists like Leonard Cohen, Phil Elverum and Sufjan Stevens, for the primitive-like nature of their authenticity.

“[Their music] is grounding in many ways, like a retrospective journey,” Mathews said. “I’ve always loved artists that are very honest about their lives and what they’ve been through and I’ve tried to do the same thing.”

This reverence for honesty, however, can easily turn into a kind of enslavement, he said, as he remembers that storytelling inevitably presupposes embellishment. While authenticity is integral to his songwriting process, he tries not to expect the same from every artist.

“If you’re sitting around only waiting for authentic artists then you’re not going to be listening to a lot of music and then you’re missing out on everything,” Mathews said. “Because they are a dime a dozen, and I don’t think I’m particularly unique or special anyway.”

Since Mathews’ songwriting is centered around his relationships and experiences, he said his music is often a confrontation with memory and a grappling with the flawed nature of retrospection.

“Do we remember things correctly?” Mathews questioned. “Do relationships blur together? Do our memories of people hold their own autonomy in our minds or is everything just this messy conglomeration of everything we have ever experienced? And I mean memory can be a very selective thing.”

Through this exploration of memory, experience, values and truth, Mathews said he uses songwriting as a means to reflect and come into himself.

“It’s sometimes easier to look back and really think about what happened,” Mathews said. “And then other times it happened yesterday and it’s really fresh so I write about it in the moment and then I get to look back on it months [or] a few years later, and I get to see exactly what it was I was feeling; so it’s just about evolution as well, you know, this becoming more yourself.”

Mathews has not released his music to the public yet, but said he hopes to eventually. Meanwhile he is in a constant state of writing and recording songs to keep in his own personal archive and play back later or to share with close friends.

Regardless of whether his songs earn him a living one day, Mathews said music will always be an integral part of his life — a journey of exploration and discovery that continues even if he stops playing along.