Transfer Jared Maguire poses for a "classic, awkward" headshot in his living room. Maguire has planned to graduate in spring 2021 with a degree in Finance. Photos courtesy of Jared MaguireSenior Jared Maguire said he knew Pepperdine was the perfect school for him even after he got rejected during his senior year of high school. Maguire has made many memories throughout his … END_OF_DOCUMENT_TOKEN_TO_BE_REPLACED

Photos courtesy of Katherine LeeSophomore Katherine Lee flows into a split leap while performing at her local theatre in Orange County. She said she dreams of dancing at Pepperdine. Sophomore Katherine “Katie” Lee transferred to Pepperdine this semester to pursue a degree in Psychology. Lee said she hopes to join Dance in Flight once students are able to safely … END_OF_DOCUMENT_TOKEN_TO_BE_REPLACED

Photo by Marisa Dragos There's a new campaign curating coffee and community on campus. Student Affairs launched an initiative called Coffee with a Transfer to foster friendships between transfer and non-transfer students. Any Pepperdine undergraduate student can fill out an online form with a little bit of information about themselves, and the Office of Student Affairs … END_OF_DOCUMENT_TOKEN_TO_BE_REPLACED 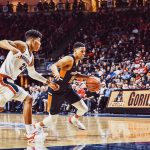 Photos Courtesy of Morgan Davenport Only a few people learn the lesson of never giving up. Eric Cooper has learned it quite well. Born in Hamburg, Germany, Cooper unknowingly began his basketball career when his dad, Eric Cooper Sr. put a basketball in his crib. His father played basketball overseas in the early part of Cooper’s life. Now Cooper’s been playing for … END_OF_DOCUMENT_TOKEN_TO_BE_REPLACED