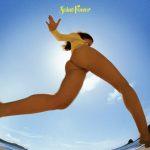 Lorde frolics on a sandy beach beneath the sun rays for her "Solar Power" album cover — one of her friends took this photo without the intention of making it the cover. The self-proclaimed "prettier Jesus" released her stellar third album on Aug. 20, to which she wrote and co-produced all its tracks. Photos courtesy of lorde.co.nz Kiwi singer-songwriter Lorde broke her … END_OF_DOCUMENT_TOKEN_TO_BE_REPLACED